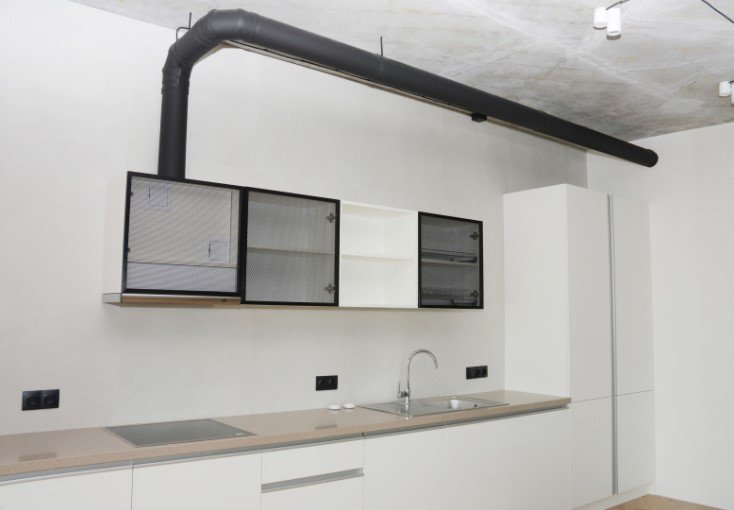 Range hoods keep us cooking and breathing comfortably by sucking up contaminated air and sending it outside. And even though we may not be able to see it, all of that air being removed also needs to be replaced or made up.

While some homes have plenty of cracks and crevices for make up air to enter, others don’t. And that can lead to poor hood performance and even safety concerns.

In this article, I’ll be discussing what make up air is, why you might not have enough, and solutions to keep you cooking comfortably and safely.

What Is Make Up Air?

The purpose of a range hood is to keep your kitchen air clean and smoke-free. And it does that by sucking up contaminated air and removing it. Well, one thing we often don’t think about is that when we remove air from a room, the same amount of air also needs to be replaced with make up air.

When your range hood is running, it’s pulling air in from directly above your stovetop. And you can see this happening as it sucks up smoke and steam while you cook. But, what you may not be able to see, is that the hood is actually pulling in air from the whole room, the rest of the house, and from outside.

If your hood is removing air faster than it can be replaced (made up), you’ll end up with a de-pressurized home. And that can have negative effects on the performance of your hood. Plus, there are some safety concerns with fireplaces, furnaces, and water heaters which we’ll talk about shortly.

Do You Have Enough Make Up Air?

In many cases, your home will naturally have the ventilation needed to replace all of the air being removed by your hood. This naturally occurring make up air enters your home through cracks and gaps around windows and doors, and through chimneys.

So if you live in an older house, especially ones that are particularly drafty, you probably have enough make-up air that you don’t need to make any changes.

But, that’s not always the case. Let’s talk about the situations where you may need additional make up air for your range hood.

The more powerful your range hood, the more air it will be removing from your home.

In most cases, the power of your hood will be rated in CFM. CFM stands for Cubic Feet Per Minute and it tells us how much air the hood is capable of moving.

So while it also depends on the size and ventilation of your house, if you have a hood with 900 CFM or more, you’re more likely to need additional make up air.

You Live In A Well-Sealed Or “Green Home”

One of the biggest goals when building a home, especially nowadays, is to make it as energy-efficient as possible. And that means making it air and watertight. Both things that lead to better insulation and more energy efficiency.

While an energy-efficient home is definitely a good thing, it also means there are fewer cracks and gaps for make-up air to enter.

In this case, no matter how weak or powerful your hood is, if there’s nowhere for it to pull air from, it won’t be very effective.

You Have A Small House Or Kitchen

If you’re living and cooking in a small space, there’s less air available for your hood to move. This situation can be made even worse if you also add an overly powerful hood to the mix. As there’s a good chance it will be trying to remove air much faster than it can be replaced.

You may be able to solve a problem like this by using a less powerful hood. But, depending on your ventilation you may still need additional make up air for your hood to run safely and effectively.

Your Building Code Requires It

Some buildings will actually require the use of make up air systems. It may be required for all hoods, or only for hoods with a certain CFM rating.

This scenario is much more cut and dry and is more common in apartments and condos that don’t have the same level of ventilation as standalone houses.

What Happens Without Enough Make Up Air?

When your range hood is removing air faster than it can be replaced, you can end up with a depressurized home.

This imbalance creates a situation where outside air will try to force its way into your home anyway it can. And this can have a negative impact on your hood’s performance as well as some safety concerns.

First off, negative air pressure will hinder the performance of your hood. Without enough make up air in your home, your hood won’t be able to clear smoke and other fumes very effectively. And, it will put extra stress on the hood’s blower motor, which could affect its longevity.

Another way to think about depressurization is that it turns your house into a big vacuum. It’s trying to rebalance air pressure by sucking in outside air through every crack, crevice, and vent.

Not only can this lead to loud noises as air is sucked in under door jambs and through windows but it can cause potentially dangerous backdrafts.

Backdrafting is when air is sucked into your home through chimneys and vents that should only be sending air out of your house. Normally, the chimney or vent on a wood-burning stove, water heater, or furnace is sending smoke and carbon monoxide outside, away from the air we breathe.

But, with a backdraft, air is being sucked into the home through those vents along with all of that smoke and carbon monoxide. None of which we should be breathing.

How To Prevent Or Fix Negative Air Pressure

If you find yourself in a situation where your range hood is depressurizing your home, there are a couple of different solutions.

The easiest solution, which also happens to be free, is to simply open up windows and doors to the outside. This will allow air to freely enter your home and should be enough to replace the air that your hood is removing.

The upside to this, like I said, is that it’s free and easy.

The downside is that you’ll be exposing yourself to outside weather and temperatures. Maybe that’s not a problem during some months, but it could get uncomfortable when it’s freezing cold or blisteringly hot outside.

Make up air kits are ventilation systems designed specifically to replace the air being removed by your hood.

There are several different options that you can go with. The simplest and most inexpensive is a vent with a damper that opens every time your hood is in use. As long as that vent is at least the same size as your hood’s duct, it can bring in as much air as is being removed.

With this option though, you run into the same problem as if you were to open a window. And that is that you’re letting in outside air that could be extremely hot or cold.

Another, but much more expensive option is a heated and cooled make up air kit. These have small heaters and air conditioners built-in that heat or cool the air before it enters your home. Keeping you comfortable no matter what the weather is like outside.

Depressurization is only a concern with ducted range hoods that remove air from your home.

By going with a ductless range hood, you never have to worry about depressurization because these models clean your air and recirculate it back into your home.

No air is actually removed, so no air needs to be replaced.

Do I Need Make Up Air In My Kitchen?

You may need additional make up air in your kitchen if there is not enough ventilation to replace the air your hood is removing. This could happen if you have a very powerful hood, a small kitchen, or a very well sealed and insulated home.

What Happens If I Don’t Have Make Up Air?

If you don’t have enough make up air you could end up depressurizing your house. This will cause poor performance from your hood and can cause backdrafts that pull carbon monoxide into your home.

Do I Need Make Up Air For My Ductless Range Hood?

No, ductless range hoods recirculate air back into your home. Since they don’t actually remove air, you don’t have to worry about replacing it.