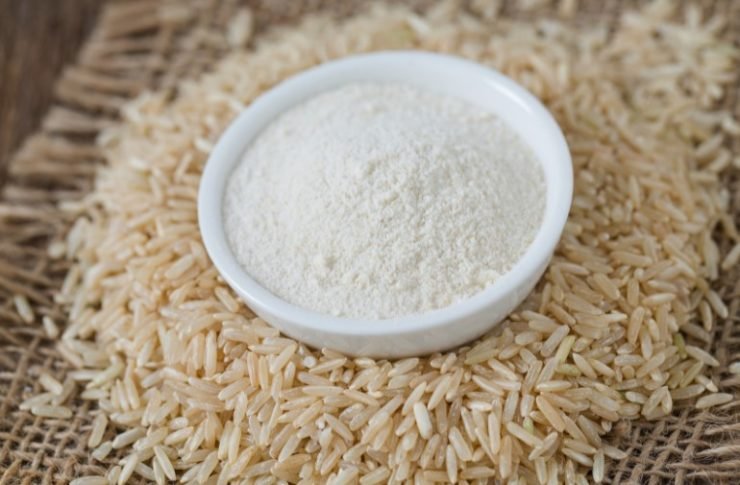 Brown rice flour is made by milling whole grain brown rice. It’s a fine-textured flour that’s gluten-free and is widely used for baking, frying, and thickening soups and sauces.

If you’re familiar with white rice flour, you can think of this as the whole grain version. Similar to the difference between white and whole wheat flour.

I wouldn’t say that brown rice flour is difficult to find, but it’s definitely not as widely available as some of the alternatives. So, if you run out or just can’t find it in your local grocery store, feel free to use one of these 7 brown rice flour substitutes so you can keep on cooking.

White rice flour is made from rice grains that have been refined, or polished. That means that the outer bran and germ layers have been removed so you’re left with a white grain rather than a brown one.

The two ingredients work very similarly and can be used almost interchangeably. But, white rice flour has a more neutral taste and it’s white rather than tan or brown.

While white rice flour doesn’t have AS much flavor, the flavor of brown rice flour is still relatively mild. So chances are you won’t really miss it in most recipes.

Overall, this is going to be as close as you’ll get to the real thing. And it works great in baking, thickening, and deep-frying. Not to mention, it’s usually easier to find than brown rice flour too.

Make Your Own: Have rice but no rice flour? You can easily make your own by finely grinding raw rice grains in a food processor or blender. This can be done with white or brown rice.

Sorghum is an important grain in Africa, Asia, and the Middle East. It’s also a popular ingredient in Southern cooking and is slowly gaining popularity throughout the rest of the country. All that to say, it may not be as easy to find as some of the other options.

This is a great option when it comes to gluten-free baked goods. But, you’ll want to use some additional binders like eggs or xanthan gum to keep things from getting too crumbly.

Tapioca flour is made from dried and ground cassava roots. This is another gluten-free option that can be used for just about anything you would use brown rice flour for.

Tapioca flour has a mild, almost neutral flavor, with a very slight sweetness to it. While it works well in sweet and savory applications, I find it fits in particularly well-baked goods and desserts. It’s even become my go-to starch for thickening fruit pie fillings.

Same Same, But Different: You may also find tapioca starch rather than flour. The two are not exactly the same but they are made from the same plant and will yield very similar results. Feel free to use either one here.

Potato starch is made from the trusty potato and it makes for an excellent substitute for brown rice flour in most situations.

It has almost no flavor of its own, which means it won’t have a drastic effect on the taste of any recipes you use it in. It’s also gluten-free and behaves almost the same as rice flour for thickening, baking, and frying.

Wheat flour is an incredibly versatile ingredient. All-purpose or whole wheat flour can both be great brown rice flour substitutes, but they come with some caveats.

First, wheat flour is not a gluten-free option.

Second, wheat flour behaves very differently than rice flour when cooked. So, while it can be used for just about anything, you may need to make some recipe adjustments to your recipe in order to get the best results.

That could mean using less liquid, fewer binders, or even just less mixing.

Almond flour is made from finely ground almonds. Since this option is made from a nut rather than a grain, it doesn’t contain nearly the same level of starch as rice flour or any of the other alternatives.

Almond flour also has a relatively strong flavor compared to most of the other options. The almondy flavor makes this option best suited for sweet baked goods and also makes a delicious coating for fried fish or chicken.

Millet flour is made from finely ground millet, another gluten-free grain. Millet flour makes for an excellent brown rice flour substitute to bake with, especially for cakes and bread. It’s known to produce a very light and cake-like texture in many baking recipes.

Millet can have a fairly pronounced nutty flavor with a slight sweetness to it. It works well in both sweet and savory applications. But you may consider combining it with another flour to keep its flavor from becoming too overpowering.

There are a lot of great brown rice flour substitutes that are pretty easy to swap into a recipe.

While no alternative will perfectly replicate the flavor and color of brown rice flour, you also don’t have to worry about them having a drastic impact on the flavor of a dish either (except for almond and millet flour).

As with any ingredient substitute, it’s always a good idea to get to know and taste an ingredient before using it in a recipe.

What Can Be Used Instead Of Brown Rice Flour?

White rice flour is the best and most similar ingredient to brown rice flour. It has a more neutral flavor and lighter color, but it behaves almost the same when used in most recipes.

Can You Substitute Brown Rice Flour For All-Purpose Flour?

Can I Substitute Almond Flour For Brown Rice Flour?