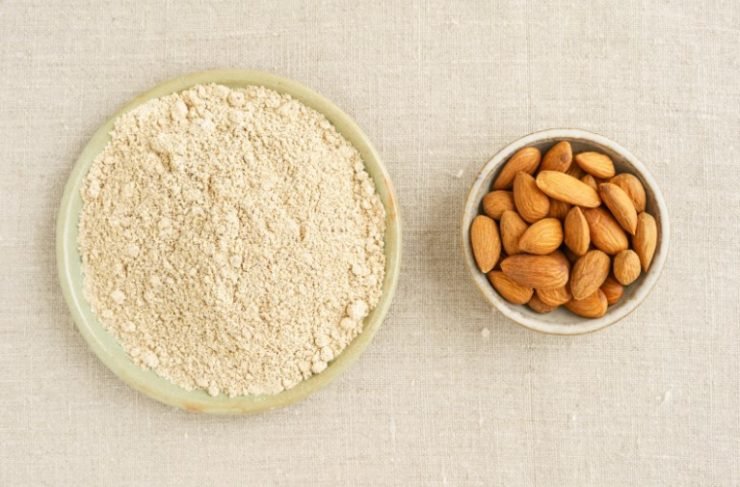 Almond flour is made from finely ground almonds. You can find it in a couple of different forms, with the more coarse version often being sold as “almond meal.”

Almond flour is most commonly used in baked goods, working particularly well in sweet applications like French macarons and financiers (which you should definitely make once you get more almond flour).

While it’s difficult to replicate the almond taste, there are several options that are easy to substitute and will provide great results. So, without further ado, here are the 7 best almond flour substitutes to get you through in a pinch.

What Can I Substitute For Almond Flour

Cashew flour is made from finely ground cashew nuts. This is the same process used for making almond flour. That leads to an end product that has a very similar color and consistency.

That’s a big plus when it comes to using it as an almond flour substitute. While the flavor of your recipe will taste like cashews rather than almonds, the texture and consistency should remain the same.

As another bonus, you can substitute cashew flour in the same amounts as you would use almond flour, and your recipe can remain gluten-free.

While sunflower seeds aren’t technically a nut, the flour made from them also has a very similar consistency to almond flour. That also makes this a great option if you or someone you’re cooking for has a tree nut allergy.

Sunflower seeds tend to lean more savory than sweet, but it’s another great option that won’t have any major effect on the texture of your recipe. And it can be substituted in equal amounts.

While the texture should remain the same, sunflower seeds do contain chlorophyll and that can end up adding a green tint to some recipes.

Green Be Gone: The green color won’t affect flavor or texture, but you can neutralize the reaction with cream of tartar or an acid like vinegar or lemon juice.

Macadamia nut flour is another substitute that provides similar cooking and baking characteristics. Color and texture is about the same, and it has a less pronounced flavor compared to cashews and sunflower seeds.

You can use macadamia nut flour as a 1:1 substitute for almond flour. But since macadamias are one of the most expensive nuts around, the flour can get quite pricey.

No Conversions Necessary: Since most nuts have a similar fat content and will absorb the same amount of liquid, they can usually be substituted 1:1.

While nut flours will make for the best substitutes, all-purpose flour is a good option that’s also one of the easiest to find in any grocery store. And if you don’t have a gluten allergy, chances are you have a bag in your pantry right now.

You can substitute all-purpose flour with almond flour in equal amounts, but your end result will have a very different taste and texture. And again, if you’re dealing with a gluten allergy this option is out.

Oat flour is made from finely ground oats. It’s easy to find in many grocery stores, but you can also make it by simply grinding oats in a food processor or blender.

This is a great non-nut substitute that will also keep your baked goods gluten free.

Similar to all-purpose flour, you can use oat flour as a 1:1 substitute but the taste and texture will be quite different. It’s great in baked goods, but you’ll end up with a lighter and fluffier texture compared to almond flour.

Cassava flour is made from the starchy roots of the cassava plant, sometimes also called manioc or yucca. Cassava is a gluten and nut-free substitute that has a very neutral, but slightly sweet flavor. That can be a good thing if you don’t want any drastic change to your recipe’s taste, but the texture with this one can be tricky.

Cassava flour has a tendency to turn sticky and gummy when combined and mixed with liquids. So while you can use this as a 1:1 substitute in a pinch, you may not end up with the right texture that the recipe originally intended.

Pro Tip: Keep a small bottle of almond extract on hand to add almond flavor to any neutral flavored substitute.

All you need is to grind raw almonds in a food processor or blender. But, you will need to be careful you don’t blend them for too long. You can quickly go from almond flour to almond butter, not the worst mistake in the world but not that helpful as an almond flour substitute.

The same can be done with other nuts and seeds as well. So while the flavor won’t be exactly the same you’ll have a delicious homemade substitute and you’ll be saved from an extra trip to the store.

When it comes to almond flour substitutes, your best bet will almost always be an alternative nut flour. They can usually be substituted in a 1:1 ratio and won’t cause any major change to your recipe (other than a slightly different nutty flavor).

While non-nut flours can work in a pinch, they tend to have different cooking characteristics. And this will usually result in drastic changes to the end result of your recipe. So if that’s all you have, you may be better off looking for a different recipe or waiting until you can make a trip to the store.

What Can I Substitute For Almond Flour?

Almost any other nut flour can work as an almond flour substitute. The flavors will be slightly different, but the texture should remain about the same.

What Can I Substitute For Almond Flour In Macarons?

Cashew or macadamia nut flours both work well as an almond flour substitute in Macarons. You can also use almost any other nut or seed flour such as pumpkin seed or sunflower seed flour.

How To Substitute Coconut Flour For Almond Flour?