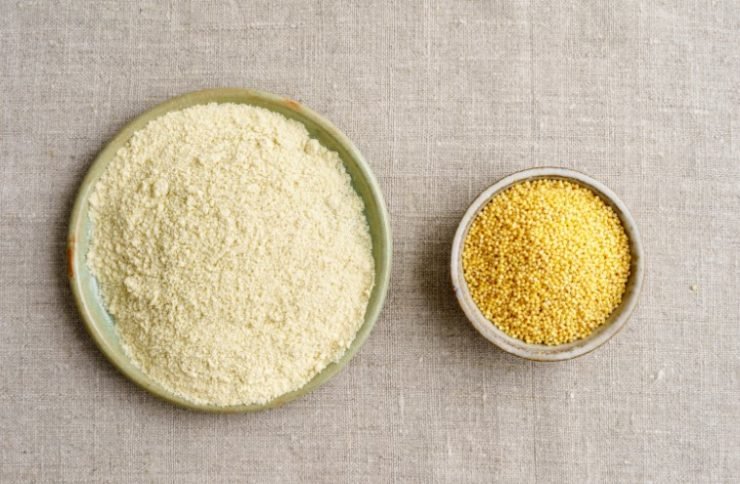 Ground finely from millet seeds, millet flour is a common gluten-free pantry staple. And luckily, there are plenty of alternatives to millet flour if you’ve run out for your favorite recipe.

The years I spent working as a pastry chef led me to switch to a gluten-free diet. Which meant a whole lot of tinkering with alternative flours at home. Based on the best flavors and textures, I’ve pulled together this list of millet flour substitutes.

If you’re getting ready to bake, make pancakes, or gluten-free bread, this list has a substitute for you. If you don’t need to avoid gluten, the last flour on the list will explain how to work with a common wheat-based substitute.

This cereal grain is one of the world’s most-produced crops. It also happens to make one of the best substitutes for millet flour. Use sorghum flour in sweet baked goods, pancakes, and flatbreads. It also helps to thicken soups and can be used to make a roux.

Sorghum is a whole grain with a mild flavor that’s a touch sweeter than millet. It has a soft texture that makes for fluffy cakes and tender cookies.

Being that it’s gluten-free, it’s safe for people with celiac disease. Ideally, sorghum is best when mixed with other flours and starches for gluten-free baking.

Use it as a 1:1 substitute for millet flour if you’d like to try using it alone. But be prepared to add extra liquid to your recipe, as it is a more absorbent flour.

Rice flour is an easy and affordable replacement for millet flour in baked goods, yeasted bread, and pancakes. Try it as a thickener in a pinch, too.

The two main types are white and brown rice flour. Both have a mild flavor, but brown rice flour is nuttier and has a darker color. Their light textures are a good match for millet flour.

Rice flours are also gluten-free, so they tend to bake better when combined with other starches and flours. They can be used on their own as a 1:1 substitute, but note that they can be prone to having a gritty texture.

Pro Tip: Sweet, or glutinous rice flour, is another rice flour that can be used in gluten-free baking as the main starch. As a primary flour, it adds a unique chewy texture. And despite its name, it does not contain any gluten.

This flour made from the cassava root replaces millet flour beautifully. It works well in sweet items like pancakes, cookies, and cakes. It’s also a remarkable substitute for tortillas and flatbreads.

Thanks to its mild flavor and super-fine texture, cassava flour is a champion in gluten-free baking. Its increasing popularity has made it easier to find in stores, too.

Yet another bonus of cassava flour is that it is grain and nut-free. So it’s safe to eat on the paleo diet and for people with nut allergies.

As with most gluten-free flours, cassava is more versatile when mixed with other flours. To use as a substitute, use ¾ cup cassava flour to replace every 1 cup of millet flour.

This tiny, gluten-free grain makes a reliable flour that can take the place of millet flour. It works well in baked items, breads, and tortillas. Its thickening ability also makes it perfect for breakfast porridge.

Amaranth flour has a slightly nutty taste that blends right into sweet pastries like cookies and muffins. It also plays well with yeasted recipes, so try it paired with other flours for delicious gluten-free bread.

This flour normally works better when blended with other flours and may require a starch in the blend for optimum texture. And since this flour is less widely used, it can be a little hard to find in remote areas, so it may need to be bought online.

Quinoa, the Peruvian staple, has unique qualities that make it a fabulous substitute for millet flour. Try it as a soup and sauce thickener and for flatbreads. It especially shines in baked goods by bringing a nice, light texture.

Quinoa flour has a mild, slightly nutty flavor that works with sweet and savory recipes. It’s also a complete protein, a rare quality for flour.

Some people find quinoa flour to have a slightly bitter taste. While I haven’t noticed this, it’s a cinch to alter the flavor before using it if you want to. Simply bake it in a 300°F oven or toast it in a dry skillet until lightly golden, stirring it often to avoid burning.

Finally, quinoa flour may require the addition of an egg or egg replacer in your recipe. The good news is that it can work as a 1:1 substitute in place of millet flour without any additional flours or starches.

Oat flour is an ideal replacement for millet flour, especially in baked goods. It makes flavorful pancakes and waffles and can also be used in yeasted bread.

This flour’s hint of sweet flavor makes it a close match for millet flour.

Oat flour can be made right at home if you have whole oats and a spice grinder or high-speed blender. Whiz them up until they’re a fine flour consistency. I have an old coffee grinder that I use for spices and oats to get a fine grind.

Of course, this flour can also be found pre-ground in stores. Either way, once you have your oat flour, it can be used as a 1:1 substitute for millet flour just like it is. You may need to add additional moisture to your recipe with liquids or eggs.

Pro Tip: Oat flour can contain gluten since oats are often processed on the same equipment as wheat products. Buy certified gluten-free oat flour (or oats) if you need to avoid gluten.

This nut-based flour can take the place of millet flour in cakes, pancakes, and most baked goods. It can also make tender gluten-free bread and pizza crusts.

Almond flour has a sweet almond flavor that tastes delicious in any sugary item. It can also be used raw in no-bake cookies. In addition, it’s nutritious and paleo diet-friendly.

Since almond flour is so high in fat, it may require more recipe tweaks than other flours. For example, it usually requires extra binding agents like eggs or egg replacers in baking recipes.

Use almond flour at a 4:1 ratio of almond to millet flour.

Pro Tip: Be sure to buy blanched almond flour for the best texture. Avoid almond meal, which is ground with the skins on. It can make for a dry and dense end product.

For those who don’t mind gluten in their recipes, all-purpose flour is a straightforward replacement for millet flour. It will hold its own in baked goods, bread, and pasta. It’s also a classic thickener for soups and gravies.

As its name indicates, all-purpose flour is great for its versatility. It’s also inexpensive, easy to find, and a breeze to use in place of millet flour.

Since it contains gluten and millet doesn’t, it will yield a different texture than millet flour-based recipes. Your finished product may be more chewy and moist.

All-purpose flour can be used at a 2:1 ratio in place of millet flour.

As you can see, millet flour is not a difficult flour to replace. Though gluten-free replacements may require some recipe changes, there are ways to make them work for you.

Starches will help increase the tenderness and moisture retention in your baking recipes. Starches are usually anywhere from 25-60% of a gluten-free flour blend, which varies greatly because each flour has a unique starch and protein content.

Some functional starches that you can try are tapioca starch, potato starch, sweet rice flour, and arrowroot powder. It can also be beneficial for some recipes with starches to let them rest for 15-30 minutes before baking for better hydration.

Also, consider adding a touch of xanthan gum to gluten-free baking recipes for extra binding power. Depending on the size of your recipe, it usually calls for ⅛-¼ teaspoon to be mixed with your dry ingredients.

Sorghum is a close gluten-free substitute for millet flour. It’s slightly sweet and has a light texture which is great for baking.

Can you substitute all-purpose flour for millet flour?

Yes, use double the amount of all-purpose flour to substitute millet flour, a 2:1 ratio.

Can almond flour be used to replace millet flour?