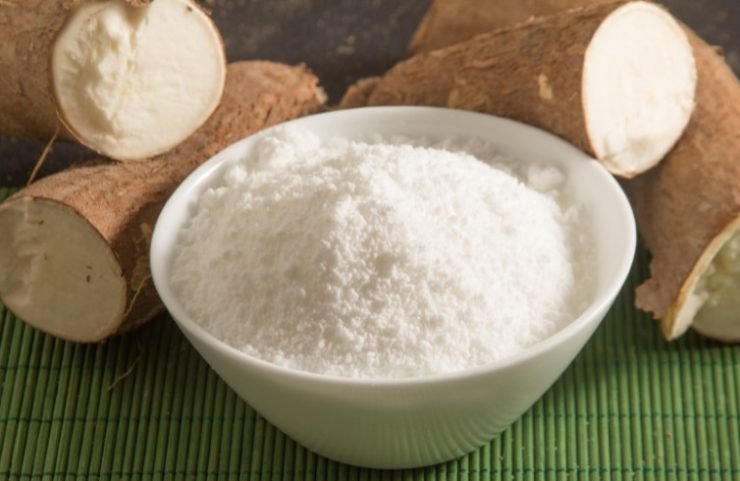 Tapioca flour is made by extracting the starch from the cassava root tuber. It’s a staple ingredient in gluten-free pantries and has a wide range of culinary uses. From thickening sauces and pie fillings, to adding a chewy texture to gluten-free baked goods.

Luckily, tapioca flour isn’t used for its flavor. In fact, it’s virtually flavorless, and that’s good news when it comes to making substitutions.

There are a wide variety of starches, most of them flavorless as well, that can fill in when you don’t have tapioca flour on hand. Each one with slightly different characteristics and best use cases.

So, here are the 7 best tapioca flour substitutes to keep you cooking without an extra trip to the market.

What Can I Substitute For Tapioca Flour?

If you want a substitute that’s as close to tapioca flour as possible, you might as well go with something made from the same plant.

And, since cassava flour is made this way, you get the added benefit of more overall nutrients and fiber.

In most cases, you can use the two flours interchangeably. And while not usually noticeable, cassava flour is not always quite as fine a powder as tapioca flour. But, it does have slightly stronger thickening power and more flavor, so start with just a little less than you would if you were using tapioca.

Cornstarch is made from the dried and ground endosperm of corn kernels. This starch is so common and widely available that it’s basically become the standard when it comes to thickening soups and sauces in most recipes.

So, even if you don’t already have a box in your pantry, you’ll easily be able to find some in just about any grocery store and maybe even some gas stations.

Cornstarch is another option that can be used interchangeably in most cases. It will keep your recipe gluten-free, and it actually holds together better and for longer than tapioca starch does.

That means you can add it earlier on in the cooking process and you don’t have to worry about it thinning out over time.

Arrowroot starch comes from a starchy tuber very similar to tapioca and cassava. And in some cases, arrowroot starch will even contain cassava root itself.

This is another gluten-free starch that can be used in equal amounts when substituted for tapioca flour.

Arrowroot starch even has an additional benefit that may have you reaching for it even when you do have tapioca on hand. Unlike tapioca starch, recipes that are thickened with arrowroot will retain their thickness even when frozen and then thawed.

That makes this a great choice if you do a lot of bulk meal prep and end up freezing portions to be eaten later in the week or month.

Kuzu starch (sometimes called kudzu or Japanese arrowroot) is a cooking starch made from the roots of the kudzu vine.

This is a substitute that you may not have heard of, but it’s widely used in professional kitchens as well as in China and Japan where the plant is native.

Here in the states, kudzu vines are an invasive species. And if you live in the south, I can almost guarantee that you’ve seen these plants covering trees and hillsides along the highways and roads.

Kuzu starch is gluten-free, can be used in equal amounts to tapioca, and has superior holding power even when cooked for long periods. Kuzu works great when used as a slurry, but tends to be lumpy when dry, making it slightly more difficult to use for baking applications.

Pro Tip: A lot of starches will turn liquids cloudy or opaque when used as a thickener. But not Kuzu. So, if you’re thickening a liquid that you want to stay clear, this is the best choice.

There are several different types of rice flour available, but white rice flour is what you want if you’re looking for a tapioca flour substitute.

The other options are brown and sweet rice flour. You can use brown rice flour in a pinch, but it can change the overall flavor and color of a dish. Sweet rice flour on the other hand acts quite differently than tapioca when cooked, so I would avoid that in most cases.

White rice flour is a solid all-around substitute that can fill in in most situations, whether it’s baking, thickening, or deep frying. And when it comes to thickening liquids, this is one of the easiest options to use.

While most starches require you to make a slurry before adding them to a soup or sauce, rice flour can be whisked directly into simmering liquid without lumps forming.

Pro Tip: If you don’t have any other good substitutes on hand, but you have dry white rice, you can easily make your own rice flour. Simply grind it into a fine powder using a blender or spice grinder and you’re good to go.

Potato starch is made in the same way as tapioca flour, just swap one tuber out for the other. The end result is a similar, almost flavorless starch that can be used for gluten-free baking, thickening, and frying.

In fact, potato starch is a secret weapon that can make deep-fried foods incredibly light and crisp. Plus, it won’t absorb and hold onto excess oil the same way wheat flour can.

When using potato starch to thicken a liquid, you can use it in equal amounts to tapioca flour. But for baked goods, you may need to mix potato starch with other alternative flours since it’s a bit denser.

If gluten isn’t a concern for you then wheat flour can be a great tapioca flour substitute.

When it comes to baked goods, there’s a good chance your bread or cake will actually end up with better flavor, texture, and structure. Thanks in part to the magic of gluten.

And if you’re using it as a thickener, you’ll want to be sure to cook the soup or sauce for some time in order to get rid of any raw flour taste.

So, while wheat flour can be a great substitute and even make some recipes better, remember that it behaves differently than tapioca flour.

There are a lot of great options that can fill in nicely for tapioca starch. Most of the options on this list are pure starches that act very similarly to tapioca and also have a neutral taste that won’t affect the flavor of a dish.

Wheat options like all-purpose flour can also be a good choice if you’re not worried about gluten in your food. However, unlike the other starch substitutes, wheat flour behaves differently when mixed and cooked, plus it will add more of its own flavor to the mix.

Is Cassava Flour The Same As Tapioca Flour?

Can I Use Wheat Flour Instead Of Tapioca Flour?

Wheat flour can be used instead of tapioca flour but you may need to make additional adjustments to the recipe. Wheat flour is also not gluten-free and needs to be cooked longer than tapioca flour.