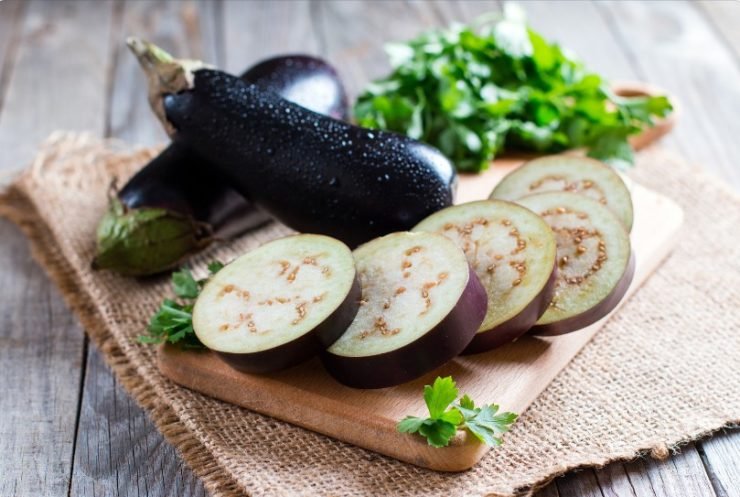 If you’ve never cut eggplant before, they can be intimidating. Do you peel them? Which way are you supposed to slice them? And why does it look like they’re sweating after you cut them?

I’ve also worked in enough kitchens on the Jersey Shore to know the simplest ways to cut and prepare eggplant, and I’ll share every tip and trick I’ve learned along the way.

But First, Should You Peel An Eggplant?

It is up to you whether you remove the eggplant’s skin before you eat it.

A young, tender eggplant will feel like a ripe tomato or peach and have very thin skin with little flavor. In this case, leave the skin intact because it adds color, and you’ll get some added nutrition.

If your eggplant is older, the skin will be tougher and have a more bitter taste. No one likes bitter eggplant, so before you get to slicing and dicing, peel the skin off older eggplants using a vegetable peeler or a sharp chef’s knife.

Eggplant rounds are perfect for grilling since they won’t fall between the grill grates. They’re also an excellent shape for eggplant parmesan or roasting.

Before cutting, thoroughly wash and dry your produce to remove dirt, pathogens, waxes, or pesticide residue.

Then, lay your eggplant horizontally on your cutting board and slice off the stem.

From here, you will create ½-inch slices across the eggplant to achieve round cuts. ½-inch slices are perfect for grilling, but feel free to adjust the size to meet your needs.

Continue along the entirety of the eggplant until you’ve completely sliced it into rounds.

Eggplant slabs can be as thick or as thin as you need for whatever you’re cooking up. Thicker slabs are great for grilling, frying into cutlets, or roasting. Thinner slabs are excellent as pasta alternatives and in rollatini or lasagna.

Again, you’ll want to begin with an eggplant that has been washed and dried.

Then, place your eggplant on a cutting board and slice off the stem tip.

Next, find the flattest side of the eggplant and nestle that against your cutting board for stability.

If your eggplant is very round, you may want to make a shallow slice along one side to create a flat plane. This way, your fruit will be more stable and won’t wobble around as you try to cut it.

Now, cut the eggplant lengthwise every ¼ – ½ inch, depending on how thick you want your slabs.

Pro-Tip: If you want paper-thin slabs of eggplant perfect for rollatini, try using a mandoline. You may have to trim the sides of the eggplant to make it fit on a smaller mandoline.

Eggplant strips can be breaded, fried, and eaten like french fries, or you could skewer and barbecue them.

To cut strips of eggplant is to go a couple of steps further than the slab cut.

Follow the instructions for cutting your eggplant into slabs, then stack a couple of slabs on top of each other.

Then, cut the stack into strips about ½-inch thick. Depending on how big your eggplant is and what you’ll be using it for, you can cut the eggplant lengthwise for longer strips or crosswise for shorter ones.

Continue to stack and cut the eggplant until you’ve worked through the entire fruit.

Diced eggplant can be added to sheet pan roasted veggies, tossed into a stir-fry, or added to soups, stews, and curries.

Remember that eggplant shrinks as it cooks, so you’ll want to create larger cubes than the end product you’re trying to achieve. I recommend ½-inch dice to end up with the perfect bite-sized morsels.

To dice your eggplant, you’ll need to go one step further than creating strips.

First, follow all steps for cutting your eggplant into strips.

Then, take the stack of strips and cut that width-wise every ½-inch to form cubes.

It’s really that simple to achieve the perfect diced eggplant!

What About The Seeds?

Whether or not you should remove the seeds from your eggplant depends primarily on the age of the fruit.

After you’ve sliced your eggplant into rounds or slabs (before cutting strips or cubes), examine the seeds.

A fresh, young eggplant will have soft, barely visible seeds that you can eat. You won’t even notice they’re there.

On the other hand, older eggplants will have larger brown seeds that can be bitter and tough. Scoop these out with a spoon and discard them.

How To Prep Eggplant Once It’s Cut

There are a couple of steps that you can take once you’ve cut your eggplant into rounds or slabs to achieve a less bitter eggplant with better texture.

Once your eggplant is cut into rounds or slabs (before moving forward with slicing into strips or cubes), lay out your eggplant in a single layer either on your cutting board or a sheet pan lined with paper towels.

Then, coat the eggplant with a heavy sprinkling of salt and let it sit for at least ½ hour or up to 1 hour.

If you want to go the extra mile, cover the top of the salted eggplant with a layer of paper towels, place a sheet pan on top, and then weigh it down with a heavy pot or some canned goods.

The salt will draw excess moisture out of the eggplant, which the paper towels will absorb. And If you add the weighted sheet pan on top, you’ll squeeze out every last bit of excess water.

You’ll be left with eggplant that isn’t the least bit bitter and a creamy inside that is just as seasoned and flavorful as the outside.

Another option to improve texture and remove bitterness is to soak your eggplant pieces for a ½ hour before cooking.

For this, make a brine with ½ tablespoon salt dissolved in ½ cup of hot water. Then, add this mixture to about 2 quarts of cool water. Next, submerge your eggplant (rounds, slabs, strips, or slices) in the brine.

After ½ hour you can remove the eggplant from the brine and use it as you usually would. Except now, there won’t be any trace of bitterness, and the eggplant will stay together no matter how you cook it.

Another option (my favorite) is to soak the eggplant in milk. Of course, you can let the eggplant soak overnight, but if you only have ½ hour, it’s still worth it.

The milk will temper the bitterness of the eggplant, and since the fruit is so spongy, it will soak up some of the milk. You’ll end up with the creamiest eggplant you’ve ever tasted, and it won’t fall apart as it cooks.

Eggplant is part of the nightshade family and should be stored similarly to other group members, like potatoes and tomatoes. Keep them in a cool, dark place out of direct sunlight.

Whole eggplant can last up to a week in the crisper drawer of your fridge for 3-4 days on the counter.

If stored at room temperature, keep it away from melons, bananas, and other ethylene producers on your countertop. These will accelerate ripening and cause your eggplant to spoil faster.

Cut eggplant can be kept in an airtight container or freezer bag in the fridge for 3 days. But, you should coat all cut edges in lemon juice to prevent browning. Even still, you may get some unsightly spots.

Cut eggplant can last up to a year in the freezer, but the texture will never be the same as when it was fresh. So only use frozen eggplant for dishes that require the eggplant to be pureed, like baba ganoush, soups, or pasta sauces.

Do you have to cut the skin off eggplant?

Removing the skin from eggplant is a personal preference. An older eggplant may have tougher, more bitter skin, whereas a young eggplant’s skin will be tender with little flavor.

Do you eat the seeds of eggplant?

A fresh eggplant will have soft, barely visible seeds that you can eat. If the eggplant has larger brown seeds, scoop them out with a spoon and discard them.

Does an eggplant have to soak before cooking?

Soaking eggplant isn’t mandatory, but if you’re someone who doesn’t love the taste of eggplant, it can help remove some bitterness. Either soak the eggplant in a salt water brine before cooking or try soaking it in milk to create a creamy, decadent texture.

Learn how to cut eggplant into rounds, slabs, strips, and cubes.

Keywords: how to prepare eggplant for cooking, how to slice eggplant