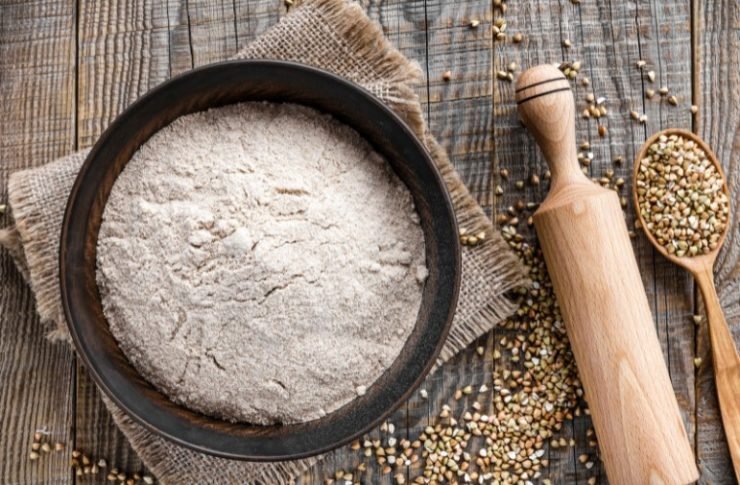 Buckwheat flour is milled from the seeds of the buckwheat plant. And while it has “wheat” in its name, it is not actually related to the wheat grain at all. It’s not even in the grass family but is actually a relative to the sorrel and rhubarb plant.

While none have the exact same taste as buckwheat, here are 8 of the best buckwheat flour substitutes that will get you by in a pinch.

What Can I Substitute For Buckwheat Flour

Oat flour is made from finely ground oats. You can find oat flour in many grocery stores, especially health food stores. But, it’s also very easy to make by simply grinding whole oats in a food processor or blender.

Oat flour is a great buckwheat flour substitute. It has a very mild flavor so it won’t alter the flavor of most recipes and it will keep things gluten-free if that’s something you’re concerned with.

In most cases, you can use oat flour in equal amounts to buckwheat flour but the texture tends to be a bit softer and spongier. That makes a great choice for muffins and cakes.

If you’re not concerned with gluten, then wheat flour is probably the best substitute around. Whole wheat flour is the easiest alternative to find in just about any grocery store. And many of you probably already have a bag sitting in your pantry.

Wheat flour also has a more mild taste than buckwheat, but it’s the ultimate baking flour. The fact that it does contain gluten makes it behave a bit differently but it will usually produce baked goods with a much better texture.

You can also use white flour but whole wheat will provide a more similar color, taste, and more nutrients.

Brown rice flour is made from finely ground brown rice. It has a slightly nutty flavor, but again, the flavor is not as pronounced as buckwheat.

Rice flour is often used for thickening sauces, but it also works well in baking applications or for making gluten-free noodles. When used for baking, brown rice flour tends to be on the dense side so it’s best to use it alongside another type of flour as well.

Make Your Own: Save a trip to the store and make your own flour by finely grinding brown rice in a food processor or blender. The same goes for quinoa and oats, a couple of other pantry staples.

Sorghum flour is another gluten-free substitute that works particularly well in baked goods. It has a slightly nutty and sweet flavor, which is somewhat similar to buckwheat.

Sorghum is great for cookies and pancakes, but it can lead to very crumbly cakes and breads. To avoid that, you may need to use additional binders like eggs or xanthan gum.

Quinoa flour is an alternative that you can find in some health food stores, but it may be just as easy to make it yourself. I would describe the flavor of quinoa flour as earthy, grassy, and not quite as sweet as buckwheat.

This is a substitute that’s often used in gluten-free baking. But, for the best results, it should usually be combined with another flour or additional binders.

Spelt flour is milled from a specific, ancient species of wheat, which means this option is not gluten-free. But, when it comes to taste alone, this might be the closest thing to buckwheat that you’ll find.

Spelt flour is closely related to plain flour, but it’s almost always milled with the outer layer of the grain intact. This is where a lot of the flavor comes from as well as its high nutritional content.

The gluten content makes this option work well in cakes and breads, but it’s obviously off-limits for those with gluten allergies.

Kamut flour is also milled from an ancient grain and is another relative of wheat. You may also see it called Khorasan or Oriental wheat.

Kamut flour has a low gluten content, but it is not gluten-free. The flavor and cooking characteristics of Kamut are very similar to Spelt flour, but you may have a slightly harder time finding this option.

Barley flour is made from milled barley, another grass family grain that is not gluten-free. Barley has a stronger flavor than many of its wheat relatives, but it’s still not quite the same as buckwheat.

The flavor is very nutty but not as sweet as buckwheat. When used in large quantities you’ll definitely be able to taste the barley in many recipes. For that reason, you may consider mixing this with another, slightly sweeter flour.

There are several good buckwheat flour substitutes that are easy to find and some that you can even make yourself.

While many alternatives will give you a similar texture in baking, the fairly strong flavor of buckwheat will be the hardest thing to replicate. So, while you won’t really have to worry about any of the substitutes taking over on the flavor front, you may find yourself missing that distinct buckwheat flavor.

Can I Substitute Whole Wheat Flour For Buckwheat Flour?

Yes, although whole wheat flour is not gluten-free, it is an excellent buckwheat flour substitute.

What Is The Difference Between Buckwheat Flour And Regular Flour?

Buckwheat flour is milled from a grain-like seed but is not actually related to wheat or regular flour at all. Buckwheat has a stronger flavor than regular flour and is widely used in gluten-free baking and noodle making.

Can I Replace Flour With Buckwheat Flour?

Buckwheat flour can be used as a flour substitute. But, because it does not contain gluten some recipes will require additional binders for the best results.