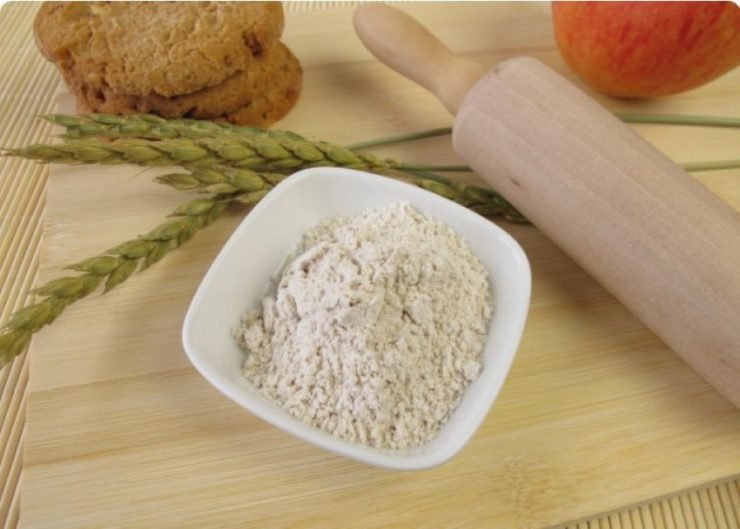 Spelt flour is one of the ancient grains and is made from a specific species of wheat.

It’s closely related to the plain or all-purpose flour that most of us are used to. But, it’s almost always milled with the outer layer of the grain intact, which adds to its sweet and nutty flavor as well as high nutritional content.

Since spelt is from the wheat family it does contain gluten, although in lower amounts than all-purpose flour. Luckily, being in the wheat family also makes it fairly easy to find good substitutes.

From a common household staple to the oldest grain known to man, here are 7 spelt flour substitutes that can get you through any recipe.

Similar to spelt, einkorn flour is an ancient grain. Even if you haven’t heard of einkorn you’ve probably heard of farro, which is the grain it is milled from.

We’ve been using the grain since as far back as the Neolithic period. That’s about 12,000 years ago! Farro is believed to be the first wheat ever cultivated for cooking, making it the most ancient of them all!

Aside from being a great conversation starter, einkorn flour is a great spelt substitute. It has a similar but slightly stronger flavor than spelt but it can be used as a substitute in just about any recipe.

Einkorn doesn’t require as much water as spelt so you’ll want to decrease the amount of liquid in your recipe by about a third. And, you may have a harder time finding it than some of the other options.

Wheat flour doesn’t have quite the same flavor as spelt, but it’s probably the easiest and most readily available substitute that you’re going to find.

You can certainly use all-purpose or any other white-wheat flour, but going with whole wheat will give you more similar results to spelt. Whole wheat goes through less processing and maintains more flavor and nutrients.

Amaranth is another ancient grain (it’s actually a seed) and makes for a great gluten-free spelt flour substitute.

Amaranth flour doesn’t have the same sweet characteristics as spelt but it does give you a similar nutty flavor.

Since this option does not have gluten as spelt does, it’s not always a great substitute in bread recipes on its own. But, it can be combined with other flours to add great flavor to the mix, and it works well in cookies, pancakes, and pie crusts.

Kamut flour is yet another ancient grain. This one is milled from Khorasan wheat or sometimes called Oriental wheat.

Kamut flour has a similar flavor to spelt that’s both nutty and sweet. It also behaves very similarly and can be used in equal amounts in most situations.

While Kamut flour has a lower gluten content than many of the other alternatives, it is by no means gluten-free. So be sure not to use this flour if you or anyone you’re cooking with has a gluten allergy.

Barley flour is made from milled barley and while it isn’t made from wheat like some of the other options, it does still contain gluten.

The flavor profile of barley is similar to spelt but not nearly as subtle. If a recipe calls for large quantities of spelt, you may consider combining barley with another one of the alternatives. That way the flavor won’t become too overpowering.

And, even though barley does contain gluten, it is a much lower percentage than spelt so it’s hard to develop the right structure for loaves of bread. But, it does work well in flatbreads or as a thickening agent in soups or sauces.

Quinoa flour is milled from quinoa seeds rather than a wheat product, which makes it another good gluten-free spelt substitute. The flavor of quinoa is not as sweet as spelt, but is more earthy and grassy.

The fairly strong flavor and lack of gluten, make this substitute best used alongside another one of the alternatives. Especially if it will be used in bread or cake recipes. If used with another wheat-based flour, you can use as much as 50% quinoa flour in the mix.

Buckwheat flour is made from milled buckwheat seeds rather than wheat grains, making this a gluten-free flour. When it comes down to taste, buckwheat might be the best gluten-free spelt alternative around.

It has a similar sweet and nutty flavor to spelt, but it does act a bit different when used for cooking and baking. Again, this comes down to the lack of gluten. Buckwheat makes delicious pancakes and muffins, but will usually need to be combined with another flour when used for bread baking applications.

There are a lot of good spelt flour alternatives and it’s fairly easy to substitute so long as you’re not concerned about gluten.

Since spelt is in the wheat family, you can fairly easily swap in another wheat-based flour to get similar baking results. Flavors and textures may change slightly, but you shouldn’t end up with a completely unrecognizable end product.

There are also a few good gluten-free options if gluten is out of the question. But, you’ll generally need to make additional alterations to your recipe in order to end up with the best results.

Can I Use Plain Flour Instead Of Spelt Flour?

Yes, plain wheat flour is one of the best spelt flour substitutes. You won’t get the same flavor but you should still get an end product with a good taste and texture.

Can I Substitute Spelt Flour In Baking?

There are a lot of good spelt flour substitutes when it comes to baking. Going with another wheat-based substitute like Einkorn or Whole Wheat will give the best results.

What Is The Difference Between Spelt Flour And Plain Flour?

Spelt flour and plain flour are related but are milled from different species of wheat. Spelt flour comes from a specific type of wheat plant while plain flour can be made from a variety of types that are often blended together.