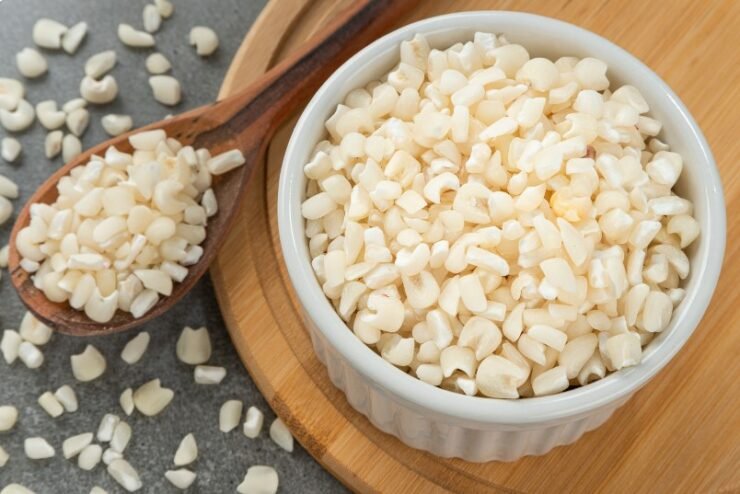 Hominy is a type of treated corn that may be tough to find in some areas. If you need it for a recipe and don’t have any at your local market, no need to worry. There are several ways to easily replace hominy.

Hominy adds a satisfying chewy texture to soups and stews like Mexican posole and Menudo. Or is sometimes finely milled, like grits. No matter which type of hominy you need to replace, this list has a suitable substitute for you.

Chickpeas are a perfect substitute for hominy in soups, stews, cold dishes, and posole. They’re roughly the same size and have a substantial texture that’s satisfying like hominy.

Aside from its similar nutty flavor, this legume also has the added benefit of holding up well in soups. For long-cooking soups, it’s best to soak chickpeas overnight and boil them with your soup the next day, cooking until they’re tender.

Canned chickpeas are an excellent option for soups and other hominy dishes that don’t cook for long. They’re a quick and easy solution for any busy chef.

Use chickpeas as a 1:1 substitute, replacing hominy in equal amounts. If you’re substituting dry hominy, use dry chickpeas. Canned chickpeas are best measured by replacing the same quantity of cooked hominy.

Since hominy is made from corn, sweet corn is an excellent replacement with a similar flavor. It can be used in soups and stews, posole, and any dish that includes whole hominy kernels.

Sweet corn provides a similar pop and chewiness to hominy. For this reason, it’s ideal in both texture and flavor as a substitute. In addition, corn is a classic flavor complement to most Mexican dishes.

Fresh or frozen corn can be used as a direct replacement for hominy.

Keep in mind that corn is sweeter than hominy and isn’t as durable in long-cooking stews and soups. Consider adding it during the last 15 minutes of cooking so it keeps a firmer texture.

Barley has some unique qualities as a grain that make it a great substitute for hominy in soups, stews, and posole.

This is a fantastic replacement for hominy because of its chewy texture and nutty taste. If you’ve ever had a good mushroom barley soup, you know what I’m talking about.

In addition, hulled barley is a rather hearty grain that holds up well in long-cooking soups. Like dried beans, it’s best to leave it out to soak in water overnight before cooking.

Expect hulled barley to take about 50 minutes to cook thoroughly. 1 cup of dried hulled barley makes about 3 cups of cooked barley, so adjust your recipe accordingly.

Brown rice is another scrumptious substitute for hominy in soups, posole, stews, and cold salads.

Like hominy, brown rice has a chewy texture and nutty flavor once cooked. Go for short-grain varieties of brown rice for the best chewiness.

Brown rice is also exceptional at replacing hominy in soups since it has a longer cooking time than white rice. Short-grain brown rice will hold its shape well if cooked for under an hour.

Pro Tip: For an even heartier texture and unique earthy flavor, try wild rice. Follow the instructions on the package for the best results when cooking.

While beans aren’t as chewy and firm as hominy, they do contribute a pleasing texture, and should go well in most recipes.

A few bean varieties that work well in hominy recipes include:

Remember to soak your beans overnight before cooking so they’ll cook faster.

Pro Tip: To help beans keep their shape when cooking, simmer them on medium heat once they come to a full boil and wait to add salt until they’re done. Then, remove from the heat and let beans soak in the salty water for at least 5 minutes before draining.

Samp is a type of corn that’s been cracked into pieces. Smaller than whole corn kernels but larger than polenta or coarse cornmeal. This is your best bet for recipes that call for cracked white hominy.

Samp may not be a household name everywhere, but it’s common in South Africa, Zambia, and New England. It can be boiled until tender in water or milk, and like all corn, it goes wonderfully with butter on top.

In Africa, it’s typically served with beans, and may be boiled with a spoonful of peanut butter for extra flavor!

Instructions for cooking samp vary wildly, which may be due to the different sizes of samp pieces. For best results, soak overnight and then cook in fresh water until it’s tender, anywhere from 20 minutes to over an hour.

Polenta and grits are other forms of ground corn that are good for porridges and thickening soups in place of hominy grits.

You won’t want to use polenta or grits in your posole unless you want posole porridge!

Polenta and grits are made from two different kinds of corn, so they’re not identical. Yellow corn is used to make polenta; it’s coarser and takes longer to cook. Grits are made from white hominy corn and usually cook quickly, in under 10 minutes.

Either can be used to thicken soups or to eat as a porridge. Polenta has the bonus of being solid and sliceable once it’s been cooked and chilled. It’s delightful fried in a little oil with salt.

Hominy is an easy ingredient to replace, but a few factors are helpful to look over when choosing a substitute.

How is the flavor of your substitute compared to hominy? The best matches for taste will be the options made from corn. But if you’re willing to switch things up a bit, you can still get great flavor from beans and grains.

Second, consider the texture of the ingredient you’d like to use. Is it firm like hominy? Or is it softer? Does it have a similar chewiness, or is it more creamy like kidney beans? Is it similar in size to hominy or far different?

Finally, the cooking time of your substitute is also important. For instance, if you want to make a long-cooking stew, you’ll need a hominy replacement that can hold its shape and flavor like dry beans. Whereas quick-cooking substitutes should be added near the end of cooking.

While no ingredient can mimic hominy perfectly in traditional posole, many ingredients in this list will get you close to it and potentially save your recipe.

Is hominy the same as regular corn?

Hominy is processed differently than sweet corn. It’s soaked in a lime solution to remove the hull and germ, which causes it to double in size.

What’s the best substitute for hominy in posole?

Chickpeas or sweet corn are the best options for texture, taste, and appearance to replace hominy in posole.

Can polenta be substituted for hominy?

Polenta should only be substituted for hominy grits, not whole hominy kernels.