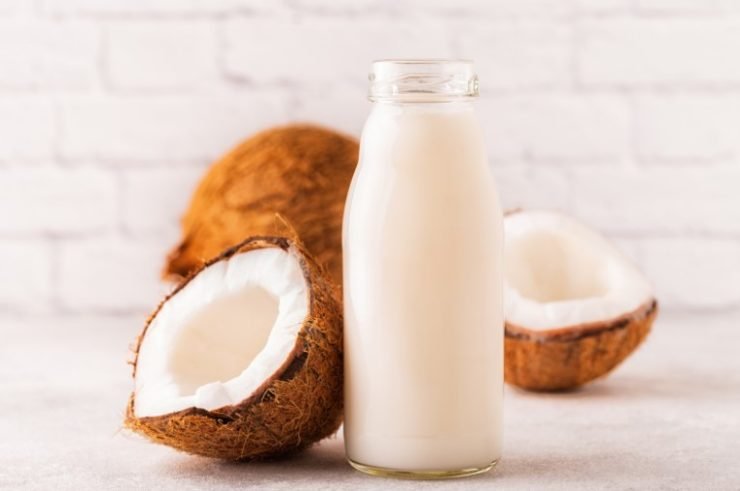 If you’ve run out of coconut milk for a recipe, there are several simple ways to substitute.

In this article, I’ll share 10 of the most used substitutes in my personal kitchen and from my career as a professional chef and baker.

Before we dive into specific coconut milk alternatives, keep in mind that the best substitute for your situation will depend on your dietary preferences and the characteristics of the dish you’re making.

There is no “one size fits all” solution.

9 Substitutes for Coconut Milk, With and Without Dairy

Coconut cream is an excellent substitute for curries and soups.

A major advantage of this option is that it will give you exceptional control over the thickness of your recipe. You can add just enough water to get the consistency that you want, and still keep all the flavor.

I also love using it as the primary base for vegan ice creams. It stays rich and creamy once frozen since it has less water in it than coconut milk.

To use this substitute, mix 1 part coconut cream with 2 parts water to make coconut milk. Or you can wing it and add water until you reach the consistency you want.

Heavy cream is a suitable stand-in for coconut milk in soups and stews.

Also try cooking greens, such as kale or collards, with heavy cream for a rich and creamy side dish.

The major advantage of this substitute is that it will provide a creamy flavor and texture. Since heavy cream is high in fat, it won’t curdle in soups and curries like regular milk.

Use heavy cream at a 1:1 ratio to coconut milk. If you’d prefer a non-dairy option, then read on.

Try using cashew milk in any recipe with coconut milk that you want to keep plant-based.

Thanks to cashew’s high fat content, it makes a rich non-dairy substitute for coconut milk.

Use your cashew milk at a 1:1 ratio for coconut milk, though you may want to start with less due to the higher water content.

If you can’t find it in the store, you might have to make it yourself. This means you’ll need at least 24 hours to make it, since the cashews need to be soaked overnight.

Start by soaking 1 cup of cashews in water overnight at room temperature. In the morning, drain off the soaking water and rinse the cashews.

Then blend the cashews in a blender with 2 cups of water. Once it’s blended, you’ll strain the mixture in a nut-milk bag inside a colander. This type of bag is basically a superfine cheesecloth.

Squeeze and massage the bag to get as much of the “milk” out as possible. This can take some muscle when you get toward the end.

Once you have your cashew milk, hang on to the pulp. It can be used to make crackers, granola, or even a vegan ricotta spread.

Consider saving some cashew milk to sip on, too. Add a little vanilla and maple syrup, and you’ll be in heaven! You can add it to your morning coffee or smoothie like coconut milk, too.

Try Greek Yogurt in soups, smoothies, or pasta sauces. It also works well for pastries and quick breads like muffins or banana bread.

Greek yogurt has a thickness and richness that rivals coconut milk. Plus, it has the added nutritional benefit of being higher in protein.

Use at a 1:1 ratio in place of coconut milk. Occasionally, you may need to add a bit of water due to Greek yogurt’s thickness.

You’ll want to use a plain, unsweetened version of Greek yogurt to substitute coconut milk. Make sure you’re using it as a substitution in a recipe where its tangy flavor will be a good match.

This is an ideal plant-based substitute for beverages, baked goods, and pasta sauces. For years it was my go-to for vegan baking. It froths quite well for coffee drinks, too.

Soy milk is thinner than coconut milk, but it’s high in protein and it cooks without curdling. It’s made from blanched soybeans that have been blended with water and then strained. It’s usually fortified with extra vitamins and calcium.

Use it as a 1:1 substitute in beverages and baked goods. For other types of recipes, you may want to use less due to its thin consistency.

Try the Edensoy brand for a richer, thicker soymilk that’s a superior substitute for coconut milk.

Almond milk is a good non-dairy stand-in for some baking recipes.

Try it as a 1:1 substitute in recipes for quick breads and muffins.

It’s also suitable for beverages that call for coconut milk. However, you will lose that coconut flavor.

Note: I’ll add a few tips at the end of this article for how to add coconut flavor back in.

Oat Milk a perfect swap for coconut milk in baked goods and beverages. I wouldn’t recommend it for savory dishes, except for curries, due to its sweetness.

Oat milk has a natural sweetness, so make sure you buy an unsweetened version.

If you can find the “extra creamy” styles of oat milk, those will be the best substitutes for coconut milk. They usually have extra oil emulsified into them to make them thicker and creamier.

Use at a 1:1 ratio in place of coconut milk. If it’s too thin, then try using less or reducing the oat milk on the stove before using.

Silken tofu adds a thick, coconut-milk consistency to smoothies, beverages, and desserts. It also adds substance to sauces and soups.

It’s an ingredient I utilized often as a vegan pastry chef.

To use it, blend silken tofu with equal parts of soymilk or water. Replace it at a 1:1 ratio for coconut milk.

Use evaporated milk as a quick substitution in curries, soups, and pasta sauces at a 1:1 ratio. It can also work in baked goods.

This canned substitute is made from real milk that’s had roughly 60 percent of the water reduced from it. It’s a simple and easy replacement for coconut milk.

Evaporated milk usually comes in cans, and can come in skim or whole milk varieties. You’ll want to stick to the full-fat variety when substituting coconut milk.

Don’t confuse this with sweetened condensed milk, which is far too sweet to use for coconut milk.

Or Make Your Own Coconut Milk

You can also use dried coconut to make your own coconut milk!

This option takes a little extra effort, but it is an incredibly effective solution for any recipe that calls for coconut milk. And it might save you a trip to the store.

With this substitute, you’ll be able to keep that coconutty flavor in your recipe. Look for pure, desiccated coconut that doesn’t have preservatives or sweeteners added.

Here’s how to do it,

In a high-speed blender, combine 1 cup of desiccated coconut with 2 cups of water. Blend it until it looks smooth, about 1 minute.

Then strain the mixture through a nut milk bag placed in a colander. The straining isn’t required, but it is helpful if you don’t want bits of dry coconut in your dish.

When you’re choosing a substitution for coconut milk, there are a few factors to consider.

First, look at how thick you need your liquid to be for the kind of dish you’re making. Different substitutions may require adding water or reducing the liquid to get the right viscosity.

Consider whether you want dairy in your dish, and that will narrow down your choices. Again, the thickness you need will be important here.

All the dairy-based options presented here are thick, with Greek yogurt being the thickest. Almond milk and soymilk are more watery non-dairy substitutes, and silken tofu can be the thickest.

How to Add Coconut Flavor Back to Your Dish

You could also top your dish with shredded coconut as a garnish. Toast it in a low-heat (250F) oven until just-golden, about 3-5 minutes.

Finally, if you want to boost the coconut flavor in your pastries or buttercreams, consider adding a touch of coconut extract. Since it’s so strong, start with ¼ teaspoon and then adjust to taste.

What can I substitute coconut milk with in curry?

To substitute coconut milk in curry, a dairy-based option is heavy cream. To replace it with non-dairy, try cashew milk.

Can I use heavy cream to substitute coconut milk in a recipe?

Yes, you can use heavy cream in place of coconut milk, as long as you don’t mind the dairy. Try adding in a little coconut oil to replace the coconut flavor.

How do I use coconut cream to make coconut milk?