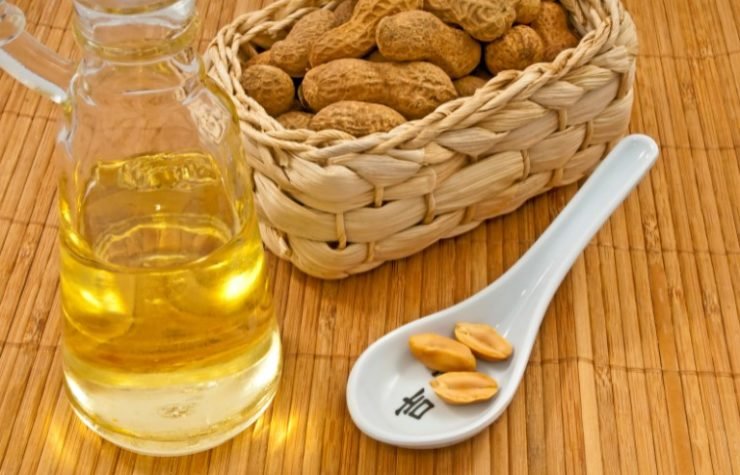 As you may have guessed, peanut oil is made by pressing peanuts. You can find peanut oil made from raw or lightly roasted peanuts. And while the roasted version will have a stronger flavor and aroma, both have a delicious nutty taste.

With a high smoke point of 450 F, peanut oil is often used as an oil for deep frying. It’s also widely used as an all-purpose oil in China, which also happens to be the largest producer and consumer of the stuff.

If you come across a recipe that calls for peanut oil and you can’t find it or can’t use it due to a peanut allergy, you’re in luck. Here are 7 peanut oil substitutes that will get you through any recipe.

Canola oil which is pressed from rapeseeds, is an excellent and easy-to-find peanut oil substitute.

It has a very neutral flavor which makes it a good choice for dressings or baking applications. And while it doesn’t match peanut oil’s 450 F smoke point it can still be used for high heat cooking up to around 400 F.

Not only is canola oil easy to find at just about any store, but it’s also less expensive than peanut oil as well as most of the other alternative options.

Grapeseed oil is a great substitute and perhaps my favorite all-purpose oil there is. It’s largely a byproduct of the wine industry, as it is pressed from the small seeds of grapes.

Grapeseed oil is one of the most flavorless and “clean” tasting oils around. That makes it great for just about any cooking application, but you won’t get the roasty, nutty flavor that you’ll often find in peanut oil.

This is a great option for cold salad dressings and homemade mayo, and its 420 F smoke point makes it an excellent cooking oil.

Rice bran oil is pressed from the outer layer of brown rice. It’s less common in home kitchens, but is widely used in professional ones for its high smoke point (490F), neutral flavor, and relatively low cost.

This is another excellent multitasking oil that can be used for any type of cooking, or raw application. Again, you’re not going to get the same subtle nuttiness as peanut oil, but it’s a perfect substitute in every other way.

If you’re looking for a peanut oil substitute for deep frying this is the oil for you.

Shop Like A Pro: If you can’t find it or it’s too expensive at your local grocery store, visit a restaurant supply store where you can often get it for a fraction of the price.

Corn oil is a good peanut oil substitute because it’s versatile and easy to find. Plus, it’s incredibly inexpensive.

You can use corn oil for anything you would use peanut oil for, and while it’s very subtle, it even has a slightly sweet nuttiness to it. With the same smoke point as peanut oil (450), this option has a lot of similarities but at a much lower price.

While the flavor is definitely different from peanut oil, almond oil does offer a pleasant nutty flavor and aroma.

This is a great choice for baking, and can be a very nice finishing oil over salads, fruits, and vegetables.

When it comes to high heat cooking, almond oil has a tendency to turn bitter. That is unless you find a highly refined version that is able to handle temperatures up to around 400 F.

Safflower oil is pressed from a plant in the sunflower family. It’s another great all-purpose oil, and it has a very high smoke point of 510 F.

This option has almost no flavor at all and works well raw, cooked, or baked without affecting the flavor of your recipe.

But again, high heat cooking is where this oil really shines. It’s the perfect choice for stir-fries or searing meat.

While many oils are pressed from a seed or grain, avocado oil is actually made from the pulp of the fruit. That’s one of the reasons that this option comes with a slightly stronger flavor.

The taste is somewhat grassy, and more in line with olive oil than peanut oil. But, the taste isn’t too strong and it seems to go well with just about anything.

Avocado oil has one of the highest smoke points around at a blistering 520 F. That makes it perfect for sauteing and searing, while its rich flavor makes it perfect as a finishing oil as well.

The price can be on the high side, but it’s one of the most versatile options around.

If you’re simply looking to match the cooking characteristics of peanut oil, there are a lot of good options that will fit the bill nicely.

When it comes to replicating the subtle roasty, toasty, nutty flavor and aroma of peanut oil, there’s nothing quite like it.

Luckily, it is a fairly subtle flavor. And when used for high heat applications a good bit of that flavor is lost anyway.

If a recipe calls for peanut oil and you don’t have it, can’t find it, or just don’t want to spend the money on it, you can use a substitute and most people probably won’t know the difference.

And if you think it makes sense for the dish, throw some chopped peanuts on at the end to really cover your tracks.

Can I Substitute Vegetable Oil For Peanut Oil?

Yes, vegetable oil is a neutral-flavored oil that can be used in place of peanut oil without changing the flavor of a recipe. It also has a similar smoke point between 400 and 450 F.

Avocado oil is a good peanut oil substitute with an incredibly high smoke point of 520 F. Avocado oil has a subtle yet different flavor than peanut oil, but it won’t have a major effect in most recipes.

Can I Substitute Corn Oil For Peanut Oil?

Corn oil is a great substitute for peanut oil. It has the same smoke point, a neutral flavor, and it’s very easy to find in most grocery stores.