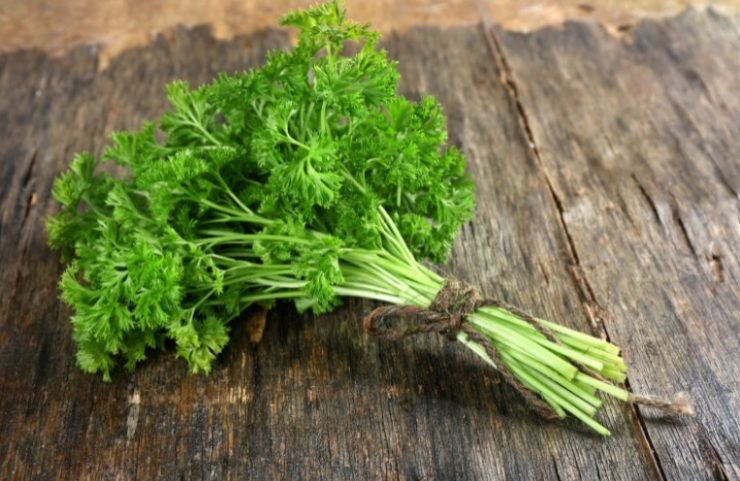 As a professional cook I probably shouldn’t admit this, but I too have purchased cilantro when I meant to buy parsley. And parsley is an ingredient that doesn’t always get the appreciation it deserves, until you don’t have any when you need it.

In home and professional kitchens, parsley is a foundational flavor in a countless number of stocks, soups, and sauces. Not to mention its ability to change a dish’s appearance by adding a pop of color.

I find that flat leaf parsley has the best flavor and texture, so that’s what I use for just about everything. But the curly variety can also be used interchangeably.

While nothing tastes exactly like parsley, you certainly don’t have to stop mid recipe if you realize you don’t have any on hand. Instead, use a bit of ingredient knowledge to find a suitable substitute that you may have hidden in your fridge, pantry, or garden.

Celery leaves are a great parsley substitute if you’re looking to add a little color to a dish. Especially as a garnish or in cold dishes like salads or dressings, since they’ll wilt and shrink to nothing when cooked.

As you may suspect, celery leaves taste like celery, but even more mild. That’s why they are a great way to add color without having a big effect on how a recipe tastes.

This is one of the ultimate “in-a-pinch” substitutes since celery is a common staple in most fridges. And, more often than not, the leaves just get trimmed off and tossed in the trash or compost.

Chervil is an herb often used in classical French cuisine, but probably isn’t something most people keep stocked in their kitchens.

The leaves look like small, delicate parsley leaves. Some people even call it French Parsley. So, if you accidentally picked this up at the grocery store, there’s no need to panic. Chervil is a great parsley substitute.

It has a more subtle flavor with notes of anise, but it goes well in most situations where you would normally use parsley.

Basil is another good choice because it’s easy to find and one of the more common herbs to have on hand.

Basil works well in raw or cooked applications, but it does have a stronger flavor that’s quite different than parsley. If you’re cooking Italian food, this is the substitute I would reach for. Just be sure to use a bit less since it has a more pronounced taste.

Arugula is nice and peppery but doesn’t have any overpowering flavors that will completely change a dish.

While you can use arugula raw or cooked, it’s good to know that it’s quick to wilt when used with acids like vinegar or citrus. But, the fairly neutral flavor makes it an easy substitute in most cuisines.

Chives are one of my favorite raw garnishes. They look good and add a subtle onion flavor. While the taste isn’t really similar to parsley, it’s pretty universal in the dishes that it goes well with.

The delicate flavor of chives shines when they’re raw, but it can also be used in cooking applications. Especially when it comes to egg dishes or baked goods.

Just like celery leaves, carrot tops are usually a throw-away item. But, in a pinch they can definitely be used as a parsley stand in.

The flavor is slightly carroty but also on the bitter side. The bitterness tends to get stronger and the leaves tougher as they get bigger. So stick to the younger, smaller leaves and chop them finely before using.

Tarragon is another herb that’s often used in French cuisine. It has a fairly pronounced licorice flavor, and is a bit more intense than parsley.

Used in moderation and chopped finely, tarragon can be a great last minute garnish. But, use sparingly when cooking so you don’t overpower your recipe.

While dried oregano is pretty common, it’s the fresh herb that makes the best parsley substitute. Fresh or dried, oregano has a more pronounced peppery and slightly bitter flavor than parsley.

It goes well in Italian and Mexican cuisine, but should be used in smaller quantities due to the assertive flavor.

Cilantro is probably the number one herb that gets confused with parsley at the store. And I have a sneaking suspicion that grocery store owners are playing a cruel joke by always selling the two side by side.

While cilantro looks similar to flat leaf parsley, it has a vastly different flavor. For that reason, you should be careful and sparing when using it as a substitute.

If it’s Latin, Asian, or Indian cuisine that you’re dealing with this could be a good stand in. But, for most others, you may want to leave it out.

Consider This Before Picking An Alternative

Even though parsley has a unique flavor, there are a lot of good substitutes that can come to the recipe rescue in a pinch. I would also recommend keeping some dried parsley on hand, for any recipes where only the real thing will do.

To really take your cooking to the next level, check out our article on flavor principles. You’ll be able to ditch the recipes and become an ingredient substitution expert in no time.