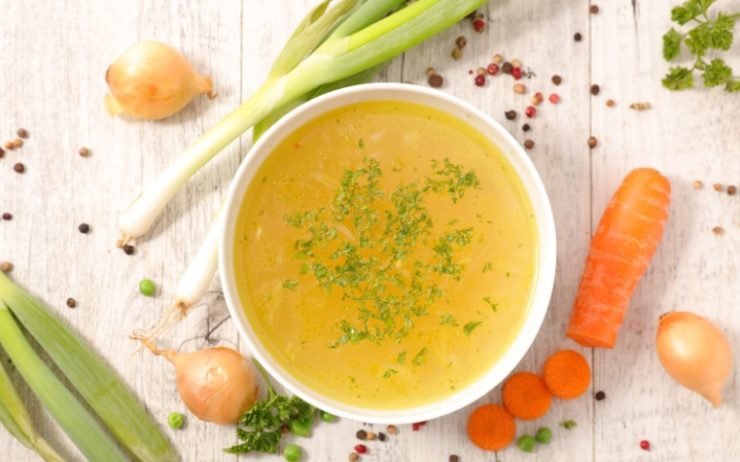 Using veggie broth instead of water is a way to add, let’s call it “bonus” flavor to a recipe. It’s almost never 100% required, but the end result will probably taste at least a little bit better.

If you run out or realize you don’t have any veggie broth mid-recipe, you can always use water and the recipe should turn out just fine. But when you don’t want to miss out on any extra flavor, try one of these 9 veggie broth substitutes that I’ve picked up through years working in professional kitchens.

Mushroom broth is one of the best and easiest veggie broth substitutes to use and make. You can make it with only one ingredient (and water) but it packs tons of flavor. Plus, you get more umami and meatiness than you do from veggie broth while keeping it vegetarian.

You can make mushroom broth using fresh mushrooms but I think dried ones are generally the best way to go.

Dried mushrooms come packed with incredibly concentrated mushroom flavor. So while they may seem expensive when buying them, you don’t need much to make a lot of really flavorful broth.

To make, simply steep your dried mushrooms of choice in boiling water as you would tea. The mushrooms will rehydrate and release all of their flavors into the water, which you can use just like you would veggie broth.

As for the mushrooms themselves, some don’t appreciate the soft and chewy texture, but I love them chopped up and added to soups and stir-fries.

Pro Tip: Next time you use fresh mushrooms in a meal, save the stems and scraps to make a bonus and basically free batch of mushroom broth.

Bouillon concentrate (sometimes called “base”) is basically just dehydrated broth or stock. You can get it in a wide range of flavors and also different shelf-stable forms. I tend to prefer individually wrapped cubes because they’re pre-portioned and take up almost no space to store.

To use bouillon concentrate, you simply dissolve the powder or paste into boiling water and the broth is ready to go. Even if you don’t plan on using it regularly, this can be a handy item to keep in the back of your cupboard, just in case.

The main thing to be careful of when using bouillon is that many options contain high levels of sodium and MSG. So be sure to taste before adding any additional seasoning to your recipe.

This is another single ingredient substitute that couldn’t be easier to make. Making a simple broth with fresh or canned tomatoes and water is a great way to make up for the flavor of veggie broth.

Similar to mushrooms and parmesan cheese, tomatoes are loaded with naturally occurring glutamic acid. That’s the amino acid responsible for the umami flavor. And it adds savory meatiness to dishes, without the meat.

All you need to do is simmer diced or crushed tomatoes in water for at least 20 minutes. Then, use that liquid as is, or strain it if you want a thinner, more clear broth.

The flavor profile of dashi definitely leans towards seafood dishes. However, its complex umami flavor also works wonderfully with all kinds of vegetables, chicken, and pork.

If you want to make your own, you’ll probably need to visit your local Asian market to get the requisite 2 ingredients. Or, you can go the less authentic but still delicious instant powder route.

Even when a recipe calls for veggie or another type of broth, there’s good chance water would work just as well. You may miss out on some subtle depth of flavor in the dish, but I wouldn’t usually stop cooking and head to the store just for that.

I can’t tell you how many times I’ve ignored a recipe’s call for veggie broth, and I promise, nobody has ever been the wiser.

This is especially true if it’s a dish that will be cooked for a long period, with its own aromatics and other meat or veg. Because when that’s the case, you’re essentially making your own flavorful broth as you go.

If nobody you’re cooking for is a vegetarian, this should probably be your number one choice. Because, if you ask me, chicken broth is like veggie broth on steroids (in a good way).

In most cases, chicken broth will have all the same vegetables you would find in veggie broth, plus chicken. And that one extra ingredient adds rich, umami, savoriness that’s more noticeable in a lot of recipes.

So as far as taste goes, this is likely your best bet. And it should work universally well in any recipe that originally called for veggie broth.

Beef broth is probably the richest substitute on the list. It will also often have a fairly assertive flavor compared to veggie broth and most other alternatives.

Use beef broth if you want a dark and meaty soup, sauce, or braise. Just be aware that the flavor of beef broth can really shine through and may end up overpowering other delicate flavors in a dish.

If you’re stressed out about not having any veggie broth on hand, just pour yourself a big glass of wine and you’ll forget all about it…

Ok, maybe that’s not a great solution. But in all seriousness, wine can be a great and easy way to add extra flavor and complexity to a recipe.

Instead of using wine as a direct liquid substitute, use it to deglaze your pot or pan. Then, allow it to reduce for several minutes before adding water or another broth alternative. Cooking out the wine this way will concentrate the flavor and mellow out the harsh alcohol taste.

While this isn’t technically a substitute, there’s a good chance you can cobble together your own veggie broth. All using spare ingredients you may already have lying around your kitchen.

Sure, you can find countless vegetable broth recipes scattered across the web. But don’t get trapped into thinking you have to use a specific list of ingredients to make a flavorful broth.

There are a ton of herbs and vegetables that work well. But there are some you should avoid, and those live primarily in the brassica or cruciferous vegetable family. That includes things like cabbage, broccoli, cauliflower, and leafy greens that contain high levels of sulfur compounds.

So, fill a pot with water and take a little scavenger hunt through your kitchen and pantry. Only have onions? Make an onion broth. And maybe throw in a few dry herbs for good measure. Whatever you find, simmer it gently for about an hour, then strain and you’re good to go.

The main purpose of using veggie broth in a recipe is to add more depth of flavor. And as you can see, there are a lot of different ways to do that that don’t rely on veggie broth specifically.

When working with substitutes, think about the other flavors in your dish. If the other ingredients are delicate and you don’t want to overpower them, use a delicate substitute like dashi, or tomato broth.

On the other hand, if the dish is really hearty and has its own strong flavors, you can probably get away with using something a little more assertive like beef, or mushroom broth. Or, maybe the recipe has enough flavor as is and plain old water will work just fine.

What’s The Difference Between Veggie Broth And Veggie Stock?

Can I Use Water Instead Of Veggie Broth?

Yes, water is a great substitute for veggie broth. You may lose a small amount of extra flavor in the end dish, so it can be helpful to add additional herbs and seasoning to the recipe.

Most commonly, veggie broth will be made with onion, carrot, and celery as the primary ingredients, along with various herbs and spices. However, veggie broth can be made from any combination of vegetables and herbs.