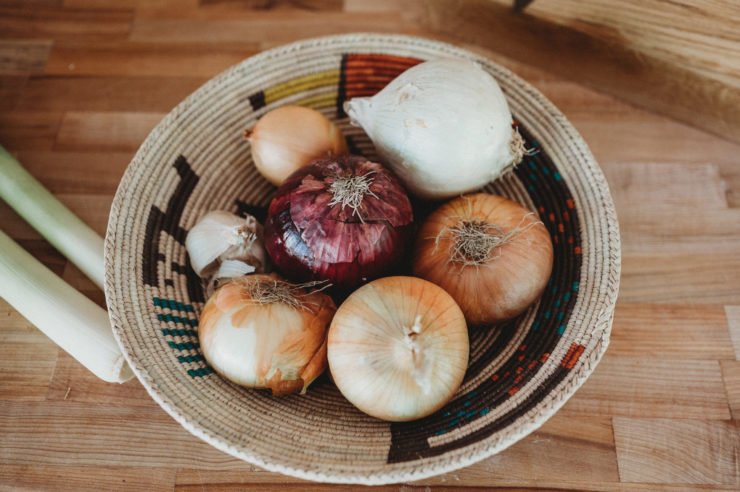 Onions are used in just about every cuisine around the globe. They can play a role in the background of a dish or front and center as the star.

While most people are familiar with red, yellow, white, and green onions, there are actually dozens of varieties. Each with its own set of flavors and uses.

Working in professional kitchens has given me the chance to explore all manner of onions and alliums (the onion and garlic family).

This isn’t an exhaustive list of every onion on the market. Instead, it covers the types of onions that you can easily (in most cases) get your hands on to help take your cooking to the next level.

Cippolini onions (chip-o-leany or chip-o’s in the biz) are small and flat, and are one of the sweetest onions around.

The high sugar content makes them a great candidate for caramelization. After they’re peeled you can simply roast them whole in a hot oven until they’re soft and golden. Or, you can try braised cippos, which is a little more work but well worth the effort.

First caramelize the onions in a pan with butter and thyme, then cover halfway with good stock and simmer until most of the liquid is gone. You’ll be left with a rich, savory, sweet “sauce” that’s perfect with roasted meat, fish, or root vegetables.

These onions tend to be a bit more expensive than the larger varieties, so use them wisely and allow them to shine in the dish.

Pearl onions are the smallest onion that you’re likely to come across. They look almost identical to a standard white, yellow, or red onion except that they’re about the size of a marble. The taste is also similar except they are a bit more mild than the full-sized versions.

The small size and mild flavor makes them a good choice for pickling. But they’re also a classic ingredient in stews and braises like beef bourguignon.

These bite-sized onions are almost always used whole and the peeling process can be a bit tedious and time-consuming. Alternatively, you can buy them pre-peeled and frozen, but the flavor and texture is not as good as fresh.

Shallots are a chef’s favorite and one of the best multitasking onions in the kitchen. They have a delicious and mild onion flavor, balanced with notes of garlic.

They can bring some of that onion bite to dishes but are still great when used raw. Shallots are a good option for salad dressings, or thinly sliced on sandwiches and burgers.

The balanced and somewhat sweet flavor of shallots makes them perfect as the base to soups and sauces. And they are one of my favorite options for pickling. They’re also good enough to roast whole with a little butter and thyme.

White onions have a clean and tangy flavor, with very little sweetness. The lack of sugar and high water content makes this a bad choice for caramelization, plus they tend to get mushy when cooked for long periods.

While they aren’t very sweet, white onions are still a good onion for raw applications. The tanginess works as an ingredient that can cut through and balance dishes with a lot of fat. That makes them a good choice as a topping for burgers, hot dogs, or tacos. A lot of people consider white onions to be the best onion for grilling, as well.

If the flavor is still on the strong side for you, try soaking them in ice water for an hour before using them. That will increase their crunch and make the flavor much milder.

The yellow or Spanish onion might be the most common and widely used variety around the world. It’s a workhorse in the kitchen and has the benefit of a very long shelf life when stored properly (cool, dry, dark).

Yellow onions are almost always cooked, because they have one of the most assertive and “hot” flavors when eaten raw.

This is the onion you would generally turn to for stock, mirepoix, or the sofrito used in many Latin dishes. While it doesn’t have a very sweet flavor when eaten raw, it still has enough sugar to be one of the best options for caramelizing.

Red onions are sweeter and milder than the yellow and white varieties, but they can still pack a punch.

They are very often used raw in salads or as a sandwich topper to add both flavor and color. But, they are also a good choice when it comes to sauteing, grilling, and pickling.

This is another onion that can benefit from an ice water bath if the flavor is a bit too pungent.

Sweet onions have higher sugar and lower sulfur content than your standard yellow, white, and red varieties. That tones down the heat and tears and makes them ideal for raw or lightly cooked applications. Think salads, toppings, salsas, or quick stir-fries.

There are many different varieties of sweet onion, usually named after where they are grown. A few of the most common names that you’ll see in the store are Vidalia from Georgia, Maui from Hawaii, and Walla Walla from Washington.

Since sweet onions can’t be stored as long as the reds, whites, and yellows, they are much more seasonal and won’t always be available year-round.

Spring onions are simply young, immature yellow, red, and white onions. They are picked while the onion bulb is still quite small and the tall green shoots are tender.

Spring onions have a wonderful onion flavor, but they haven’t developed the sharpness that comes when they are full grown. It’s almost like a much bigger version of a scallion.

One of my favorite ways to use spring onions is charred whole on the grill as a simple accompaniment to grilled meat or fish.

Since spring onions are only available early in the growing season, they’re generally only around for a few weeks in the spring. And, they tend to be much more expensive than when they are full grown.

Another versatile ingredient that’s used around the world and is just as good raw as it is cooked. Scallions don’t have a bulb, instead, they do have a white portion towards the root which gradually turns green as you move up the stem.

The whole thing is delicious, but the white portion tends to have a stronger and sharper flavor. In Chinese cuisine, it’s common to cook the more intense white portion and use the milder green tops as a raw garnish.

Scallions are also great in salsa, salads, charred on the grill, or used to infuse oils.

You may think of chives as being more herb than onion, but they’re in the same family (allium) and provide a delicious and delicate onion flavor.

When they mature, chives have beautiful purple blossoms. These can also be used for a similar, delicate onion flavor and an attractive pop of color.

Chives don’t have a bulb that you eat like many onions. Instead, you eat the thin tubular shoots. Chives are almost always used raw as a flavorful garnish. They’re also a delicious addition to salad dressings or mixed into things like potato, egg, or tuna salad.

Chives are easy to find in most grocery stores, but they’re expensive for the small amount that you get. If you can, this is a great choice to grow in a window or in the garden.

Leeks are a favorite of many professional chefs. This is another onion relative in the allium family that has a thick shoot but no bulb.

Leeks provide delicious onion flavor without the sharpness or bite that you get from your typical yellow, white, and red onions.

This is a great option for soups, stews, and braises. Or, they can be sliced very thin and fried for a crunchy, oniony garnish.

Leeks can be somewhat labor-intensive to grow, which makes them one of the more expensive options. They’re also notorious for getting dirt trapped inside as they grow. Because of that, they should be thoroughly washed AFTER they are cut.

Nira is another choice where the greens are used instead of a bulb. This isn’t something you’ll typically see in your neighborhood grocery store. But, they are easy to find (and inexpensive) at most Asian markets.

You’ll get a stronger garlic flavor than most onion varieties, although it’s mellow enough that they can still be used raw. Nira is a delicious addition to Asian stir-fries, and can be used as a unique substitute for scallions in most cases.

Ramps, also called wild leeks or wild onions, have a very small white bulb and a purple neck that leads to thin, broad, green leaves. The flavor is half onion half garlic, with a slightly musty quality (in a good way).

Ramps are excellent any way you use them, but you should keep the preparation simple to let their flavor shine through. Try them grilled, sauteed, in an omelette, or stuffed in a whole fish. They can also be eaten raw, and the white and purple bottoms make great pickles.

Ramps are only found in the wild for a very short period in the early spring, and it’s common for restaurants to get first dibs. While these are easily the most expensive onion that you’re going to come across, they may also be the most delicious.

With So Many Onions, Where Do You Begin?

Onions are an irreplaceable ingredient in the kitchen. So, getting to know the differences, similarities, and how to use each one can be an incredible tool in becoming a better cook.

To learn more about key ingredients, techniques, and concepts to cook like a pro, check out all we have to offer in our new Cooking School.