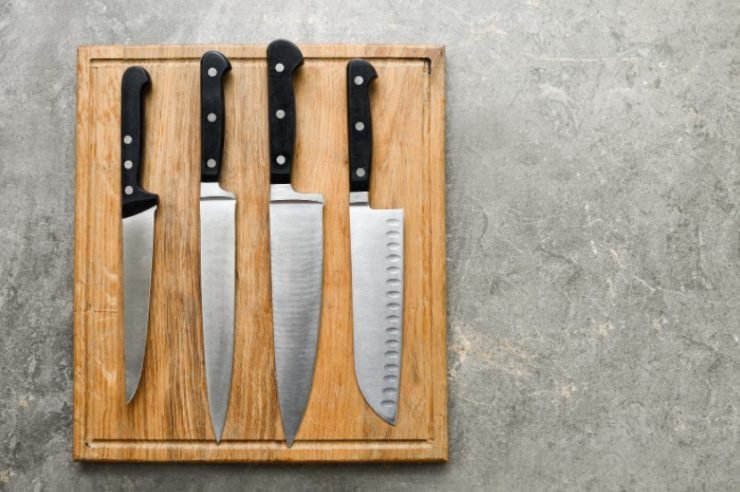 Every knife needs a sharp blade. But did you know that the type of edge a blade has determines just how sharp it can be?

Getting a good understanding of the types of knife edges used for kitchen knives is a first step towards being able to sharpen your own knives. I’ve been working with and sharpening my own knives for over a decade, and I’m happy to share that experience with you in this guide.

I’ll cover why you should care about your knife’s edge, the types of edges available to you, and how to choose which edge is the best for each of your knives. By the time you’re finished reading, you should have a clear picture of what makes one edge different from another — and what to do with that knowledge.

Why Does A Knife’s Edge Matter?

A knife’s edge type, also known as its grind, plays a huge part in what jobs the knife will be best at. It’s also where you’ll find big variations between affordable and expensive blades.

Most often, high-end knives have a specialized edge grind. This allows them to be much sharper than your standard grinds. Contrast this with more affordable knives, which often use a standard 15 or 20 degree “V” grind.

To bring that all back around: A knife’s edge will determine whether it’s an all-purpose knife or meant for more specialized cuts. The next section explores this idea more fully.

The type of grind that a blade has been given determines its edge. For example, A V grind produces a knife with a V-shaped edge.

With that definition out of the way, let’s take a closer look at each type of grind and its corresponding edge:

V grinds produce an edge that’s equally tapered on both sides of the blade. It’s the most common type of knife-edge and is especially popular for chef’s knives. As an all-purpose grind for general kitchen use, it’s hard to beat.

The chisel grind once produced the favored edge for Japanese chef’s knives. Though it’s gone out of fashion now, sushi chefs still prefer it for its razor-sharp potential.

As the name implies, a chisel grind is sharpened only on one side of the blade. This means that its effective blade surface is very small — and very good for making precise cuts. The downside is that the blade requires more frequent resharpening, and cannot be used on both sides of the knife.

Imagine the V shape from our first edge, and then bow in the arms of the V — that’s the hollow grind. Popular amongst hunters and fishermen, it’s excellent for skinning or scaling. But it’s a tricky edge to sharpen, and requires frequent resharpening.

Instead of having the arms of the V curve inward as in the hollow grind, a convex grind bows them outward. This is the sort of edge favored for axes and some cleavers, as it excels at chopping. It’s not the sharpest edge available, but it’s exceptionally durable.

If you imagine placing two V grinds one on top of the other, you’re close to a compound grind. Also known as a “double bevel grind”, it’s one of the most complex edges to sharpen. Because of that, it’s relatively uncommon — though it does have a good blend of sharpness and durability.

Combine one-half of any of the above grinds with one half of another, and you have an asymmetrical edge. This is probably the least common grind for kitchen knives. Some traditional Japanese knives make good use of it though, offering one edge that’s better for scaling fish and one that’s used for chopping vegetables.

Of course, we couldn’t talk about kitchen knife edges without mentioning the serrated edge. Thought to be invented sometime around 1900, the multiple points on a serrated knife edge make it perfect for slicing bread and tomatoes.

What Makes One Knife Edge Better Than Another?

So which of the above edges is best for your kitchen knives? It depends on what you’re using them for.

That’s what makes one knife edge better than another. If you’re looking for an all-purpose edge, it’s hard to go wrong with a V grind. But if you want maximum sharpness for your sushi and sashimi, a chisel grind works better. And of course, if you’re cutting a loaf of bread, serrated is the only way to go.

In Conclusion: How Many Types of Knife Edges Do You Need?

Now how does all of that relate to your choice of kitchen knives? For most home chefs, it won’t — a general V-shaped edge will take care of 95% of kitchen jobs.
But to really round out your selection of kitchen knives, it does help to have a serrated bread knife too. Between a chef’s knife, a paring knife, and a bread knife, you’ll be covered for almost any recipe you want to make.

If you’re not sure about what should you look for in a knife, here is our complete guide to the best kitchen knives.