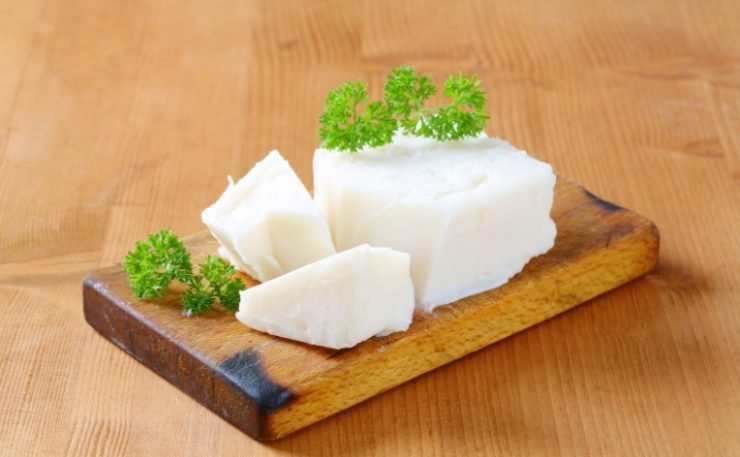 Shortening is a solid vegetable fat that makes fantastically flaky pie crusts and empanada doughs. It can also be used in recipes for cookies, quick breads, biscuits, pound cakes, and icings.

Since shortening has no water content, this means it has an excellent creaming ability in baking recipes. When creamed with sugars, it adds lightness and extra leavening once baked.

As a career pastry chef, shortening is not often my first choice for baking. Despite its creaming ability and affordability, it doesn’t contribute flavor and can also leave a greasy aftertaste.

When you don’t have any shortening on hand for a recipe or just want to avoid hydrogenated oils, here are 8 substitutes to replace it with great results.

My personal favorite for substituting shortening in a recipe, butter brings all the flavor and almost as much fat.

It has a bit more moisture than shortening at about 15%, depending on the brand. Due to this, it will detract a tiny bit from flakiness and can make baked goods a little flatter.

Despite this small issue, butter tastes better, has unbeatable flavor, and melts in your mouth when eaten. It’s worth it!

Butter can be used to substitute shortening in any baking recipe. Use room-temperature butter in buttercream frostings, too, for maximum flavor.

If you’re using butter for pan-frying instead of shortening, be aware that butter browns and burns more easily than shortening due to its milk solid content. Do not use butter for deep-frying.

For every 1 cup of shortening, substitute with 1 cup plus 2 tablespoons of unsalted butter.

Pro Tip: High-end unsalted and cultured butters designed for baking will usually have a lower water content, as low as 11%. If you can find these you’ll have even better results, though they do cost more.

Lard is rarely used in cooking today in the U.S., but is still used in many Latin American countries for good reason.

While working as a pastry baker at a Cuban restaurant, I accidentally discovered just how amazing pastries made with lard can be.

I couldn’t figure out why I’d been gaining weight one season, until someone told me that the irresistible guava empanadas I’d been eating regularly were made with lard-based pie dough!

While it’s not the healthiest (or vegetarian) option for baking and cooking, it’s reliable, and it truly does taste good. It’s also 100% fat just like shortening, so it’s a great direct substitute.

Lard makes for THE flakiest pie crusts imaginable. It can also be used in biscuits, tortillas, and pot pie crusts.

Coconut oil is a vegan option to replace shortening, and it’s also 100% fat with no water.

This substitution can work well in pie doughs, cookies, and almost any baked good.

Be forewarned, however, that it can make pie doughs a bit droopy on the edges. This may not be the best option for fancy pie crust patterns or lattice crusts.

If you’d like less of the coconutty flavor, go for refined coconut oil. However, I have not noticed an aftertaste once a product is baked with regular coconut oil.

If you’re using coconut oil to replace solid shortening, make sure you’re using it in its solid, scoopable state (especially for pie doughs and cookie recipes that involve the creaming stage).

If you’re using it to replace melted shortening, make sure the coconut oil is also melted for best results.

Use at a 1:1 ratio to replace shortening.

Ghee is a staple of Indian cooking. It consists of butter that’s been simmered and skimmed to remove most of the milk solids and water.

Due to its high price tag, it may be better to use it in smaller quantities rather than for large batches of a recipe. It’s also excellent to use for pan-frying in place of shortening, as it has a high smoke point.

Ghee can be bought in stores or online. If you’re feeling adventurous, there are also many tutorials online on how to make ghee at home.

Use ghee at a 1:1 ratio in place of shortening in recipes.

Vegan butter is another substitute for shortening that can be used in almost any recipe. The benefit of using “vegan” butter over plain margarine is that many types of vegan butter don’t use hydrogenated oils.

The disadvantage is that vegan butters are inconsistent from brand to brand, so you may have to try a few different ones to find your favorite.

When I was a pastry chef at a vegan restaurant, Earth Balance was our “gold standard” brand for vegan baking. Now there are many other choices out there, but it’s still one of the best and is very affordable.

Some vegan butters, like Miyoko’s brand, are even cultured and contain probiotics. Bonus! Though I doubt those survive after baking, the cultured flavor could make for exceptional vegan buttercream frostings.

Pro tip: Most vegan butter comes pre-salted, so you may need to reduce the amount of salt a little bit in your recipe to account for it.

Since shortening is made of 100% vegetable oil, it makes sense that liquid vegetable oil could be a suitable substitute.

However, you’ll only want to use this for recipes that call for melted shortening. This might include quick breads, cornbread, and pound cake recipes.

Don’t use vegetable oil in flaky dough recipes like pie dough or biscuits, as they require solid fat to achieve their layered texture.

Use vegetable oil at a 1:1 ratio for melted shortening in a recipe.

It’s not exactly a healthy alternative–but if that’s not your concern, try making use of your leftover bacon drippings from breakfast.

Save bacon fat to use in savory baked goods only, as it does have a strong flavor.

Try it in biscuits, cornbread, and pie doughs for savory recipes, like pot pies.

Use at a 1:1 ratio for shortening.

When substituting shortening, most replacements can be used at a 1:1 ratio.

Take care, however, with substitutes that have any water content in them. You’ll need to add slightly more of them.

Ingredients like butter and vegan butter may alter the texture of your finished baked goods. Try out different brands to see which creates your ideal results.

If you already have shortening at home but not enough for your baking recipe, consider trying a 50/50 mix of shortening and butter. You’ll get the taste of butter with the easy handling benefits of shortening.

With an understanding of these shortening substitutes, it’s a breeze to replace it with something you already have on hand at home, and with tasty results.

Can butter be used to replace shortening?

Yes, but you’ll need to change the ratio, since butter contains water. Use 1 cup + 2 tablespoons butter to replace 1 cup of shortening.

What’s the best replacement for shortening for deep-frying?

Vegetable oil is the best replacement for deep-frying with shortening, since shortening is made of 100% vegetable oil.

Butter is the best substitute due to its flavor, though your baked goods might rise a little less. Use 1 cup + 2 tablespoons butter to replace 1 cup of shortening.