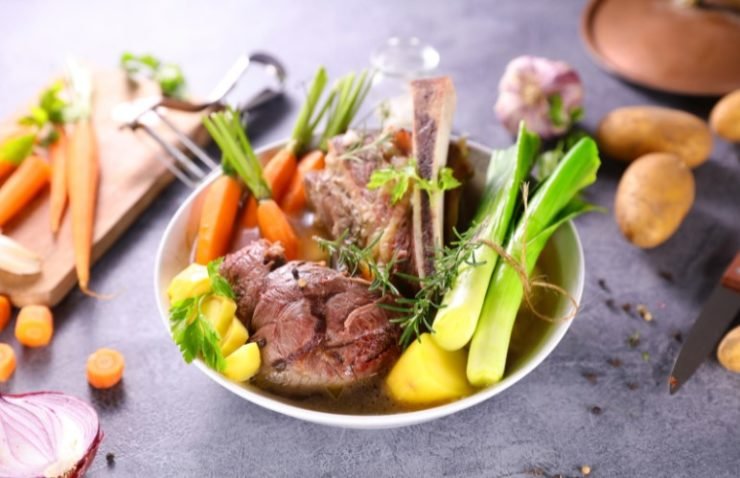 Stocks and broths are the backbone to many recipes. And the “secret” ingredient that often makes restaurant dishes taste just a little better than at home.

Beef broth is often the base of soups, stews, and braises that are rich and satisfying. But, if you’re not in a professional kitchen you may not have a good homemade batch on hand.

So, if you didn’t have the spare 12 hours it takes to make your own, or you just forgot to pick it up at the store, don’t fret. Here are the 10 best substitutes for beef broth that will get you through in a pinch, or when you just want to mix things up a bit.

Chicken broth is the next best thing when you’re looking to add a rich and meaty flavor to a recipe. While you obviously won’t get the same beefy flavor here, chicken broth is one of the more universal options, regardless of the recipe.

Just like with beef broth, chicken broth generally uses the same aromatic ingredients (onion, carrot, celery). So, you get a well-balanced stock with many of the same flavors going on in the background.

You can feel free to use chicken broth as a direct substitute with the same quantity and everything. But, the same isn’t true the other way around. Beef broth has a stronger and more pronounced flavor and color, so it’s not always the best substitute when the shoe is on the other foot.

Mushrooms have a great meaty flavor, that’s packed full of umami. And, when you make broth from them, you get a wonderful brown liquid that looks very similar to beef broth.

While you can make mushroom broth from fresh mushrooms, it’s much easier and less expensive to use dried ones. You can either simmer them with other vegetables and aromatics, or you can make a simple mushroom “tea” by simply steeping them in hot water for a few hours.

I like to keep dried mushrooms on hand for this exact purpose. Just in case I run out of broth or need to make a vegetarian recipe that still has rich, meaty flavor. And don’t forget to use the rehydrated mushrooms afterwards.

Vegetable stock isn’t quite as rich as beef broth, but it’s an easy substitute that goes well with anything.

This is an option that’s easy to find in any grocery store, but it’s also incredibly easy to make. And, it only takes about an hour to make, rather than the several hours required for meat-based broths and stocks.

You won’t get the same dark color that you get from beef broth, but you’ll still be adding great flavor to the recipe.

Bouillon is simply dehydrated and very concentrated broth or stock. To use them, you simply dissolve the cubes or powder in hot water and use it just the same as regular broth.

They come in beef flavor as well as many others like chicken, vegetable, and shrimp. These little packets can be a life saver and will last in your pantry basically forever.

They’re very convenient, but they do have some drawbacks. First, they tend to be incredibly salty. To help with that, I tend to use much more water than the directions call for. So be careful and be sure to taste yours before adding to a recipe.

The other thing is that they come packed with additional ingredients and stabilizers that really don’t belong in a good broth. So, it can be good to have on hand in a pinch, but don’t let them become a convenient replacement.

Soy sauce is packed with richness and complex flavors. On its own, it’s very salty, but it can be a great addition when used alongside vegetable and chicken broth or even water.

Soy sauce is packed with umami, which is the same foundational flavor that you get from things like roasted meat. That gives you a good way to add a sort of “meatiness” to vegetable stock or water.

Plus it’s a good way to add color to any light stock. Just be mindful not to make your broth too salty.

Worcestershire sauce is another ingredient that’s packed with complexity and richness. I think a lot of people use this in recipes without really knowing what it’s made of. But there are some really interesting and delicious ingredients going on in that little brown bottle.

I won’t list them all, but some of the flavors at play are vinegar, sugar, anchovies, and tamarind. All pretty intense flavors that cover most of the flavor spectrum.

So, by adding a little to vegetable stock, chicken broth, or water, you’re getting a big boost of richness and overall complexity. Along with a nice brown color.

Another way to add more depth of flavor and color is to use wine or beer. Both of these options can add a lot of their own flavor. So it’s important to consider the specific wine or beer you have and how they will go with the recipe you’re making.

Both options are usually best suited to long cook times. That way you can cook out most of the alcohol and mellow out the flavor.

Beer is a classic addition in meaty chili, and red wine is always a good choice for braised beef or stew.

Tomato paste is an easy way to make a flavorful broth that adds color and body to soups, stews, and braises.

The concentrated flavor of tomato paste is sweet, salty, acidic, and umami all in one. You can simply mix it with water, or for even more flavor, cook it down with a little oil until it starts to darken and stick to the bottom of the pan. Then, deglaze with water, wine, or stock and use as the broth in any recipe.

Fish sauce is a magical little ingredient made by salting and fermenting small fish, like anchovies or krill. Sounds appetizing right?

The result is like pure umami in a bottle, plus a little fishy funk. This is a staple in Vietnamese and Thai cuisine, but it can be a secret weapon to enhance the flavor of all kinds of soups and sauces.

If you don’t have any beef broth, try adding a few dashes to your recipe to up the savory notes of the dish. This stuff is potent though, so a little goes a long way.

Last but not least, the option that you’ll almost always have on hand. Plain old water won’t add much flavor to your recipe, but it will get the job done in a pinch.

And, if you’re making a braise or any meat-based dish that requires a long cooking time, water is a perfectly good way to go. After an hour or more of cooking with meat and vegetables, you’ll basically be creating your own flavorful broth as you go.

Remember Before You Substitute

Beef broth is a great way to add flavor, depth, and complexity to a dish. But, as you can see there are a whole host of ways to do the same thing with just one or two household ingredients. And who knows, one of these beef broth substitutes might even end up being better than the real thing for an upcoming meal.