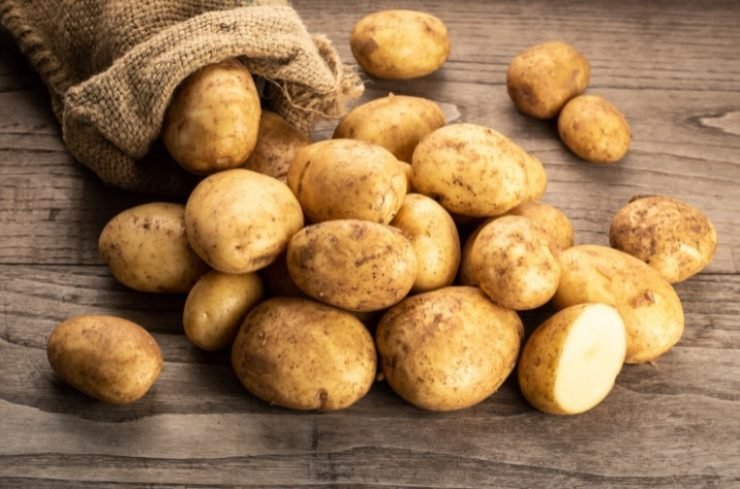 Whether you’re trying to follow a recipe or plan portions for your meal plan, understanding how many small potatoes are in a pound can be a helpful bit of information.

A small russet potato will usually weigh between 4-6 ounces, which means you’ll need 3 or 4 small potatoes to make a pound. But, it can get a little more tricky when you start throwing different types of potatoes into the mix.

Today, we’ll be doing a deep dive dig on potatoes. From their weights and types to buying and storing them.

How Much Do Potatoes Weigh?

Potatoes come in all different shapes and sizes.

One fingerling potato might only weigh an ounce or two, while a single large russet can weigh a whole pound or more. And those weights can be different from red and purple potatoes, which will be different from the hundreds of other varieties.

Helpful? I know, not really.

To make things easier, let’s talk specifically about good old russet potatoes. The ones with the rough brown skin and the most widely used here in the US. After all, these are the most common in recipes and most supermarkets.

In professional kitchens, we order russet potatoes in 50lb cases. And you choose your potato size by selecting the number of potatoes in that 50lb case.

An 8-ounce potato would be considered a medium-sized potato and is one of the most common options that you’ll find in restaurants and grocery stores. But, you can also get potatoes that are smaller or larger.

120/50s would be considered a small potato and you can expect each one to weigh around 6 ounces. On the other end of the spectrum are 40/50s (40 potatoes per 50lb case) where each potato would weigh over a pound.

Step into almost any professional kitchen and I guarantee most recipes will be written using weights. And the best way to make any of those recipes is with a digital scale.

The reason for this is that cooking with weights is faster, more accurate, and more consistent than cooking using volume (i.e. cup measurements).

All of those things are very important in a restaurant, but can also have a big impact on making you a better cook at home. Plus, without all the tablespoons, cups, and ⅓ cups, it’s fewer dishes to do at the end of the day!

With a digital scale, you can easily find out how many potatoes (or any other ingredient) make up a pound, no matter what size they are. It’s an inexpensive way to level up your cooking and baking game with very little effort.

Other Types Of Potatoes

As I mentioned earlier, there are hundreds of types of potatoes grown around the world.

Even though most grocery stores only stock a handful, you can still get a variety of tastes and textures from the options available.

You just have to know what you’re looking for.

Potatoes are generally separated into two categories; starchy and waxy.

When cooked, starchy potatoes have a dry, fluffy, and sometimes mealy texture. While waxy potatoes are denser, smoother, and creamier.

The russet (sometimes called Idaho) potato is likely the only starchy potato you’ll come across in most stores. This is the quintessential baking potato for its light and fluffy texture. It’s also the most common choice for french fries and works well for mashed potatoes.

Yellow potatoes are the second most common after russets and come in similar size variations. This is a waxy potato with dense yellow flesh and works well for almost any application except as a baking potato. There are a variety of different yellow potatoes but the most common is the Yukon Gold.

Red potatoes are another waxy variety with thin, red skin and white flesh. Red potatoes also go by the name of Red Bliss and are commonly used for boiled potatoes, stews, and potato salad.

Sometimes going by the name of California white, these potatoes are very similar in taste and texture to red potatoes. The one big difference being the color of the skin. White potatoes have a very light brown or yellow skin, with dense white flesh.

Purple potatoes also fall under the waxy category, although they can be more mealy and crumbly than the other waxy varieties. Purple potatoes have thin, purple skin with dark purple flesh that retains its color even when cooked.

Purple potatoes have a rich, almost nutty taste that’s a nice change of pace from the other varieties. But be careful when using it with other ingredients as the color can bleed and affect the appearance of a dish.

Fingerling potatoes are small and narrow. They are waxy and very firm with a rich and buttery taste. Fingerlings are great boiled, fried, or roasted whole, and even make great mashed potatoes.

Fingerlings do tend to be more labor-intensive to grow and harvest, so these are likely to be one of the most expensive options that you’ll come across.

How Many Potatoes Come In A Bag?

Aside from buying individual potatoes at the grocery store, you often have the option to buy pre-weighed bags. Not only is it convenient to have them already in a sturdy bag, but you can often get some cost savings this way as well.

Often coming in bags that weigh 2lb, 5lb, or 10lb. With the smaller 2lb options, it might be easy to feel and count how many are inside.

If you’re buying a larger quantity that’s not always so easy. And if you’ll be making something like baked potatoes for a group, you’ll want to know exactly how many you’re getting.

Most commonly, grocery stores will stock bags of medium-sized potatoes.

That will usually be either 90s or 100s (the number of potatoes in a 50lb case). So, we can estimate that each potato will be in the 8-ounce range.

These are rough estimates of what you would commonly find. But obviously smaller potatoes will have more per bag, while larger ones will have less.

When buying potatoes, look for ones that are very firm and uniformly colored. Avoid potatoes that have begun to sprout, are soft or shriveled, or show any green discoloration.

Potatoes that have begun to sprout are well on their way to the next stages of life and will not last very long in the kitchen. Use these immediately by cutting away any sprouts, or bury them in your garden, and maybe you’ll be harvesting your own potatoes in a few months.

To keep your potatoes at their best, keep them in a cool, dark, humid area with good air circulation. If you have a good old-fashioned root cellar (I’m jealous), that’s the place for potatoes. For the rest of us, a cool cupboard or closet will do the trick.

Also, avoid the temptation to store potatoes in the fridge. This will cause starches to convert into sugar, which will negatively affect the taste and texture.

In perfect conditions, your potatoes will last for weeks or even months. But when stored in the kitchen, where it’s often quite warm and bright, you’ll be looking at more like a week or two before they begin to sprout.

How Much Does An Average Size Russet Potato Weigh?

An average size russet potato weighs around 8 ounces or a ½ pound. Small russet potatoes usually weigh 5 or 6 ounces, while large ones will weigh 10 ounces or more.

How Many Potatoes Does It Take To Make A Pound?

How Long Do Potatoes Last Before They Go Bad?

When stored in perfect conditions potatoes can last weeks to months. When stored in a cupboard or on the kitchen counter you will usually get between 1 and 2 weeks until they start to go bad.