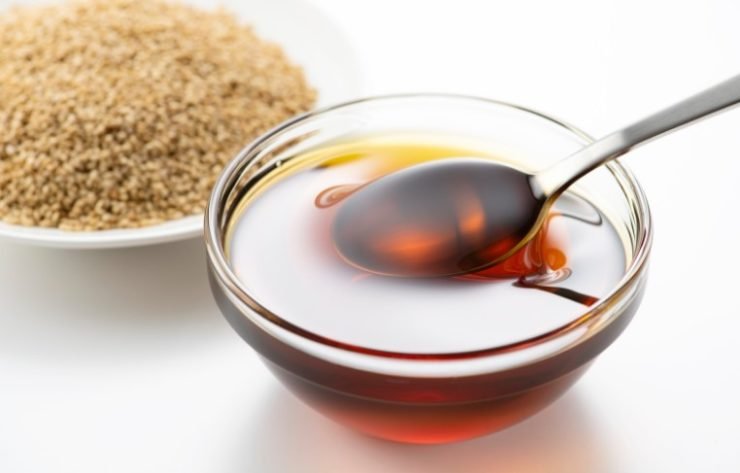 The plain kind has very little color or flavor, so you can easily substitute it with any neutral-flavored oil.

The toasted variety on the other hand is savory and nutty, I like to think of it as the extra virgin olive oil of China.

My grandma would add a drizzle to just about everything just before bringing it to the table. This would immediately create an incredible aroma throughout the house. A signal that it was time to eat.

If you don’t have any sesame oil but you have sesame seeds, you can easily make a pretty good makeshift version of your own.

Simply toast your sesame seeds in a dry pan until they are golden brown. Then add whatever neutral oil you have on hand. That means anything without its own strong taste, grapeseed is my go-to, but you can also use vegetable or canola oil.

Steep the seeds in the oil over a warm burner for around 30 minutes and you’re good to go.

Pro Tip: If you see any bubbles or movement in the oil it’s too hot and can end up tasting bitter.

This is a good way to get a similar toasted sesame flavor, but it will be much milder than the real thing.

This may not be a common ingredient here in the states, but it’s a staple in Korean cuisine. It’s made similarly to sesame oil, but with the toasted seeds of the perilla plant.

Perilla oil looks almost identical to sesame oil and has a similar toasted, nutty flavor. It’s a perfect substitute that can be drizzled onto dishes as a finishing oil just like you would with sesame oil.

This is another option where you’ll probably need to venture into a Korean or other international market, or you may have some luck finding it online.

Sesame paste is made entirely of ground-up toasted sesame seeds. So, while it isn’t an oil, it’s still made from the exact same ingredient. That makes this one of the best substitutes when you want that roasty, toasty, sesame flavor.

Sesame paste has a similar texture to peanut butter, which makes it work well as a sauce, or mixed into noodles or stir-fries.

Since sesame paste is primarily a Chinese ingredient, your best bet will be to look at your local Asian or international grocery store. It’s also not to be confused with tahini, which is made from raw, untoasted sesame seeds and has a very different flavor.

Remember: Mix your sesame paste at room temp, then store it in the fridge to keep it from separating.

Peanut oil is technically considered a neutral-flavored oil. But, since it’s made from roasted peanuts, it adds a delicious toasted nuttiness to any dish.

The flavor isn’t nearly as pronounced as sesame oil, but it will still add similar notes in a much more subtle manner.

Since peanut oil has a very high smoke point, it’s a great all-purpose option that can be used for just about everything. And, it goes particularly well within most Asian dishes.

Walnut oil has a fairly delicate flavor, and while it doesn’t add toasted flavors like sesame oil, it does add a savory nuttiness to the mix.

You can certainly use walnut oil to cook with, but you’ll lose a lot of its flavor, and it tends to be on the expensive side. That makes it best suited as a finishing oil, or an addition to sauces or vinaigrettes.

Extra virgin olive oil has a very different flavor profile than sesame oil, and it’s not exactly commonplace in many Asian recipes. But, it does have a miraculous way of tasting great on any and everything it touches.

So, while this isn’t going to make up for the flavor of sesame oil, it will add richness and complexity to any dish. I also think it’s a great in-a-pinch substitute because most people probably keep a bottle in their kitchen at all times.

You can cook with extra virgin olive oil, but you’ll get more flavor and benefit by using it raw as a finishing oil.

Brown butter is made by caramelizing the milk solids in butter. This cooking process creates an incredible roasted nutty flavor that adds a lot of complexity to dishes.

While you won’t find much butter in most Asian cuisines, this is a good way to add some of the nuttiness that you would normally get from sesame oil.

Brown butter can be added to any warm dish, but it will solidify when cold. So, if you’re looking for a sesame oil substitute in a cold sauce or vinaigrette, you’ll want to look elsewhere.

Consider This Before Picking An Alternative

Sesame oil is primarily used to add flavor to sauces or as a finishing oil at the end of the cooking process.

Since most oil alternatives have a more subtle flavor, you may need to add a little more than you normally would. But, you should also be careful not to add so much that the dish becomes oily.

If you go the sesame paste route, you might have to get a little creative in how you add it to your recipe. Since you won’t be able to simply drizzle it on at the end, you could try incorporating it into another sauce that will then be added to the dish.

I think the best thing to remember is to taste, taste, taste. Taste the substitute by itself, then add small amounts to your recipe and continue to taste until you’re happy with the end product.

What Is A Good Sesame Oil Substitute In Fried Rice?

Perilla oil is a good finishing oil substitute for fried rice. Or, try using peanut oil as your cooking oil, and then finishing the dish with actual toasted sesame seeds.

What Is A Good Sesame Oil Substitute In Teriyaki Sauce?

If you don’t have sesame oil for your teriyaki sauce, simply add a spoonful of toasted sesame seeds and let them steep in the sauce until you’re ready to use it.

What Is A Good Sesame Oil Substitute For Dumplings?

A spoonful of sesame paste in your dumpling filling is a good way to add a similar flavor from the inside out. Many chili oils also contain toasted sesame seeds, so try making a dipping sauce by mixing equal parts soy sauce and one of those chili oils.