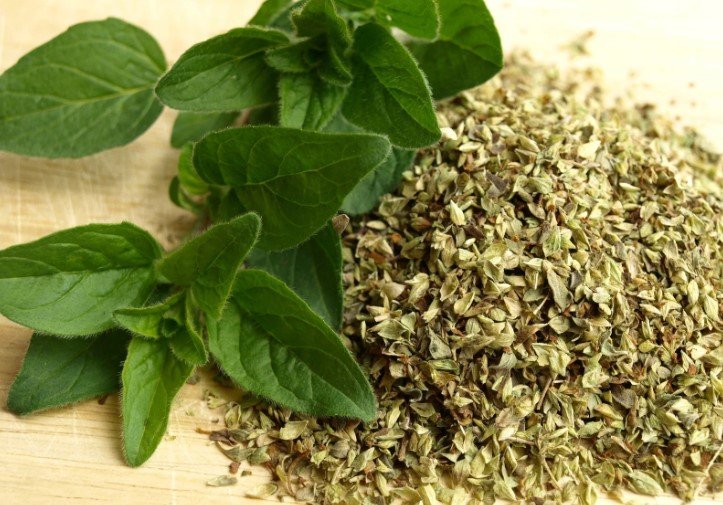 If you need the flavor punch of oregano in a recipe but realize you’ve run out, we’ve got you covered. Oregano is an easy herb to substitute in a pinch. I would guess you already have at least one of these substitutes on hand in your spice collection as we speak.

Oregano is well-loved in Italian, Greek, and Mexican cuisines. It can add its slightly peppery, herbal vibe to soups, seafood, chicken, and potatoes. It’s also a winner in tomato-based dishes and goes great with beans.

Whatever kind of dish you’re making, this list will provide you with options for oregano substitutes so you can keep on cooking.

Basil’s flavor is similar to that of oregano in that it’s aromatic and slightly peppery. It can be cooked into dishes or minced and sprinkled on top. The fresh herb is also quite nice when cut thin (chiffonade-style) and used as a flavorful finishing garnish.

To use basil in place of oregano, start with a 1:1 ratio. And as with most herbs, do your best to use dried basil to replace dried oregano and fresh to replace fresh.

Believe it or not, Mexican oregano is from a different botanical family than standard oregano, which originated in Greece. It’s delicious in Mexican cuisine, but it also complements seafood and chicken dishes.

Mexican oregano is my favorite–I don’t even buy the other kind anymore! It has a stronger flavor than standard oregano and is more earthy, with bright hints of mint and citrus.

Since Mexican oregano is so potent, you’ll only need to use half the amount of the Mexican variety compared to regular oregano. If you’re having a hard time finding it, check the Mexican food section of your local supermarket or Latin American grocery store.

Marjoram can successfully replace oregano in soups, vegetable dishes, and pizza sauce. Try it with chicken and pork dishes for a scrumptious home-cooked flavor.

Because this herb is closely related to oregano, its flavor has overlapping qualities. However, it’s more subtle than oregano and tastes more floral than it does peppery.

Unfortunately, marjoram won’t hold up as well to slow cooking as oregano does. This means it’s better to add this substitute toward the end of cooking so its flavor stays intact.

Thyme is another close substitute for oregano. It works best in vinaigrettes, soups, stews, and hearty winter dishes. Try it with meats, potatoes, and tomato sauce for a warm, herbal flavor.

The flavor of thyme is close to oregano, and so is its strength. It has a pungent flavor that tastes green and makes me think of a pine forest (in a good way).

There are different varieties of thyme, each with a unique aroma and taste. Try garden varieties like lemon thyme and mint thyme for a fun flavor change.

If you’re using thyme as an oregano substitute, a 1:1 ratio is a good place to start.

Pro Tip: Mix thyme (or other herbs) with softened butter and refrigerate it for a deliciously spreadable and meltable topper for pasta, potatoes, and toast.

If you have Italian seasoning in your spice cabinet, you’re in luck. While it’s an easy fix in tomato sauces and pasta, this seasoning also works great in chicken and fish recipes.

It’s a super easy replacement for oregano since it already contains the herb, along with several of the substitutes in this list. It usually includes oregano, basil, rosemary, thyme, and marjoram. Sometimes it might also have lemon zest or chili flake.

This Italian-inspired spice blend is highly flavorful and well-balanced, which means it goes with almost any savory dish. It’s a bit more potent than straight oregano, so use half the amount to replace the oregano in your recipe.

Sage is a deeply savory substitute for oregano that’s suitable in richer meat dishes. It goes exceptionally well with pork and lamb. Also try sage with roasted vegetables and other seasonal winter dishes like shepherd’s pie.

This fuzzy-leaved herb is highly fragrant. It’s pungent and has a deep earthy flavor reminiscent of pine. It’s easy to find dried or fresh, both of which must be cooked into a dish, as it’s not good eaten raw.

Since sage is so strong, go lightly with it as an oregano substitute. It can take over a dish if you’re not careful. For a well-rounded flavor, consider cooking it with other complementary flavors like garlic, onion, and bay leaf.

Rosemary can take the place of oregano in soups, roasted vegetables (especially potatoes), and tomato sauces. It’s also a fragrant addition to chicken and lamb dishes.

This herb has a similar earthy flavor to oregano and is strongly aromatic. Due to its potency, it’s easy to overpower your dish if too much is added.

To use fresh rosemary, remove the leaves from the stem and mince them finely. Then, add it sparingly to your recipe in place of oregano, at one pinch of rosemary for every teaspoon of oregano.

Another way to avoid overdoing it with rosemary is to ensure it’s not stewed too long. Try adding it about halfway through cooking in soup and stew recipes for best results, and avoid using it in long cooking crock pot recipes.

The two main varieties of parsley are curly and flat-leaf Italian parsley. Both varieties are deep green in color and much milder than oregano in flavor. Though milder, they pair well with most dishes calling for oregano.

Curly and Italian parsley are mostly interchangeable and are best when minced finely before using. They can be added right to a dish while cooking, in a salad dressing, or used as a finishing garnish for color and flavor.

Use parsley as a 1:1 substitute for oregano.

Tarragon has a fascinating flavor that can take the place of oregano in some recipes. It’s a winner in salad dressings, egg dishes, and fish and poultry recipes.

This herb has a unique flavor compared to oregano, but it is definitively herbal. It’s fragrant, dark green, and anise-scented.

Fresh tarragon leaves are quite delicate and don’t hold up well to cooking for an extended time. It tends to work best in quick-cooking recipes. That being said, it’s still a potent herb that has the potential to overpower a dish.

Like oregano, some herbs can be added at the beginning of cooking and still retain their flavor. These include Italian seasoning, thyme, and Mexican oregano.

Some herbs can lose their flavor, however, or get too concentrated in a dish if they’re cooked for too long. These include rosemary, sage, tarragon, basil, marjoram, and parsley. These can be added during the last half of cooking, so the flavor doesn’t become too overpowering.

Additionally, dried herbs can usually withstand slightly longer cook times than fresh ones. If you’re substituting dried herbs for fresh herbs, use ⅓ the amount of dry to replace the fresh ones.

Finally, if you want the flavor of an herb to permeate the dish but don’t want any physical pieces in it, make a sachet with cheesecloth or a reusable tea bag. This can be especially useful for the more potent and woody herbs like rosemary that can be overpowering if you bite down on a large piece.

What’s the best replacement for oregano in soup?

This would depend on the flavors of your soup, but thyme and marjoram are two great choices.

How can I replace oregano in chili?

Try Mexican oregano in your chili, which comes from a different plant. It’s stronger in flavor, so you’ll only need to use half as much.

What can replace oregano in taco seasoning?

Mexican oregano is perfect for taco seasoning and comes from a different plant family. Find it in a Latin American grocery or in that section of the supermarket.