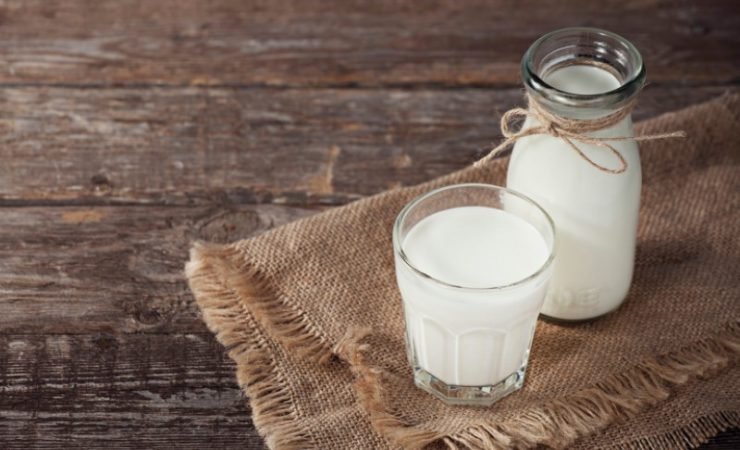 Knowing what to substitute for milk is crucial when you don’t have it on hand, are considering allergies and dietary needs, or just want to try something new!

In this article, I’ll walk you through several dairy and non-dairy alternatives to milk and the best use cases for each option.

As a pro cook who has run out of milk more than once, and as a father of a son with mild dairy allergies, here are the best milk substitutes that I’ve used.

If dietary needs or allergies aren’t a consideration and you simply don’t have milk on hand, one of the following ingredients will work as a substitute for milk in a pinch.

Heavy cream lasts a long time in the fridge and is great to have on hand.

To substitute for milk, mix with water in a 1:1 ratio.

Diluted heavy cream is a great substitute for milk in recipes like pancakes, for baking, or for creamy sauces.

Half and half is one part heavy cream to one part whole milk.

Use it as a substitute like you would with heavy cream, but you don’t have to use as much water.

Evaporated milk in the can is an awesome and overlooked milk substitute, especially for baking!

Dilute the evaporated milk with water because it is so thick and sticky. I would add a teaspoon of water at a time to avoid making it too runny.

Evaporated milk is very sweet, so consider that when you’re using it as a substitute. It can be amazing for sweet baked goods, but I’d refrain from using it for a savory cream sauce.

Yogurt’s fat content makes it an excellent choice to stand in for milk if you can dilute it with water.

Yogurt has quite a tang. Keep in mind how that will mesh with the flavor profile of the dish you’re substituting milk for.

I consider it a bit more “flavor neutral” than yogurt, but it does need to be diluted as well.

To use it as a milk substitute, use a ratio of one cup of water to one cup of sour cream because of how thick it is.

Stir and mix to get a nice consistency.

Sour cream is such a great substitute for milk that I tend to choose it ahead of milk or heavy cream when I make mashed potatoes.

7 Non-Dairy Milk Replacements For Any Situation

Soy milk is high in protein and rich in omega-3 fatty acids. On a macronutrient level, it’s the most comparable to dairy milk of all plant-based milk options.

Soy milk is fine for drinking, but can be used for baking and cooking as a stand-in for dairy milk.

Coconut milk is high in fat and is my favorite non-dairy milk substitute for baking. Because of its fat content, it’s ideal for recipes where the consistency of dairy milk is crucial.

Use canned coconut milk for recipes. I’ve used boxed “coconut beverage” in the past by mistake. It is intended for drinking and doesn’t have the consistency or fat content that is great for cooking.

Coconut milk can impart a coconut flavor, so if that flavor is particularly offensive to you, don’t use it. In baking, especially with desserts, I’ve found the flavor to be very mild or even unnoticeable.

Almond milk is made from filtered almonds and water. You can actually make it at home without too much trouble.

I use almond milk mostly as a drink alternative to milk, as its watery texture makes it less than ideal for baking.

Unsweetened almond milk can be pretty flavor neutral, so consider using it in a recipe where you could substitute water for milk.

Rice milk is made with boiled brown or white rice. It is usually sweetened when sold commercially.

It is high in calcium, but low in fat and protein.

Because of its low fat content and watery texture, I would recommend against using it for baking or cooking when you’re seeking the creamy texture of dairy milk.

As a drinking option it is a fine choice.

Oat milk is creamy in texture and has a great taste. It is a fine substitute for baking.

It is loaded in carbs, low in protein, and often has more sugar than other plant-based milks. These are things to consider from a nutritional standpoint.

With that said, it is definitely my favorite plant-based milk to pour into a bowl of cereal or to dip cookies into.

It tends to be more expensive than other plant-based milk alternatives, so keep that in mind if you’re on a budget.

This is a great option for blended fruit smoothies.

Avocado isn’t suitable as a liquid substitute for recipes, but for blended smoothies, it adds a creaminess that not even milk alone can achieve.

If your recipe calls for a small amount of milk, like 1/4c or less, consider using water instead.

Can I use water instead of milk for baking?

For baking, I would recommend coconut milk for its fat content, or soy milk for having similar macro nutrients to milk. If the recipe calls for a very small amount (¼ cup or less) of milk, using water shouldn’t harm the integrity of the recipe too much.