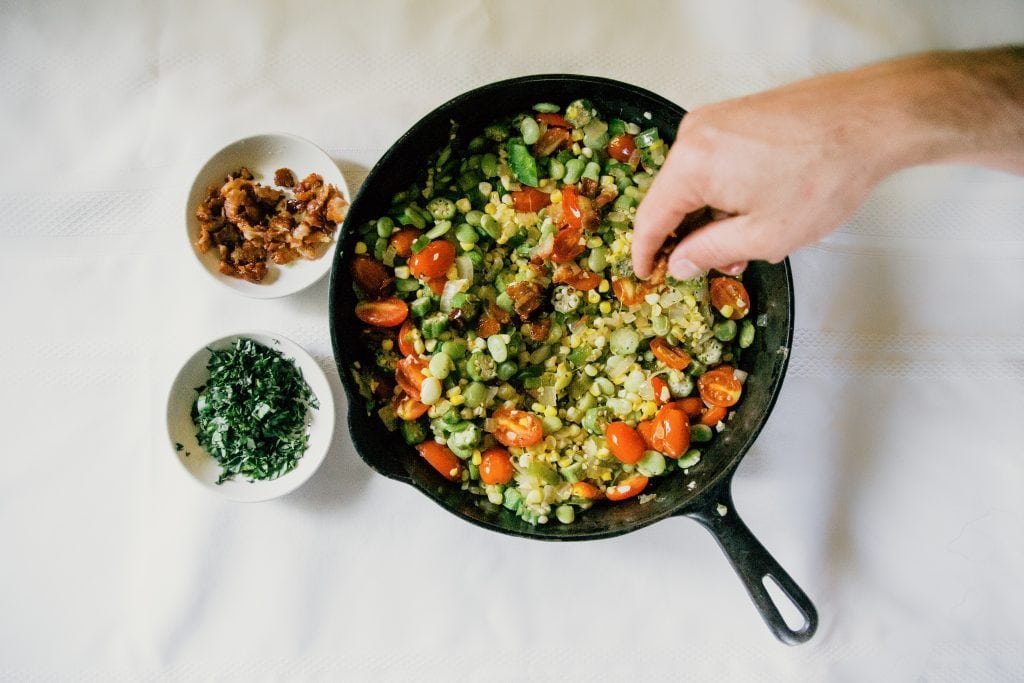 As I write this, we’re already well into the dog days of summer in Alabama which puts us squarely in succotash season. The days are still long and hot, but this week we felt the first breaths of autumn breeze approaching.

Other families may enjoy this dish during the cooler months, using mostly canned or frozen ingredients. That’s fine. After all, it’s rumored that succotash was once a gift from Wampanoag or Narragansett tribesmen at the first Thanksgiving.

In this family, we simply like to serve it when the vegetables are fresh.

Although the phrase “suffering succotash” is not rooted in contempt for the dish, succotash has been a polarizing fixture in many families. It is prepared in a thousand different ways, almost always using corn and beans.

I recently stumbled across a personal essay about an Ashkenazi family in New York who served a plain, sad, canned version of the dish once-a-year at Thanksgiving in homage to their adopted homeland. To quote the author’s recount of her grandmother, ““It’s American. It’s tradition. We have to serve it. It goes with the holiday. We’re not American, if we don’t serve succotash.”

To be fair, “Suffering succotash” is a minced oath used as a corrupted form of “suffering savior.” The root phrase was considered profane in puritanical cultures like colonial America, so they dressed it down. Some people might suggest that eating succotash is equivalent to divine suffering, but we’re here to show you that simply isn’t the case

The secret to awesome succotash is finding the right ingredients. It takes no special skill, and is a lot easier to accomplish in late summer when the crops are fresh in the American south.

There are dozens of varieties of sweet corn grown in the South. It’s part of a common regional crop rotation that includes cotton and peanuts. In Alabama, we harvest more than half a million acres of corn each year during the late summer.

The firm texture and crisp taste of fresh corn are essential to this dish. Soggy canned corn simply won’t do the trick. Choose ears of corn with the husk and silk still attached. Pull back slightly to expose the kernels and confirm that they are full, healthy looking, and without gaps or dead space between them.

In the South, Okra is a coveted superfood. These green seedy pods were originally brought to our warm climates from Africa, and they quickly became a staple in creole and soul-style cooking.

When preparing succotash, pick okra that is firm and 2-4” long. The fruit pods are tender and most suitable for eating when they’re young. As the season progresses the pods get bigger, woodier, and more difficult to cook without becoming slimy. Okra slime may be a great characteristic for thickening gumbo, but it’s not a welcome texture to most palates or a great fit for succotash.

Flash-frozen baby lima beans are the best fit for this dish. Other kitchens may use larger “butter beans,” which are commonly canned or dried.

Butter beans and baby limas are actually the same species of legume, although they have a slightly different culinary profile. We find that you can achieve a more distinctive flavor, crisp texture, and avoid drying out the dish with baby limas.

Fun fact, “lima beans” gained their name because of their port of origin during the 1500s. These legumes have been cultivated in Peru for 7,500 years and were spread throughout North America and Europe by the Spanish in boxes marked from “Lima, Peru.”

To make a vegan substitution, replace bacon grease with olive oil to cook the vegetables. While it’s simple and necessary for some eaters to take a vegan spin, we find that the bacon base really brings the flavors together. The bacon fat is semi-solid at room temperature, which also helps to pleasantly thicken the end product.

What we consider succotash in today’s South has been shaped by the history of race relations and economics here. Like many southern traditions, the dish was first borrowed from native peoples, adapted by African Americans, and eventually commercialized by white settlers.

Foods like succotash and gumbo were adapted to include ingredients like okra, tomatoes and black-eyed peas by African Americans during slavery, and later as many became subsistence farmers during post-Civil War Reconstruction.

The staying power of this dish may have as much to do with economics as it does the flavors. It’s said that succotash was popular during the Great Depression because the ingredients were readily available at an affordable price.

How To Serve It

This dish is always content to play second fiddle. Serve it on the side.

We love succotash as an accompaniment to chicken and wild rice. That’s how we are preparing it today. We discovered that our recipe tastes amazing with a dash of Argentine chimichurri, which is easy to concoct with fresh garden parsley.

Why We Love It

At this point, succotash tastes like the late summer season to our family. We won’t prepare it unless all of the local vegetables are fresh, so it’s something to look forward to.

It is flavorful and full of color, and from a simplified nutritional perspective eating the rainbow is really good for you.

The secret to awesome succotash is finding the right ingredients. It takes no special skill and is a lot easier to accomplish in late summer when the crops are fresh.