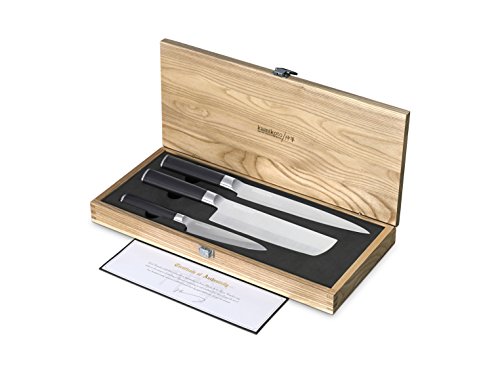 - Japanese steel is durable and corrosion-resistant.

- Great performance for the price.

- Not a great choice for beginners.

- No options for different bolster styles.

- Don’t buy at the inflated “full-price” on the Kamikoto website. It’s a sales gimmick and you can always get these knives for a cheaper “on-sale” pricing there or on Amazon.

Kamikoto knives are a fine example of traditional Japanese knives. Their single bevel blades take some finesse, but deliver exceptional cutting power. Beginners may have trouble getting used to this new blade style. But intermediate and experienced cooks will love how incredibly sharp they are. And with a price that’s comparable to other Japanese knife brands, they’re a fine choice for any home kitchen. 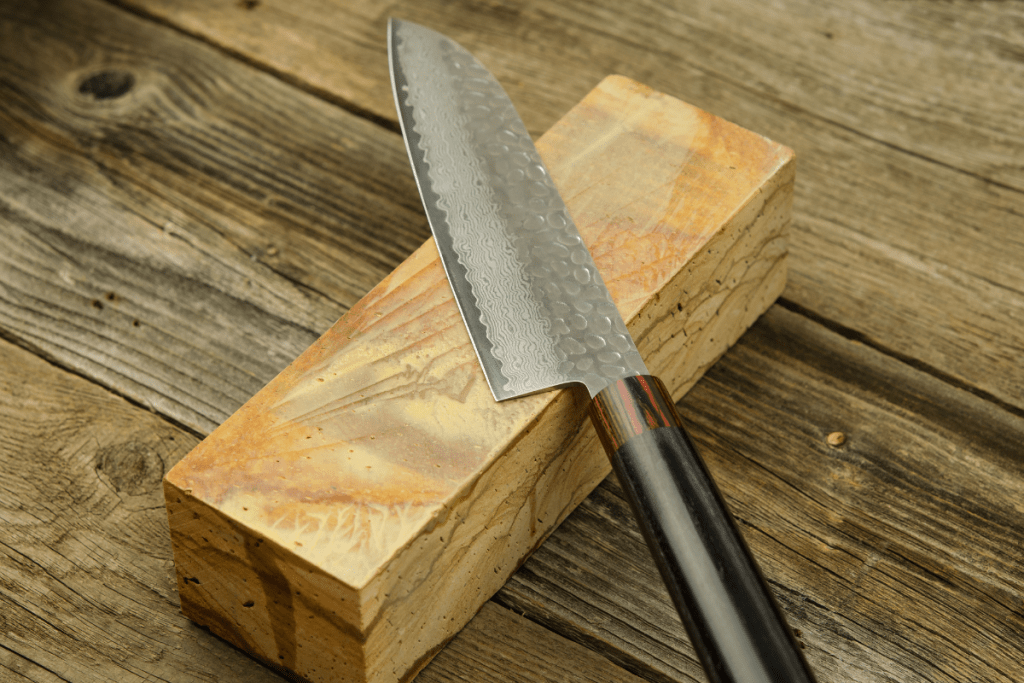 There’s stiff competition in the Japanese knife category. Are Kamikoto knives the real deal, or are they well-advertised but unremarkable?

That’s what I’m here today to consider in our Kamikoto knife review. I’ve collected a fair bit of wisdom and experience with cutlery in my decade of professional kitchen work, and am happy to put it to good use.

Together, we’ll take a close look at everything you need to know about Kamikoto knives. By the end of this guide, you should be equipped to decide whether Kamikoto knives are worth adding to your kitchen.

Buyers Guide: Everything You Need to Know About Kamikoto Japanese Knives

This is especially apparent in their single bevel blades. Also known as “chisel” style blades, this sharpening method yields a single incredibly sharp edge. Because of this, Kamikoto knives require that owners use a special cutting technique that’s different from standard knives. Once chefs get used to this way of slicing, though, it offers unmatched control and precision.

Although Kamikoto is based in Japan, their high-end knives are actually produced in Yanjiang, China. While this fact has drawn the ire of some online reviewers, my take is that their concerns are overblown. Here’s why,

Just as Seki, Japan has a centuries-long history of knife making, so does Yanjiang. And since Kamikoto uses Japanese Niigata steel for all their knives, they’re of the same discerning quality as any other Japanese blade.

My only genuine gripe with Kamikoto is their confusing pricing scheme. They make a big show of explaining that their direct-to-consumer model lets them sell at lower prices. But on their website, the “original” price is still displayed as an inflated number, sometimes into the thousands of dollars.

My advice? Ignore this sales-y gimmick and focus on the quality of the knives relative to their actual listed price. And when you do that, I think you’ll see that Kamikoto has a lot to offer any Japanese knife enthusiast.

To get a good sense of what Kamikoto offers, let’s explore their most notable knives. We’ll take a look at the flagship Kamikoto kanpeki knife set, as well as the more classic senshi set and a santoku knife.

The Kamikoto kanpeki knife set is the most traditional of the company’s offerings. And if you’re interested in using authentic Japanese cutlery, it’s the real deal. The high-quality steel knives are exceptionally sharp and durable. And better yet, they’re resistant to corrosion in a way most Japanese knives are not.

You get three knives in the Kanpeki set:

And those three knives come packaged in an attractive wooden box with a certificate of authenticity. Kamikoto believes in their knives enough to offer a lifetime warranty, too, so your investment is a safe one. The kanpeki set is my top choice from Kamikoto’s knives, as it gives you a lot of bang for your buck. 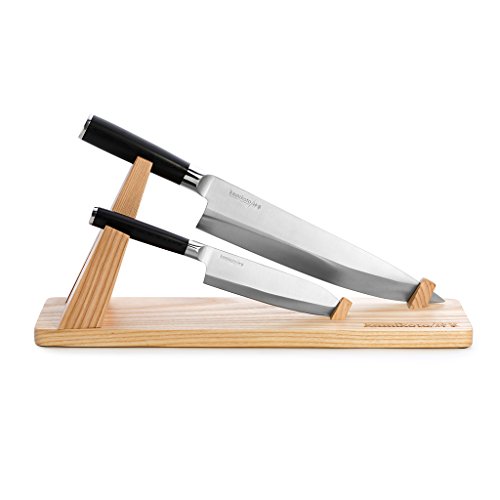 The senshi knife set will appeal to the kitchen knife purist. It features an unstoppable duo of a 10-inch chef’s knife and a 5-inch utility knife. Mounted on an aesthetically pleasing wooden display stand, it’s worthy of becoming the center of attention for your kitchen.

The same high-quality steel is used in all Kamikoto knives, meaning that this knife set is razor-sharp with great edge retention. Once you get used to the single bevel blade on this big and weighty chef’s knife, you may never want to go back to your Western-style blades. 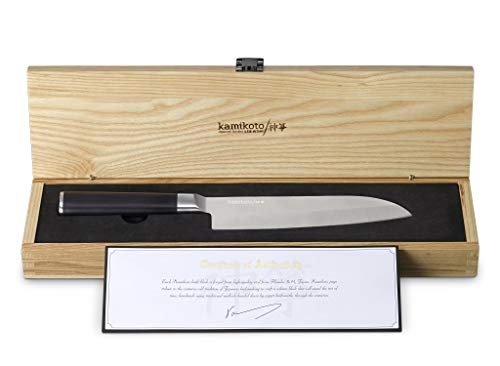 The word santoku doesn’t translate to “three virtues” for nothing! They’re a versatile alternative to a chef’s knife that can handle meat, seafood, and vegetables with ease. And Kamikoto’s santoku is a marvelous blade that’s even sharp enough for preparing sushi and sashimi.

At 7 inches long, Kamikto’s santoku knife is easier to handle than an 8- or 10-inch chef’s knife. And thanks to the single bevel and hard steel construction, it can make accurate and precise cuts.

Compared to other santoku knives on the market today, I prefer this one because of its single bevel edge. Instead of needing scalloped edges to keep it from sticking, the blade angle takes care of smooth cuts.

Considerations Before You Buy

When considering whether Kamikoto knives are up to snuff for my own kitchen, these are the features and details I would look for.

Put Kamikoto knives side by side with knives at a similar price, and you’ll immediately notice how different they look. Simply put, Kamikoto knives are made in a much older style than most knives available today. That gives them a different feel that may be unfamiliar at first.

Once you have a few days’ practice under your belt, the design of these knives becomes more apparent. They’re amazingly well-balanced and allow for incredibly precise cuts. Paired with refined bolsters and matte black handles, they look great too.

It’s helpful to know the parts of a knife, and include them in your considerations. Knife construction can be broadly broken down into three categories:

Absolute sharpness is where Kamikoto’s knives really excel. Not many knives today use the traditional single bevel edge, as it requires a certain cutting style to use well. By not abandoning this historic touch, Kamikoto’s blades are sharper than almost any knife I’ve used.

You’ll need to either learn how to sharpen your knife using a whetstone, or take it to a professional sharpener. This is one of the few downsides of Kamikoto knives’ design. Sharpening a single bevel edge is tricky, and not every home chef will be up to refining their skills to do so.

Keep in mind that though Kamikoto’s blades are corrosion-resistant, they’re not stainless steel. You’ll still need to thoroughly dry them before storing them. And to keep them in the best shape possible, you’ll need to apply mineral oil to them on a regular basis.

All of Kamikoto’s knives are made in the full tang style. This means that a single piece of metal extends through the entire knife, from blade to handle. That makes for the strongest and most durable blades possible. Paired with the high-quality steel they use, this full tang design makes Kamikoto’s knives nearly invincible. Properly cared for, you’ll be able to hand these knives down to the next generation of your family.

Of course, the best knife in the world isn’t a good choice if the price isn’t right! And if you ignore the inflated “discounts” listed for Kamikoto knives, they’re actually a good deal.

Shun, Miyabi, and Yoshihiro are the three main competitors to Kamikoto. And knife-for-knife, each of these competitor blades costs the same as (or more than) Kamikoto’s knives.

So when it comes to choosing a Japanese knife, you’ll need to decide which features are most meaningful to you. If traditional style single bevel blades and wooden handles tickle your fancy, Kamikoto is a great choice.

Before we wrap things up, let’s take a closer look at the most common questions surrounding Kamikoto knives.

Both professional chefs and amateur foodies will wax poetic about the virtues of Japanese knives. But what makes them better than old-school stainless steel knives? In truth, it’s not a matter of “better” — just different.

Most western knives use just one type of steel. Japanese knives use a mixture of high and low carbon steels. As a result, Japanese blades are harder and stiffer. Because of this, they’re also able to take a sharper edge and keep it longer.

Having harder steel isn’t only an upside, though. Japanese blades are more prone to chipping if they run into an unyielding surface, like a bone. And to keep them in peak condition, you’ll need to use a special sharpening block.

So in short, Japanese steel knives are sharper at the cost of requiring more care and maintenance.

Why Are Japanese Knives Expensive? Are They Worth it?

While the materials used in Japanese knives are undoubtedly high quality, that’s not where most of their cost comes from. It’s because of the long and highly specialized process of hand-making each blade.

Traditional artisans will spend up to a decade learning how to craft Japanese knives. Even then, it takes days or weeks to complete each hand-forged piece. And in my experience, that attention to detail shows through in the knives’ performance. They’re some of the sharpest and most well-balanced knives you’ll ever use.

So yes, Japanese knives are definitely worth the price!

Where Are Kamikoto Knives Made?

Kamikoto knives are made in Yanjiang, China with steel imported from Japan. Does that make them any less of an artisan product? Definitely not.

Let’s address the stigma of an expensive product being “made in China”. Though this has come to be associated with cheap and mass-produced products, Kamikoto’s knives are anything but.

Yanjiang, China has been the center of Chinese bladesmithing for centuries. So rather than reducing the quality of the product, Kamikoto draws on Chinese artisans to add a unique flair to Japanese knife designs.

Which Knives Should I Have In My Kitchen?

The types of knives you’ll need for your kitchen will vary from person to person. What’s right for a beginning cook will be drastically different from a long-time home chef. But no matter your level of skill in the kitchen, you’ll need to start out with a great chef’s knife. From there, add a paring knife to take care of small and delicate jobs. After that, take a deep dive into knife selection with my guide to essential kitchen knives.

Kamikoto’s knives deserve a place next to other major Japanese knife makers’ products. They’re every bit as well-made as any other Japanese knife on the market today. That said, their single bevel design makes them a better choice for experienced cooks than for beginners. If you’re willing to practice with this new edge style, you’ll get a set of knives with unparalleled sharpness and cutting power.

You can check out the full line of Kamikoto knives here.