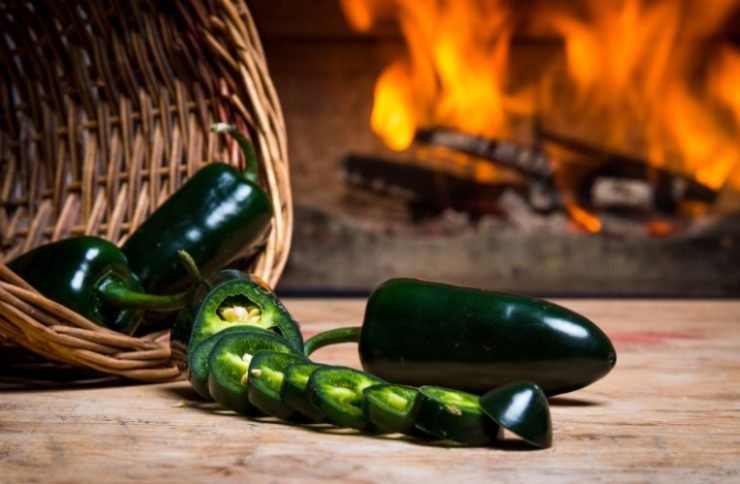 Jalapeños have a distinct flavor and a mild heat that measures at 2,500-8,000 SHUs (Scoville heat units). It’s tough to find an exact fill in, but there are other suitable peppers and spices you can use as an alternative when you’re in a pinch.

In this article, I’ll share options for replacing jalapeños that range from other peppers to spices, and sometimes even a combination of the two. I’ve included some substitutes that might surprise you, but can be helpful in replacing jalapeño’s bite.

As a cook who’s run out of jalapeños at my restaurant, and as someone who’s had a batch of jalapeños go bad at home, here are 10 substitutes for jalapeño that can stand in for jalapeño’s heat or flavor.

Try using them to make any recipe that uses jalapeño quite a bit hotter!

Shishito peppers are great in recipes where you want the flavor of jalapeño without the heat. With peppers ranging from 100-1,000 SHUs, they are much milder than jalapeños.

Substitute shishito for jalapeño in salsas or garnishes you want to make milder, or if you’re preparing a dish for someone who doesn’t like spicy food.

Pro-tip: You can reduce the spice from a jalapeño itself by deseeding it! Cut the jalapeño in half, and with a spoon, carefully scoop the seeds out and discard.

Anaheim peppers are another milder substitute for jalapeño, with a spice level that ranges from 500-2,500 SHUs.

An Anaheim pepper’s flavor is about in between a bell pepper and a jalapeño, and they are much bigger than a jalapeño.

I think anaheim peppers are an especially great substitute for stuffed jalapeños, with their bigger size making them a bit easier to work with.

Bell peppers, like red, green, orange, and yellow peppers, don’t seem like an obvious choice to substitute for jalapeños because of their sweet flavor and low spice.

I’ve substituted bell peppers in chili because of their thick skin and texture, but what tied it together was adding cayenne to the bell peppers to replicate the jalapeño’s heat.

Habanero peppers have a bit of a floral and tangy flavor, but the biggest difference between them and jalapeños is heat. Habaneros are significantly spicier, ranging from 100,000-350,000 SHUs.

Habaneros are a great substitute when you want to add a lot of extra kick to your recipes.

Fresno peppers are pretty similar in appearance to jalapeños. They are just a bit spicier at 2,500 to 10,000 SHUs, but also have a fruitier taste.

Fresno peppers also have thin walls, so keep that in mind when you cook them, because they will cook faster and tenderize more quickly.

Their best use as an alternative to jalapeño is as a garnish when you’re trying to replicate the look of jalapeño.

Jalapeño powder can sometimes be hard to find at the market but you can easily order it online. It is made from ground dried green jalapeños.

If you have a hard time keeping fresh jalapeño, jalapeño powder is a great shelf stable alternative that replicates the heat and flavor.

I like to use it in soups and sauces, and it is especially great in chilis when you don’t have fresh jalapeño on hand.

Cayenne is a great substitute for jalapeño, and a lot of us already have it on hand!

To approximate the heat level of jalapeño, substitute ½ tsp of cayenne for one jalapeño in a recipe.

For a recipe that calls for diced or sliced jalapeño, consider mixing cayenne powder with yellow bell pepper. I’ve done this many times at restaurants when I need the texture or jalapeño but don’t have it on hand.

Red pepper flakes are made from a mix of peppers and are a lot spicier than jalapeños, ranging from 15,000-30,000 SHUs.

I like to use them when I’m trying to substitute for the heat of jalapeño in a recipe. Add no more than a teaspoon at time, and taste as you go to mind the spice level.

Ginger might seem like a strange substitute for jalapeño, but it can work great in stir fry!

Consider using ginger to add a very mild spice to a dish.

Can I use poblano instead of jalapeño?

Poblano is much milder than jalapeño, and its flavor makes it a better substitute for green bell pepper versus jalapeño.

What spice can I substitute for jalapeño?

For heat and spice, you can substitute ½ tsp of cayenne per jalapeño in a recipe. Jalapeño powder is an option that can be bought online.

What can I substitute for jalapeños in guacamole?

Serrano peppers have a similar flavor to jalapeños, but are much spicier. Keep in mind that serrano peppers can be 5-10 times spicier than a jalapeño. Mixing bell pepper with cayenne powder works great for guacamole as well.