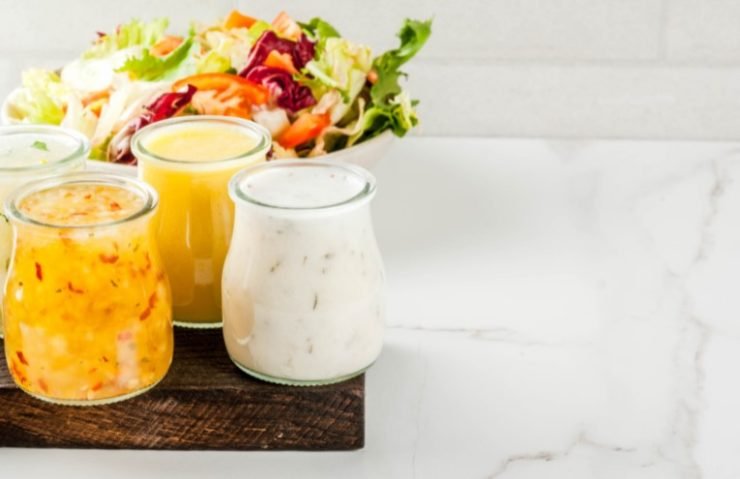 Italian dressing is a popular choice for salads and may seem to be vegan.

It largely depends on what companies decide to put in their product. Otherwise, vegans will have no issue whipping up Italian dressing at home.

Vegans need to pay special attention to the ingredients on the back of an Italian dressing bottle, as not all of the vegan dressings will be labeled as such. Specific components to look out for include:

Cheese is a dairy product, so it’s inherently not vegan. Egg yolks and milk are often added to dressings to make them creamier and help the oil and water stay together, but they’re both animal products and need to be avoided by vegans. Luckily, most grocery store Italian dressings won’t have eggs listed as an ingredient.

How to Make Vegan Italian Dressing

Italian dressing is a relatively simple recipe, but recipes will often call for cheese to add extra flavor and texture. Sure, you could omit the cheese and still create a great vegan Italian dressing, but it might be better to follow a vegan recipe from start to finish.

Making vegan Italian dressing isn’t a complicated process, though you might find some vegan recipes that go over-the-top in their preparation. Some people like to add cashews or nutritional yeast, but they’re not necessary to have in your Italian dressing. If you already have them lying around, though, you can always experiment and add them to your sauce.

Truthfully, you only need a few key ingredients in your vegan Italian dressing:

If you’ve got a blender you can make it with ease. For that matter, you can also just add to a jar and give it a vigorous shake.

Homemade Italian dressing is delicious, but it will only save for about two weeks, so make sure you’re consistently using it during that time.

While not every store-bought Italian dressing will be vegan, there are options out there for vegans who don’t have the time to hand-make salad dressing. Some store brands that are vegan-friendly include:

The only iffy option from the list is Daiya because even though the company is well-known for supplying dairy supplement items, it still lists xanthan gum as an ingredient.

Vegans who aren’t worried about its origin should be fine, but those who are vegan to a T may want to avoid the creamy Italian dressing from Daiya.

Here’s the short answer to “is Italian dressing vegan?”: Sometimes.

Many store-bought Italian dressings will include ingredients that are not vegan-friendly, and therefore shouldn’t be eaten by those who practice veganism. However, there are some fantastic at-home vegan Italian dressing recipes and store-bought substitutes that will satisfy the salad craving.

Also, not everyone follows veganism the same way. If you accidentally, or even knowingly, eat Italian dressing that has non-vegan ingredients in it, it’s not the end of the world.

Accidents happen, and just because you’ve eaten a tiny bit of dairy doesn’t mean you’re no longer a vegan. The important part is that you’re trying to stick to veganism as much as possible.

Ok, it’s 2021 and you’re searching for “vegan dressing” so I’m guessing you know the basics of veganism. If you’re not up to speed, here’s a quick primer:

Vegans will often eat lots of rice, beans, vegetables, and fruits because they’re all not animal products. Veganism means not eating cheese, eggs, animal milk – pretty much anything that comes from an animal. Being vegan isn’t for everyone, but it’s crucial for practicing vegans to know the ingredients in their store-bought items, including their Italian salad dressing.