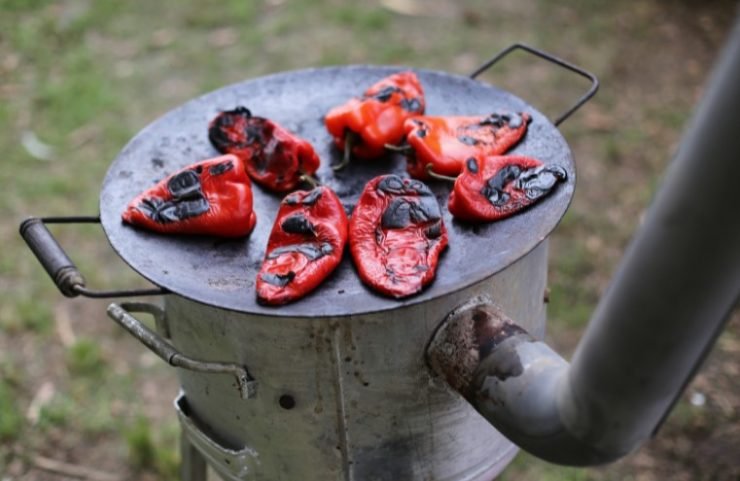 Raw bell peppers are great fine on their own, but when roasted they’re elevated to an entirely new level of deliciousness.

Give my toddler a slice of raw bell pepper and she’ll look at you like a crazy person. Give her a $10 jar of roasted peppers, she’ll knock it back and you’ll have a friend for life.

Lucky for her, and my wallet, how to roast and peel bell peppers is something I learned early in culinary school and practiced often in many restaurants after. So, stick around and I’ll share everything you need to know from choosing the right pepper to roasting, peeling, and storing them.

Bell peppers are a non-spicy fruit in the capsicum family. They’re available in a whole rainbow of different colors, from red and green to yellow, orange, white, and purple.

The most common bell peppers that you’ll come across are green and red.

It’s a little known fact, red and green bells are the same pepper at different levels of ripeness. When left on the plant, green bell peppers will ripen into red ones.

This fact also makes a big impact on the difference in flavor between the two.

Since green bell peppers are technically underripe, they have a tart flavor compared to any of the other colors. That also means they have a shorter growing period, which makes them the least expensive of the bunch.

Since red peppers are fully ripe, they tend to be one of the sweetest options among any of the colors available. And while you can roast and peel any of them, red peppers are often the most popular because of just how sweet and tender they become.

Look for bell peppers that are firm and feel heavy for their size, without any soft or shriveled spots.

Pro Tip: When it comes to roasting, try to pick peppers that have a smooth and flat exterior with fewer deep grooves and bends. This will help make the whole roasting and peeling process easier.

How To Roast And Peel Bell Peppers

Mise En Place is a French kitchen term that translates to “everything in its place”. It’s a fundamental idea that teaches us to be organized and prepared before we actually start cooking.

For roasting and peeling peppers, it’s a simple task of gathering a few pieces of equipment to get the job done.

To clean your peppers, simply rinse them thoroughly under cool water. Pay attention to the stem area as dirt can hide there and it’s often the first place that mold starts to grow.

Ok, there are a few different options here.

For simplicity, I’ll break them down into two categories: fire roasting or broiling.

Fire roasting is my preferred method. It’s generally faster than using an oven and it gives you more control over how well cooked and soft your peppers are in the end.

You can do this on a grill, directly over a gas burner on your stovetop, or with a blow torch

First, set your grill or gas burner to medium-high heat.

Place your whole, cleaned peppers directly on the grill or on your burner grate.

Rotate the peppers periodically until the entire thing is uniformly charred. If it looks completely black, you’re doing it right.

If you’re using a blowtorch, place your peppers on a sheet tray or in a cast iron pan. Place that on a heat-proof surface like your stove, and torch away.

If you don’t have access to any open flames, you can also get the job done in your oven.

First, preheat your broiler and position an oven rack somewhere between 3-5 inches below.

Next, split your cleaned peppers right down the middle, from stem to base. Then remove the core, ribs, and seeds.

Place the halved peppers cut side down (skin side up) on a sheet tray. Feel free to line your pan with foil for easier clean-up.

Now, put the tray of peppers on the rack under your broiler. Every broiler is different so check your peppers after about 5 minutes and keep a close eye on them after that.

They won’t get as uniformly charred as over an open flame, but you’re looking for lots of blistering and nice wrinkled skin.

The benefit of this method is that you’ve already done a lot of the work by removing the seeds and stem ahead of time.

The downside is that you tend to lose more of the pepper’s natural juices. And, your peppers are likely to be very well done and quite soft in the end, but that’s not necessarily a bad thing.

No matter which method you used, take your hot roasted peppers and place them in a sealed container. This could be your covered bowl or a large plastic bag.

Leave the peppers to steam for about 10 minutes.

During this steaming period, your peppers will release some moisture and pull away from the skin, making the next step much easier.

If you did the broiler method, simply place your pepper halves flat on a cutting board, skin side up, and use your fingers or a knife to scrape off the skin.

Or, if you have whole peppers, trim off the stem, then lay your pepper flat on your cutting board and scrape off the seeds and ribs, then the skin.

Unfortunately, there’s not much you can do with the skins and seeds of the peppers. After roasting they’ll either be leathery and tough or basically burnt to ash.

If you’re just dealing with bell peppers, bare hands are just fine. But, if you’re roasting and peeling hot peppers you might want to use rubber gloves for this step. Especially when dealing with the ribs and seeds, as that is where most of the heat is stored in hot peppers.

Store your roasted and peeled peppers in an airtight container in the fridge for between 1-2 weeks. They can be left whole, or sliced into strips so that it’s easier to grab manageable portions without having to do any further prep when you want to eat them.

For frozen storage, I prefer using freezer bags, or better yet a vacuum sealer, because you can get all of the air out and protect the peppers from freezer burn. Stored this way, they should easily last for several months.

Roasting or charring the skin on bell peppers makes them incredibly easy to peel by hand or with a knife. This method can also remove some of the tartness you get from a raw pepper, and adds to their sweetness.

How Do You Peel A Pepper Without Roasting It?

If you don’t want your pepper to be cooked at all, you can simply peel them using any standard vegetable peeler. You can also blanch them in boiling water, or microwave and steam them to easily remove the skin.

Why Do You Peel Peppers?

You do not have to peel peppers. In many cases, they are peeled because the skin can become tough and papery when cooked.