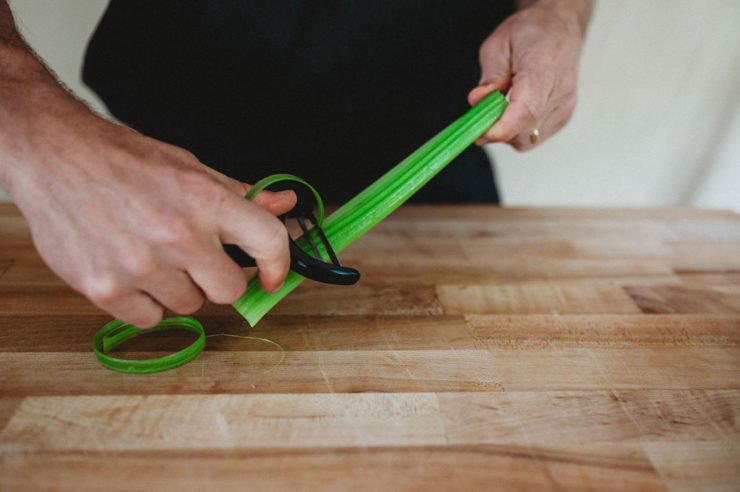 Celery is a versatile vegetable used in cuisines around the world. It may not get a lot of time in the vegetable limelight, but it’s a foundational flavor in many dishes.

Celery is a key member of a French mirepoix and the “Southern trinity,” not to mention it’s exceptional portability and snack-ability.

While it’s usually not necessary to peel celery when you cook it, removing those tough, fibrous strings makes a world of difference when you eat it raw.

So, whether you’re using it as a side for buffalo wings, or fixing up a sophisticated snack á la ants on a log, stick around while I break down how to peel celery.

But First, Choose The Right Celery!

I have to admit, when buying celery, I often make my selection pretty haphazardly. Especially when compared to the scrutiny I put things like peaches and avocados through.

But, if you do take an extra few seconds to make a mindful choice, you can avoid dry, bruised, bunches and get celery that’s crisp and will last much longer in your fridge.

Look for whole celery bunches that feel very firm, crisp, and hold together tightly. It’s generally best to buy whole bulbs rather than individual stalks because they will have a longer shelf life. Plus, the inner pieces are protected, keeping them from being bruised and damaged.

Avoid celery that looks dry, bruised, or floppy and limp. The outer leaves should also be very green and not show signs of yellowing.

While it’s not necessarily bad to buy pre-bagged celery bunches, the ones that are out and exposed to a water mister are often the best and most crisp option.

How To Peel Celery With A Knife

Before you get to peeling, take any celery stalks that you’ll be prepping and thoroughly rinse them under running water.

Pay close attention to the bottom and inner, concave areas of each stalk. Celery grows in the ground after all, and that’s where dirt and sand love to hide.

Depending on how your celery was cut in the field, it may help to do some additional trimming before you start peeling.

If the top of your celery stalks are starting to branch off or have leaves attached, either pinch them off with your fingers or trim them with a knife.

Then, lay your celery on a cutting board and remove the very top and bottom of each stalk.

While not always the case, it’s common for the very top of each stalk to be dry or discolored where it was initially cut. As for trimming the bottom, this is primarily just to remove the jagged edge where the stalk was broken from the bunch.

Save any celery trim and leaves to be used in your next batch of stock or pass it through your juicer with some other fruits and vegetables.

Hold a cleaned and trimmed celery stalk in your non-dominant hand and a paring knife in your other.

At the very top of the stalk, start making a shallow cut, then use your thumb to pinch the celery against the blade of the knife.

Now, pull your hand (and knife) down the length of the celery. As you do this, the tough, fibrous celery strings should easily come along with you and be removed.

Turn the stalk slightly and repeat along the outer edges of the top of the celery.

Depending on the strength of the fibers, you may remove an entire strand from top to bottom. But, if your celery strings break off at any point along the stalk, flip it over and repeat the process. This time going from bottom to top.

Vegetable Peeler vs Knife: Which Is Better?

Another, and maybe more obvious choice for peeling celery, is a vegetable peeler. The name says it all, celery is a vegetable and you want it peeled. Case closed. Well, not exactly.

When you use a vegetable peeler, it removes a full layer of the celery. And in most cases, that’s not exactly what we’re after. All we really want to get rid of are the tough, fibrous strings located beneath the outer layer of each stalk.

When you use the knife technique, you’re not technically peeling the vegetable. Instead, you’re pulling out those tough strings but leaving most of the celery skin intact.

Now, the amount of celery being removed with a peeler versus a knife isn’t that drastic, but it still results in more waste. Plus, a peeler makes for an extra dish that will need washing in the end.

What if I don’t have a knife or a peeler you say? Well for one, you should be better prepared and you’ll do fine with a little extra fiber.

But also, not to worry! You can simply use your hands to snap the celery stalk at one end. Then, pull the broken piece down the length of the stalk and most of the strings should come along with it.

Do You Have To Peel Celery In The First Place?

The main reason for peeling celery is to remove the tough, chewy, fibrous strings. And this is generally only a concern when eating raw celery sticks. Crudité platters, ants on a log, and things of that nature will really benefit if you peel your celery first.

Any time you’ll be using short, thin slices, or small diced celery, peeling is most likely not going to make much or any difference.

Those tough celery strings are really only a problem when they are in long strands. So by using small cuts, you’ll be severing the strings into very short segments, making them mostly unnoticeable.

The strings also break down and become tender fairly easily when cooked. So even if you use large chunks of celery in something like a stew or pot roast, you’ll be just fine leaving them unpeeled.

Should You Remove The Strings From Celery?

You should remove the strings from celery if you’ll be eating large, uncooked pieces. The strings will break down when cooked and are not noticeable when cut into small pieces.

What Is The Stringy Stuff In Celery?

The stringy stuff in celery is called collenchyma. It’s a type of tissue in many plants that holds and transports water and provides structural support.

Do You Need A Knife To Peel Celery?

A knife is one of the best ways to peel celery but it’s not required. You can also peel celery with any vegetable peeler, or even with only your hands by snapping one end of a stalk and then pulling away the tough strings.

Learn how to peel celery with a knife for the best results and highest yield.

Keywords: How to peel celery, peeling celery with a knife