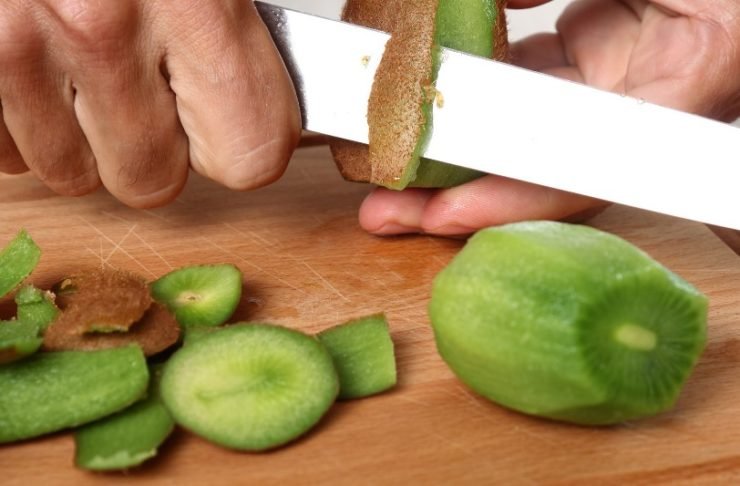 Kiwi is a delicious tropical fruit, and it can quickly brighten up a smoothie, ice cream, or salad. But it’s no secret that kiwi can also be an intimidating fruit to prepare if you’ve never done it before.

Why is the outside fuzzy and prickly? Do you eat it? And most importantly, how do you remove it?

Peeling and cutting a kiwi couldn’t be simpler. Read on to learn the three best ways to peel a kiwi with tools you’re sure to have in your kitchen.

Peeling a Kiwi is an easy task if you have the right tools.

You’ll need a cutting board and sharp paring knife no matter which peeling method you choose.

And depending on which method you pick, you may also need a vegetable peeler or a regular old metal spoon. Don’t worry, I’ll explain shortly.

3 Ways To Peel A Kiwi

Even though you’ll be removing the peel, you still want to give your kiwi a good wash.

This is to remove dirt, dust, debris, and pesticide residue before cutting or peeling since this could introduce detritus to the flesh of the fruit you’re only moments away from enjoying.

Method 1: With A Knife

Peeling your kiwi with a paring knife requires the least kitchen tools and will only take you a couple of minutes.

This method also gives you the most precision and control over how much kiwi fruit goes to waste when trying to remove the peel.

Begin by placing your washed kiwi fruit longways on your cutting board.

Slice off both ends of the kiwi using your paring knife to create a stable surface for safe cutting.

Now stand your kiwi up, so one cut end is against your cutting board, and the other end is facing up.

Line your paring knife up right where the kiwi flesh meets the peel and create thin slivers of peel, following the curve of the kiwi.

Take your time here. If you go too quickly, you may cut too deep into the kiwi itself and lose some of your yield.

Keep rotating your kiwi and cutting strips of peel off as you go. Circle the entire fruit until you’re left with nothing but smooth, bare, bright green, juicy goodness.

Method 2: With A Peeler

If you’re less confident in your knife skills, a vegetable peeler can be a very helpful tool. Plus, it’s fast, and you’ll end up with very little waste.

Begin by placing your washed kiwi fruit longways on your cutting board and slicing off both ends.

Now, cup the kiwi in the palm of your non-dominant hand. You want to expose an entire side of the kiwi so the skin is easy to access.

Place the blade of the vegetable peeler at the line where the kiwi peel meets kiwi flesh.

Following the curve of the fruit, drag the peeler from cut end to cut end, removing the peel in small strips.

Continue until your entire kiwi is peeled and ready to eat.

Method 3: With A Spoon

Using a small metal spoon to peel a kiwi is my favorite method. It’s less precise, but it works spectacularly well. It also requires little concentration and is an excellent option for prepping a large amount of fruit at a time.

Pro-Tip: Hang onto those kiwi skins, especially the ones with fruit still attached. You can add them to your smoothies! The peels will add fiber, and you can disguise the texture by blending in berries with seeds like strawberries, raspberries, or blackberries.

Begin by placing your washed kiwi fruit longways on your cutting board and slicing off both ends. This will give you a stable place to stand the fruit and a good view of where the kiwi flesh meets the skin.

Next, stand your kiwi up and position the tip of your spoon at the seam between kiwi peel and flesh.

Press the tip of the spoon into the kiwi until you hit the cutting board. Try to angle your spoon to follow the curve of the kiwi, so you don’t miss out on any precious fruit.

Now shimmy the spoon around the kiwi, separating peel from flesh around the entire fruit.

Lastly, slide the outer ring of peel off of the fruit, et voila.

Pro-Tip: An alternative method is to slice the unpeeled kiwi in half short-ways and then scoop each half with the spoon. It’s not as fast, but it works great if you’re only peeling a few kiwis.

To cut your peeled kiwi into slices, simply position the kiwi on its side on your cutting board.

Then, slice through the kiwi with your paring knife to create round slices at your preferred thickness.

If you’d like to cut your peeled kiwi into wedges, first cut your kiwi in half lengthwise with your paring knife.

Then stabilize the slippery kiwi by placing the long cut side down on your cutting board.

From there, slice the kiwi in half again to make quarter wedges. If you want to go smaller, continue to cut each wedge in half again.

To dice your peeled kiwi is to go one step further after creating wedges.

Line up the wedges on your cutting board and cut perpendicular to them to create kiwi dice.

If you want to store your kiwi after peeling, you’ll want to create an airtight seal to best preserve the fruit.

You can wrap a whole or halved kiwi tightly in cling film before storing it in the fridge. You’ll want to do this for each kiwi to keep as much air out as possible, so this option is best for storing just a few fruits.

If you need to store more, you can keep them whole or slice them how you’d like, then pack them tightly together in an airtight container in the refrigerator.

Properly stored peeled kiwi will keep in the refrigerator for two to three days.

Are kiwi skins harmful to eat?

Kiwi skins are edible, but you may not like the fuzzy, fibrous texture. If you can find them, there are no-fuzz varieties available as well.

What is the fastest way to peel a kiwi?

A quick method for peeling a kiwi is to slice off both ends of the fruit, slide a spoon between the flesh and scoop out the fruit. Fit the spoon’s curve to the peel and gently shift it along its inner side until the fruit comes away from the peel.

Should I refrigerate kiwis?

You can keep unripe kiwis in a brown paper bag on your counter for 2-3 days until slightly soft and yielding to the touch. Once the kiwis ripen, transfer them to your refrigerator.

Learn step-by-step how to peel a kiwi with a paring knife, vegetable peeler, or spoon.

With A Paring Knife: