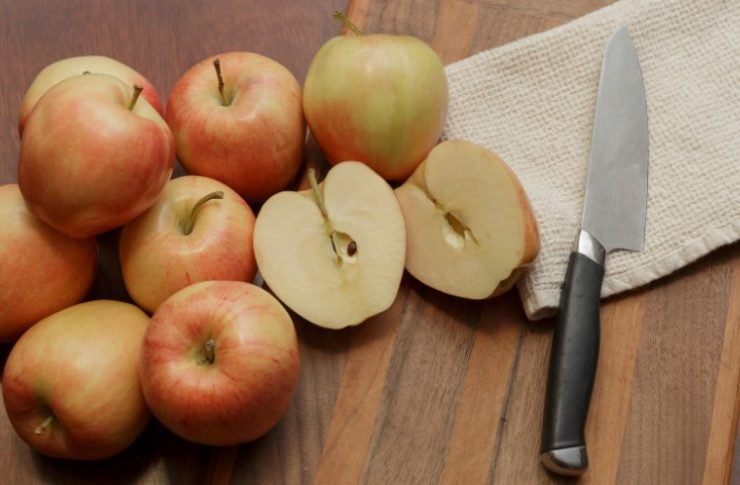 In this article, I’ll share a few simple methods to slice apples, and suggest some tools that can make it even easier, especially when you need to slice apples in bulk.

As a cook who has made his fair share of apple crisps and fruit and cracker plates, and as a father who packs school lunch almost every day, here are some tried and true, simple ways to cut an apple for all your needs.

Before I cut any apple, I like to rinse it under running water while I rub it to remove any visible dirt or particles. This also helps remove any pesticides that may be present on the peel. As a general rule of thumb, wash and rinse all your fruits and vegetables as a part of preparation.

3 Easy Ways To Cut An Apple

This is my go-to method for cutting apples for slicing and dicing.

It doesn’t require an extra step for coring, and if you’re using the apples for apple pie or apple crisp, go ahead and peel them first.

You may want to peel the apples for a snack, too, or if your kid doesn’t like the texture. Just remember that the peel contains nutrients like vitamin K, vitamin A, vitamin C, potassium, calcium, and fiber!

To dice the apple into cubes, rotate the slices 90° so you can make crosscuts.

With An Apple Slicer & Corer

If you don’t feel comfortable using a knife, have a lot of apples to slice, or just want something that is easier and more convenient, consider using an apple slicer & corer.

This tool makes for even slices, and is very easy to use.

Place an apple, stem side up, onto the base, and press down with the handles.

This can be easier to use for kids, too, but please still mind that the blades are sharp.

With An Apple Peeler, Corer, Slicer

The Pampered Chef Apple Peeler, Corer, Slicer is a godsend if you make a lot of desserts like apple pie or apple crisp. This tool peels, cores, and slices the apple while you crank the handle. I consider it a true feat of engineering.

It is a bigger investment than a simple, handheld slicer and corer. But if you’re prepping a volume of apples it may be worth it.

The first time I saw one of these at the restaurant I worked at I was amazed at how much time it saved for such a tedious task. We sold many apple crisps a day, and this made preparation so much easier.

This particular apple peeler, corer, slicer is unique in that it clamps onto the end of a table or counter. There are similar products that suction onto the countertop, but I’ve found this to be more stable and a bit less clumsy. Suction variants of this device can be more prone to moving or destabilizing.

After using this device, you will have an intact “ribbon” of apple that has retained its shape and has the core removed. Simply slice this in half, and you have uniform slices that are especially great for apple crisp or apple pie.

I highly recommend this if you slice a lot of apples in bulk.

Pro-tip: Thoroughly wash, rinse, and dry this device after each use. It has a lot of moving parts, and apple remnants can gum up and reduce the lifetime of this handy tool.

How To Store Sliced Apples And Prevent Browning

When the “flesh” of an apple is exposed to air, it quickly oxidizes and browns. If you are not using the apple slices right away, here are a few tricks to keep your apples from browning too quickly.

Bind With A Rubber Band

This is my favorite way to store apple slices for lunch.

Reorient your slices into an apple shape, and put a rubber band around it.

This keeps the fleshy sides of the apple against each other, keeping them from being exposed to air, and reduces the chances of browning quickly.

Pro-tip: Cosmic crisp apples are especially slow to brown, which makes them great for packed lunches.

Store In Zipper Bag And Remove As Much Air As Possible

With this technique, we’re going to emulate a vacuum seal to reduce exposure to air.

Place apple slices in a plastic zipper bag evenly spread apart. Insert a straw about ¼ way into the bag, flush against one side. Seal the zipper bag all the way up to the straw. Suck on the straw to draw out as much air as possible.

When the zipper bag is tightly around the slices, quickly remove the straw and complete the zipper seal immediately.

Sometimes, air can escape, but you can repeat the process and try again. This technique can take some practice, but when you get it down, it creates a nice airtight seal without the specialized equipment.

If you are not using the apple slices immediately, consider putting them in a bowl or container, fill it with water, and cover it with plastic wrap or a lid.

Make sure the apples are fully submerged in water. They will float to the top, so I like using a small plate to weigh them down before covering them.

Coat With Lemon Or Orange Juice

Lemon juice and orange juice contain citric acid that slows the process of browning. If you have a spray bottle, giving the slices a spritz works.

You can easily squeeze a slice of lemon or orange onto the apples as well, or apply either juice with your finger or a paper towel. The key is to cover the fleshy parts of the apple with the juice.

Note that this will impart some flavor to the slices, but that’s usually not a bad thing, and they go quite well together!

What is the best knife to cut an apple with?

I like to use a sharp chef’s knife, but smaller knives like paring knives, or even steak knives do the job.

How do you cut an apple without cutting it in half?

You can cut an apple without cutting it in half by making four cuts around the apple, just outside the core.

Should apples be peeled for apple pie?

Peeling apples for apple pie isn’t necessary, and it does reduce nutrients like vitamin K, vitamin A, vitamin C, calcium, potassium and fiber. However, the texture of peels in apple pie can be hard, touch, and chewy.