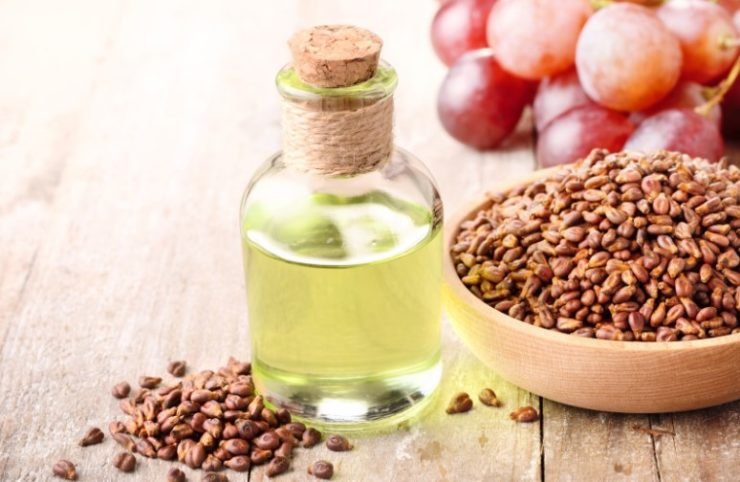 You may not think of grapes as being a good source of oil. But the seeds can be pressed to make one of the best cooking oils around.

Grape seeds are small and it takes a lot of them to make oil. Luckily, we (humans) like to drink wine, and grapeseed oil is largely a by-product of the wine industry.

Grapeseed oil has an incredibly clean, and light taste, as well as a high smoke point of 420 F. It may not be a common household staple, but it’s the do-it-all oil in many top restaurants.

If you come across a recipe that calls for grapeseed oil and you don’t have it, don’t fear. Here are 7 grapeseed oil substitutes that will fill in nicely.

Canola oil is pressed from rapeseeds, so with just one letter different from grapeseed, it must be a good substitute, right?

While it doesn’t have anything to do with the name, canola oil is in fact one of the best substitutes, for a few different reasons.

First, it has similar cooking characteristics. The smoke point is 400 F, which isn’t quite as high as grapeseed’s 420 F, but those 20 degrees aren’t going to make much difference.

Second, it has a very neutral flavor. I do think that grapeseed oil has a cleaner, flavorless taste, but canola is perfectly passable in almost any situation.

Lastly, canola oil is one of the easiest oils to find, and one of the least expensive. Put everything together and canola oil does everything grapeseed oil does, just not quite as well. Nonetheless, it’s a perfect backup option that’s easy to get your hands on.

Safflower oil is made from the seeds of the safflower plant, a relative of the sunflower. This is actually my preferred grapeseed oil substitute. But, since it’s not as readily available and a bit more expensive than canola oil, it had to take the second seat.

Safflower oil has a very neutral flavor and an impressively high smoke point of 510 F. That makes it a great option for raw uses like salad dressing, as well as for high heat stir-frying and searing.

Sunflower oil is pressed from sunflower seeds, and has a lot of similar characteristics to safflower oil. The one big difference is that it has a slightly lower smoke point. But, 450 F is still high enough for just about any use, and even higher than grapeseed oil itself.

This is a good substitute, and all-around oil that can be used raw or for high heat cooking. Plus, it tends to be a little less expensive than its safflower cousin.

Rice bran oil is made from the hard outer layer of brown rice grains. This isn’t the most common household cooking oil, but it’s widely used in the restaurant industry.

This is another nearly flavorless oil that can be used in dressings or for high heat applications. All the way up to 490 F.

Rice bran oil is my go-to when it comes to deep-frying. But, for some reason, it can be hard to find and the price is often marked up in traditional grocery stores.

Pro Tip: If you want to try using rice bran oil for deep frying, take a trip to your local restaurant supply store. You’ll likely find it there in bulk for a fraction of the price.

Avocado oil is made from the actual pulp of the avocado rather than a seed, like many other oils. It’s an excellent grapeseed oil substitute but it has more of its own flavor than the last few options.

Avocado oil has an incredibly high smoke of 520 F. That’s higher than just about any other oil around, which makes it a great cooking oil. And, if you don’t mind a little avocado flavor, this is also a great choice for dressings and other raw applications.

This oil used to be hard to find, but it’s really exploded on the food scene and can be found in just about any major grocery store. But, as avocados themselves are relatively expensive, so too is the oil.

I think almost everyone knows about olive oil. But it’s often the extra virgin stuff that comes to mind. Now, that’s one of the best oils to keep around in general, but its low smoke point makes it a poor cooking oil.

Enter light olive oil. This is still made entirely from olives, it’s just been more refined. That brings down the flavor and raises the smoke point from around 350 F all the way up to around 450 F.

Light olive oil still has an olive-y flavor to it but it’s much milder. That makes it a solid all-around oil and a great grapeseed alternative.

Peanut oil is made from lightly roasted peanuts. And because they are roasted before being pressed, the oil has a delicious, toasty, nutty flavor.

So, if you want a real flavorless option, this isn’t your best bet. But, it’s an oil that’s perfectly suited to high heat (up to 450 F) Asian stir-fries. Especially when it’s a recipe that will be garnished with peanuts themselves. Think pad thai or kung pao.

Peanut oil is also an excellent choice for deep frying, but it’s another option that can be on the expensive side.

There are a lot of good grapeseed oil alternatives that are easy to find and easy to substitute. Any of the options above can be used in equal amounts, and they all have a smoke point that’s close to or even higher than grapeseed oil itself.

Peanut, avocado, and light olive oil are the only ones that you’ll have to worry about the flavor affecting your recipe. But, even those are fairly mild and should be just fine as a substitute in most situations.

Can I Use Olive Oil Instead Of Grapeseed Oil?

Light olive oil is a good grapeseed oil substitute in most recipes. Extra virgin olive oil on the other hand is not a great substitute because it has a stronger flavor as well as a much lower smoke point.

Is Grapeseed Oil And Canola Oil The Same Thing?

Can You Substitute Grapeseed Oil In Baking?

Yes, grapeseed oil can be used as a substitute in equal amounts for any other neutral-flavored oil in baking.