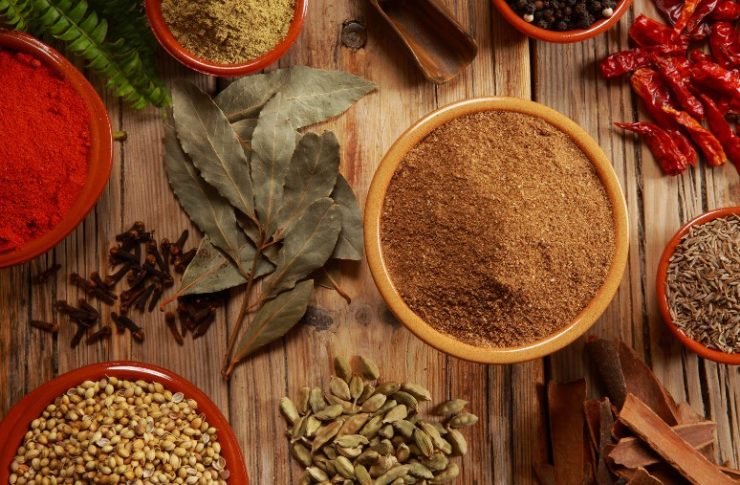 I’m convinced there is no greater delicacy in life than a hot bowl of Chicken Tikka Masala with a heaping pile of Garlic Naan on the side. That might seem dramatic, but it’s my all-time favorite dish, and I make it at home more often than I’d like to admit.

I’ve definitely reached into my spice cabinet only to realize I used the last of my coveted garam masala. But there’s no way that could stop me from kicking my tikka masala craving. And along the way, I’ve figured out numerous tasty substitutions.

“Masala” directly translates to “spice blend,” so most of our swaps will be just that: a blend of different aromatic spices. Authentic garam masala can have over 20 warming spices toasted and ground together.

It would be an incredible undertaking to try and create traditional garam masala from scratch. Luckily, a few spice combinations (with far fewer than 20 ingredients) will get us pretty close to the real thing.

6 Swaps For Garam Masala & How To Use Them

Curry powder isn’t a perfect substitute for garam masala, but it’s a convenient one that many people already have in their pantry.

Invented by the British, curry powder is definitely not authentic Indian. However, England’s national dish is Chicken Tikka Masala, so they’ve definitely won my trust in this department.

Turmeric and ginger aren’t normally included in garam masala, and curry is missing warm spices like cinnamon, nutmeg, and clove. However, this is a great starting point for a substitution.

If you also have spices like coriander, cardamom, cinnamon, nutmeg, or clove, you can add those as well for an even closer swap.

Substitute curry powder for garam masala at a 1:1 ratio in any dish.

As you’ll notice, cumin is our shining star in all spice combinations. It’s rich and hearty, earthy and warm, with an edge of bright citrus, and it’s imperative for a passable garam masala substitute.

Allspice has a very warm aromatic flavor that’s similar to what you would get from cinnamon, nutmeg, or clove. So when you combine cumin and allspice, you can get pretty close to the depth of garam masala without a laundry list of additional spices.

To create this blend, substitute garam masala with a mix of 1 part cumin and ¼ part allspice.

Let’s kick it up a notch and get even closer to the real thing. As always, start with cumin. It’s essential to achieve a depth of flavor similar to what you’d find in garam masala.

From there, add coriander seeds, which are earthy, tart, and slightly sweet.

Next, cardamom. It has an herbal flavor, with a heat you’ll recognize from eucalyptus or mint, like a cooling warmth.

This trifecta of spices makes up a large portion of a garam masala blend. So in a pinch, you can use these to get close to the flavor you’re aiming for.

For this swap, you’ll want to use a mix of 1 part cumin, 2 parts coriander, and a 1/2 part cardamom in place of garam masala in your recipe.

This garam masala alternative is my personal favorite, and is a formula that you can use to plug in whatever spices you already have on hand.

I like to go a bit heavier with the coriander for this blend because its sweetness cuts all the heat from the warming spices we will be incorporating.

Then, we can’t forget the cumin. As I mentioned earlier, it is essential when trying to land the flavor of authentic garam masala.

The next addition is black pepper. This is an ingredient that almost everyone has in their cabinet that will take your spice blend to the next level. It has a piney, citrusy flavor and intermingles beautifully with our other aromatics to get us closer to a garam masala taste.

Finally, include whatever warming spice you have in your cabinet. Warming spices in garam masala include cinnamon, cloves, nutmeg, and cardamom.

To go a step further, blend all the warming spices you have in your cabinet to bring a more complex depth of flavor to your dish.

Pumpkin spice includes ginger which isn’t customarily incorporated into garam masala. But when combined with these other warming spices, you’ll hardly notice the addition. Plus, it’s something most of us have shoved way back in our spice cabinets from a Thanksgiving long ago.

You could swap just the pumpkin spice for garam masala in a recipe, but the outcome will be much sweeter. To cut the sweetness, add cumin, coriander, and black pepper to create an earthy, warming flavor that will bring your dish much closer to a garam masala flavor.

For this alternative, swap garam masala for a mix of 1 part pumpkin spice seasoning, and ¼ part each of cumin, coriander, and black pepper.

There are some spicier inclusions in ras el hanout, but the depth of flavor it achieves will land your dish pretty close to authentic garam masala.

I know this isn’t a common ingredient that everyone will have in their spice cabinet, but the flavor is similar enough to garam masala that it’s worth mentioning.

When deciding which substitute to use, there isn’t a certain dish where one spice blend will better serve you over another. So identify which ones you have on hand and choose your garam masala alternative from there.

Additionally, anytime black pepper is called for, use freshly cracked peppercorns rather than pre-ground whenever possible. You’ll incorporate much more heat and flavor into your dish.

And if you have an extra couple of minutes and want to punch up the flavor of your dish, start with whole seeds and pods rather than powders, then toast and grind the spices yourself.

First, toast them in a heavy-bottomed skillet until they are warm and fragrant, moving them constantly, so they don’t burn. Then, once cooled, blitz them up in a clean coffee grinder or use a mortar and pestle to grind them.

You’ll notice the flavors intensify tenfold when you take these simple extra steps.

What’s the difference between garam masala and tikka masala?

Garam masala is a spice blend incorporated into the sauce of tikka masala. “Tikka” refers to grilled or roasted meat, whereas “masala” refers to the spice blend that permeates the mouthwatering sauce of the dish.

Is garam masala the same thing as curry powder?

Both spices flavor and add color to a myriad of dishes. However, curry powder includes turmeric, which adds a vibrant yellow hue to a dish. Garam masala doesn’t use turmeric but instead features a blend of warming spices that are otherwise missing from curry powder.

Can I use cumin instead of garam masala?

If you’re all out of garam masala, cumin is a great alternative to incorporate into your dish. But don’t stop there. If you have any on hand, add some allspice, coriander, cardamom, and black pepper to make a better substitution.