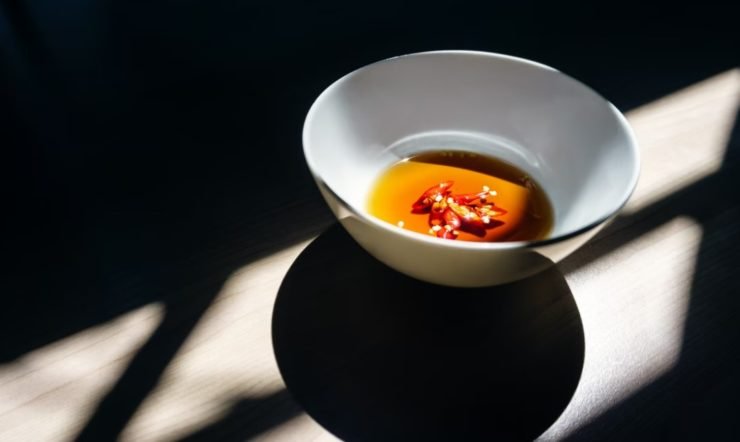 This fermented, salty sauce is made with anchovies or krill as the primary ingredient. That gives this condiment a delightfully funky and savory taste.

Fish sauce is very common in Southeast Asian cuisines, but it’s a versatile ingredient that can enhance anything from salad dressings and dipping sauces to soups and stews. While no substitute can exactly match its complex umami flavor, numerous options can come close.

If you’re allergic to shellfish, don’t eat fish, or just can’t find the stuff where you live, you’ve come to the right place. This list has you covered with 9 great substitutes, most of which are even vegan-friendly.

Regular soy sauce, also known as shoyu, is a great stand-in for fish sauce. Give it a try in pad thai, stir-fries, curries, salad dressings, meat dishes, and dipping sauces.

Since soy sauce is so readily available, it’s an easy switch and can be used as a 1:1 swap. Its flavor doesn’t have quite the same rich complexity as fish sauce, but it still serves well in a pinch.

Keep in mind that soy sauce is very high in sodium, so you may want to dilute it or use the low-sodium kind for dipping sauces and salad dressings.

Here are a few other ways you can use soy sauce with secondary ingredients to get a little closer to the real thing:

This combination is best for stir-fries, curries, and soups. For every 1 tablespoon of soy sauce, add 1 minced anchovy filet for a more fishy, funky flavor. Use this combination at a 1:1 ratio for fish sauce.

This mixture is good for any application. Create a rich mushroom broth and season to taste with soy sauce. Or seek out mushroom soy sauce, which is available at many Asian grocery stores and online.

Mushroom broth will require a 2:1 ratio, and mushroom soy sauce can be used at a 1:1 ratio in place of fish sauce.

Best for curries, pad thai, stir-fries, dipping sauces, and soups. Mix equal parts soy sauce and a light vinegar such as rice vinegar, then add a touch of salt to taste.

You can also use lime juice in place of vinegar for a slightly different flavor. Once mixed, this can be used as a 1:1 substitute for fish sauce.

Pro Tip: Try tamari instead of soy sauce if you need to avoid wheat. To avoid both wheat and soy, try coconut aminos.

Tamari contains miso paste, which has a slightly richer and more robust flavor than soy sauce. Use it as a 1:1 substitute in any fish sauce recipe. Feel free to dilute it with a little water if you find it too salty.

Vegan fish sauce exists! It can be found commercially made, or you can make your own. Try it in any recipe that calls for fish sauce, as the taste is nearly identical.

Now your results may vary with vegan fish sauce since each recipe and pre-packaged version will contain some different ingredients.

Usually, they’ll contain seaweed, soy sauce, vinegar, and something with extra umami flavor like miso, mushroom, or another fermented product.

Substitute vegan fish sauce at a 1:1 ratio for fish sauce. Considering how different brands and recipes vary, I’d recommend giving it a quick taste test before you decide how much to use.

This salty-sweet sauce works in most dishes, including pad thai, curries, salad dressing, dipping sauces, and soups. Coconut aminos can be a fantastic vegan, wheat-free substitute for fish sauce.

Made from fermented coconut sap, coconut aminos are lightly sweet. The sauce’s sweetness is balanced by a tasty hint of umami flavor.

If coconut aminos are too sweet for your taste, try adding a dash of salt or soy sauce. Otherwise, use it at a 1:1 ratio to replace fish sauce.

Worcester sauce is a useful fish sauce substitute for stir-fries, meats, and dipping sauces. This may sound like an odd replacement at first, but hear me out.

Because this English sauce contains anchovies and is also aged like fish sauce, it has certain flavors that make it a fine substitute.

Worcester sauce does include other flavors that fish sauce doesn’t, though, such as onion, garlic, and tamarind. It tastes sweeter and has a thicker consistency, too.

Try it as a 1:1 substitute, or add a splash of water to thin it out before using it.

Oyster sauce comes close to the taste of fish sauce when used in stir-fries, pad thai, and meat dishes.

This shellfish-based sauce’s fishy, salty flavors make it an excellent substitute. But you’ll want to remember that it’s markedly sweeter and thicker than fish sauce, so plan accordingly.

Oyster sauce can be substituted at a 1:1 ratio. It’s also okay to thin it out with a little water to change the consistency or mellow out the sweetness.

Wakame seaweed can be powdered to add fishy, umami flavor to your recipes. Give it a try in any recipe that calls for fish sauce.

This seaweed is an ingredient usually included in vegan fish sauce recipes. It brings that pleasant fishy flavor of the sea.

Be aware, however, that it’s a deep, dark green color. Consider if that color will work in your recipe or if it will change it more than you’d like.

To use wakame, combine the powdered version with a touch of vinegar and salt for the closest flavor to real fish sauce. Because it’s strong in powdered form, it’s best to start small and add it to taste.

Pro Tip: If you can’t find powdered wakame, make your own. Grind pieces of whole, dried wakame in a spice grinder or high-speed blender until it’s a fine powder. Be careful to let the fine powder settle completely before opening the lid to avoid inhaling the stuff.

Fresh seaweed can be used to emulate fish sauce in soups, broths, salads, and sauces. Some types of seaweed to try include nori, wakame, and kombu.

Seaweed can be bought fresh or dried and rehydrated (which is more common). Each type of seaweed usually has unique instructions for how to best hydrate and use it.

Here are some of the best seaweeds for common dishes:

Fresh seaweeds will alter the appearance and texture of your dishes if they’re used as a fish sauce substitute. However, the taste and extra minerals could be worth it.

Fish broth can serve as a replacement for fish sauce in soups and other dishes where extra liquid won’t be a problem.

This broth will usually be made from a mixture of whole fish or fish heads, along with bones and scraps. Saltwater fish are usually best for fish broth, like sole, snapper, cod, and flounder.

If you want a very special and rich fish broth, try making it with salmon as the Alaskans and Nordics do. Whichever type of fish you use, you’ll ideally want to flavor it with herbs and celery, onion, or carrot.

To use fish broth in place of fish sauce, use double the amount that’s called for in your recipe.

When selecting the ideal substitute for fish sauce in your recipe, consider these factors for the best results.

The thickness of your sauce will impact the texture and liquid content of your dish. For this reason, you wouldn’t want to use fish broth in a drier recipe like pad thai, since you’d have to use twice as much to emulate the flavor of fish sauce.

How strong is the umami flavor in your substitute? And does it have additional flavors that fish sauce doesn’t, like onion or tamarind? Will those flavors meld or clash with your dish? These are helpful questions to ask when substituting fish sauce.

Finally, take note of the appearance of the replacement you’re using and ensure it won’t alter your dish in an undesirable way. Once you’ve checked these things, you should have a top-notch fish sauce substitute for your recipe.

Vegan fish sauce is commercially available or can be made at home using many online recipes. But if you need a quick substitute in a pinch, a splash of soy sauce can get you by.

Can I use soy sauce instead of fish sauce?

Yes, soy sauce can be used at a 1:1 ratio in place of fish sauce. Its flavor isn’t quite as complex, but it’s still a great substitute that’s widely available.

What’s the best substitute for fish sauce in curry?

Depending on the type of curry you’re making, soy sauce or vegan fish sauce are your best bets to replace real fish sauce.