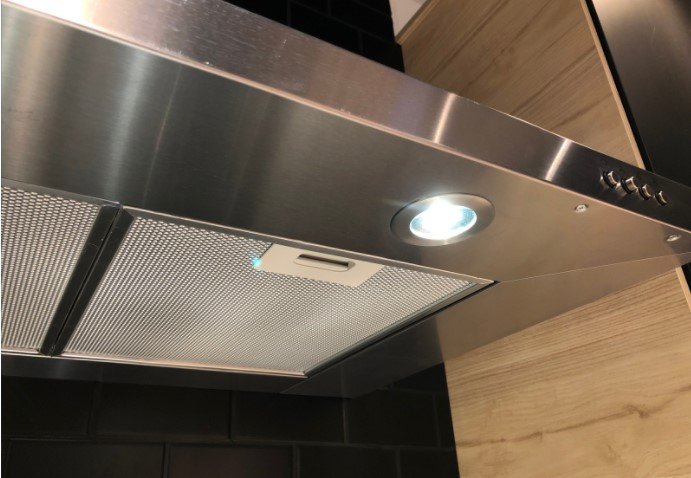 Range hoods are used to keep your kitchen air clean and smoke-free.

One way they do that is by sucking up air and removing it from the room through an outside vent. But, that’s not the only option.

Enter the ductless range hood. These hoods don’t have to connect to an outside vent. Instead, they clean the air in your kitchen using charcoal or carbon filters.

So, now that you know there is an option that doesn’t have to be vented outside, let’s break down how they work. I’ll break down the tradeoffs between ducted and ductless models, and share a few of the key factors you should consider when deciding which is right for your situation.

Can You Install A Range Hood Without An Outside Vent?

While an outside venting hood may offer the best kitchen ventilation, it’s certainly not required. Range hoods that don’t vent to the outside are generally referred to as “ductless,” or “recirculating” hoods.

Ductless range hoods don’t rely on any outside vent or ductwork, which means they can be installed and used in any home or apartment. They can simply be mounted to a wall, the ceiling, or under a cabinet, and you’re all set.

No additional construction or costs required.

So where does all of the smoke and fumes go if they’re not sent outside?

Ductless range hoods rely on carbon filters to clean contaminated air before recirculating it back into the room.

Ducted vs. Ductless Hoods: Why Choose One Over The Other?

So we’ve covered the fact that you don’t have to vent a kitchen hood outside. And, those ductless hoods are compatible in any home and with any kitchen layout.

Well before you get too excited, let’s talk about the performance differences and why you might choose one over the other.

While ductless hoods keep your kitchen air clean by filtering and recirculating the air, ducted models take smoke and other cooking fumes and send them outside. Sucking up and physically removing contaminated air from the kitchen is much more efficient and effective.

Simply put, a ducted hood will remove air much faster than a ductless hood can clean it. Ultimately, leaving the air you breathe cleaner.

The only real downside to a ducted hood is actually installing the ductwork and outside vent.

If ducting isn’t already installed, it can be an expensive project to add it.

While the initial investment might be high, ducted hoods generally require very little maintenance and little to no ongoing costs.

Ductless hoods on the other hand are usually less expensive upfront, but you will have to continue to replace the filters for the life of the hood. And that can quickly add up if you’re replacing them every few months.

If you already have the ductwork in place, definitely take advantage and go with a ducted hood. If not, there are some circumstances where a ductless model might suit you just fine.

If you only cook a couple of times a week, and you’re not doing much high heat cooking, grilling, or deep-frying, a ductless hood can probably handle the job. This is especially true if you’re cooking on an electric or induction cooktop.

Unlike gas ranges, electric stoves don’t produce as much heat and you don’t have to worry about the fumes from burning gas.

Ductless range hoods can also be a good option in apartments and condos where installing ductwork might not be an option at all.

On the flip side, if you cook more than a few times a week, or do a lot of high-heat searing, sauteing, and stir-frying, you’ll definitely benefit from a hood that vents outside. And especially if you’re working with a gas range.

Can You Convert An Existing Range Hood From Ductless To Ducted?

Yes, it is possible to convert an existing range hood from ductless to ducted, but only sometimes.

Some ductless hoods don’t have any type of exhaust port where you would be able to connect them to a duct that runs outside. These models are ductless only.

Other recirculating hoods have a place to hold disposable filters but also feature an exhaust port to connect to a duct. These are known as convertible hoods and they can be used ducted or ductless.

Some convertible hoods will simply have an opening that can be connected to a duct at any time. While others will have removable panels that you will have to take off before connecting them to an outside vent.

Installing Ductwork And An Outside Vent

The difficulty and cost of installing ductwork will depend largely on the layout of your house.

The goal is to find the shortest unobstructed path from above your range to the outside of the house. If your cooktop shares a wall with the outside, the process can be about as simple as drilling a large hole in the wall and placing a metal duct through.

However, if your kitchen is located in the middle of your house, you may have to run long lengths of duct with twists and turns to get outside. And that’s when installation can get complicated and more expensive.

It’s difficult to estimate how much this type of project will cost because home layouts are so different. But, you should be able to get an idea of how complicated the job will be by mapping out a route from the stove to the outside of your home.

The shorter the distance the better, in both cost and how effective your hood will be once it’s up and running.

Am I Better Off With A Ductless Hood Or No Hood At All?

Any range hood is better than no range hood at all. While a ducted model may be ideal, ductless hoods can still be a very effective ventilation solution.

Even though they recirculate air into the kitchen, the carbon filters can do a solid job of neutralizing smoke and odors. And, they do a great job trapping grease so that it doesn’t end up in the air you breathe or creating a film on all of your kitchen surfaces.

If you are going this route, be sure to check out our roundup of the best ductless hoods around. There are options for any budget, plus some convertible models that you can use now and if you decide to install an outside vent sometime down the line.

Do Range Hoods Have To Vent Outside?

No, ductless or recirculating range hoods do not have to vent outside. These hoods work by filtering air through a carbon filter before recirculating it back into the room.

Is A Ducted Or Ductless Hood Better?

Ducted hoods are more effective and efficient when it comes to keeping your kitchen air clean. They can remove contaminated air better and faster than a ducted hood can clean it.

Do I Need A Range Hood In My Kitchen?

Any range hood is better than none at all. Range hoods keep the air you breathe cleaner and can make for a more pleasant and safer cooking experience. Ductless hoods can be a quick and inexpensive solution if you don’t have a hood or ductwork in place.