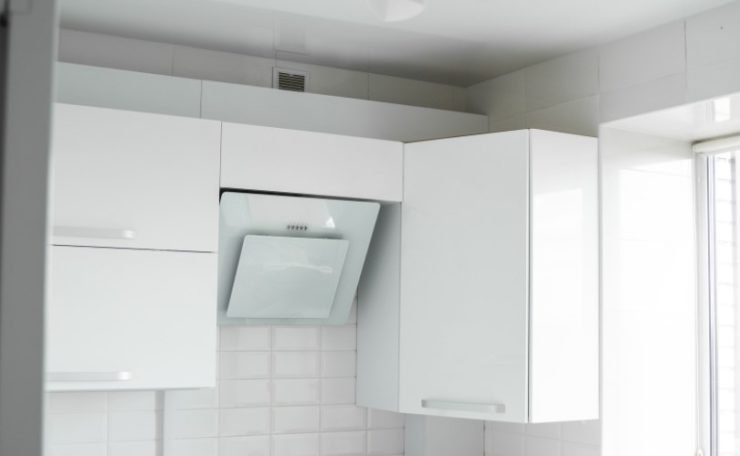 Do you actually need a range hood?

It depends, but in most cases ‘yes,’ you do.

Cooking in a professional kitchen for over a decade gave me a great appreciation for the benefits of good ventilation. It also helped me understand how air filtration could translate into more effective cooking at home.

In this article, I’ll break down how range hoods work and what makes them a valuable, if underappreciated, kitchen tool. I’ll also point out the make-or-break factors you should have in mind when deciding if a range hood is right for your situation.

What do range hoods actually do?

I think the first step to deciding if you need a range hood or not is to understand how they work and why we use them.

A range hood is a pretty simple machine.

Essentially, it’s just a fan that’s mounted above your cooktop. But instead of blowing air down towards the stove, it’s sucking air up and away.

When you cook, you’re producing heat, fumes from gas (if you have a gas range), smoke, steam, and odors, just to name a few. All of that enters the air and spreads throughout the house and we breathe it into our lungs.

And this is true no matter what and how often you cook.

Regardless if you cook once a week or every day, only over low heat or with a screaming hot grill pan. So, a hood is there to suck up all of that contaminated cooking air before it escapes into the air around us.

There have been several occasions working in a professional kitchen when the hood shut off mid-service. And in a matter of seconds, you can feel the temperature rise and see the room filling with smoke.

Now, most of us aren’t producing those same levels of heat and fumes, but it’s always an easy and astonishing way to see how important a range hood is. In fact, when that does happen, it often means the end of service as most cooking equipment has to be shut down immediately.

Not Convinced You Need One?

Ok, what if I told you that a range hood will actually help keep your kitchen clean. Not just the air, but the surfaces, appliances, floors…everything.

Even though you may not be able to see it, just about every time you cook, small oil particles are sent up into the air where they float along until they land on any and every surface.

Over time, you can end up with a sticky film of oil on things that you don’t regularly use and areas that may be out of reach for regular cleaning. Places like walls, ceilings, on top of the fridge, and cupboards are all prime real estate for a nice coating of grease (pleasant, I know).

Luckily, this is a fate easily avoided. Range hoods are excellent at capturing those tiny oil splatters before they can journey out and make a nice home on any of the surfaces in your kitchen.

Ducted vs Ductless: Which Is Better?

So, a hood is basically just a fan mounted above your stovetop. But there’s another important part to the equation, and that’s where all the contaminated air goes once it’s sucked up.

There are two options here, ducted and ductless range hoods. Ducted hoods are connected to a duct that leads to an outside vent. These suck up air and physically remove it from the room through that outside vent.

Ductless models are self-contained units, not connected to any ductwork or outside vent. Instead, these suck up contaminated air and pass it through a carbon or charcoal filter. As the air passes through, the carbon neutralizes smoke, fumes, and odors before recirculating the “clean” air back into the room.

In general, ducted models are more efficient and effective at keeping your kitchen air clean. But, they do require a duct and outside vent in order to operate.

Since ductless models aren’t connected to the outside, they can easily be mounted and used in any room. So while they may not be as effective, they’re much better than no hood at all and can be a quick and inexpensive solution.

How To Pick The Best Range Hood

While choosing between a ducted or ductless ventilation system is one important decision, there are a lot of other factors that go into picking the best option.

First, you’ll need to understand what type of range hood fits the layout of your kitchen.

While under-cabinet and wall mount hoods are incredibly popular, that simply won’t work if you’re trying to affix it above a kitchen island. Always design with your space in mind.

You’ll also need to look at the size and output of your stove-top to understand how much power you really need to get the job done.

More power often equates to more noise, so if a conversational ambiance is important to you consider looking into quieter hoods. You may spend a bit more to cut down on noise, but in my experience it’s no fun trying to carry a conversation or listen to music when your hood sounds like a jet engine every time you turn it on.

Is It Safe To Cook Without A Range Hood?

What Size Range Hood Do I Need?

A range hood should be at least as wide as your cooktop. But to get the best performance, a hood should be 6-inches wider than your stove. The extra overhang on each side will allow the hood to capture and remove more contaminated air before it escapes into your kitchen.

Do I Need A Range Hood If I Have An Electric Stove?

Yes, you should still use a range hood if you cook over an electric or induction stove. Even though electric stoves put off less heat and fumes than gas ones, a hood is still essential to remove the grease, smoke, and other fumes produced as you cook.