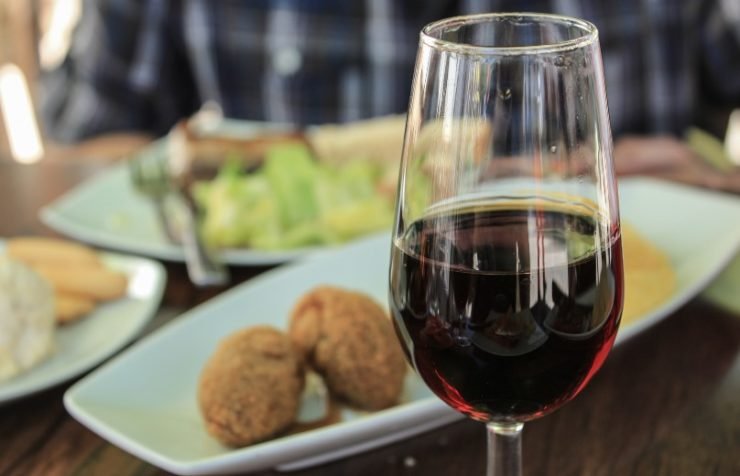 If you’ve ever cooked with sherry before, you’ll understand just why it is so common and sought after in many classic dishes and otherwise. When incorporated into a recipe, sherry imparts a nutty, almost spiced depth of flavor.

But what if you’re halfway through cooking a meal and realize you’re all out of cooking sherry? How could you possibly finish the dish when you’re missing such a critical component?

Fortunately, it’s possible, and you probably already have a couple of convincing cooking sherry substitutes in your pantry.

I learned some of these alternatives in culinary school, and others came from experience in professional kitchens. I’ll share with you 7 different substitutions for cooking sherry, and we’ll go over when and how to use each.

This swap may seem like a no-brainer, but it’s definitely worth mentioning. Both cooking sherry and drinking sherry are fortified grape wines. That means they have distilled alcohol added to them to make them last longer.

Cooking sherry goes a step further and includes additives to further extend the shelf life even longer. The main preservative used is a type of sodium, so cooking sherry is much saltier than the stuff you want to drink.

And because of these additives, many prefer the taste of regular dry sherry in their recipes anyway.

Since cooking sherry doesn’t come in dry or sweet varieties, if your recipe calls for “cooking sherry,” your best bet is to use dry sherry.

With the considerable amount of salt added to cooking sherry, its taste leans more dry than sweet. And when it comes to dishes with poultry or citrus, dry sherry is your best bet.

However, if your dish has red meat, pork, or tomatoes, sweet sherry can highlight those flavors and would be a great option.

Whether you reach for dry or sweet sherry, you’ll still swap it for cooking sherry at a 1:1 ratio.

Since brandy is added to sherry to increase its alcohol content and shelf life, using it as a substitute makes a lot of sense.

Brandy will work in all recipes that call for cooking sherry, but it’s an especially good choice for dishes with a long cook time.

Brandy has a much higher alcohol content than sherry, so you’ll want to ensure the dish has a long enough cooking time in order to cook off the excess alcohol.

Braised dishes that cook for upwards of an hour won’t need much adjustment. However, if you plan to simmer the brandy in a sauce on the stovetop, you should add at least 10 minutes to your original cook time.

When going this route, always opt for an unflavored brandy to avoid interfering with the recipe’s flavor profile.

To swap brandy for cooking wine, decrease the necessary amount by ¼ and add additional time to cook off excess alcohol.

Two great options are a dry fortified wine like a dry Madeira or Marsala. You can even find these wines in “cooking” and “drinking” varieties, like sherry. Of course, using one of these will change the nuanced flavors of the dish, but in the end, you’ll have a delicious wine-y taste.

Otherwise, use whatever dry white wine you have on hand. Sauvignon blanc, pinot grigio, pinot blanc, and semillon are all excellent options. Reach for these if your recipe features poultry or citrusy notes.

Whatever dry wine you opt for, you can swap it at a 1:1 ratio for cooking sherry.

You can use sweet wines in place of sweet sherry in recipes. We’ve already discussed how cooking sherry is more similar to dry than sweet sherry. But, a sweet alternative can enliven your dish even further in certain cases.

If your recipe calls for red meat, pork, mushrooms, or tomatoes, a sweet wine will enhance these ingredients. Think red sauces, dark gravies, braises, and roasts. Recipes like these just beg for that extra sweetness.

You could use fortified sweet wines like port, sweet Madeira, and sweet marsala. Otherwise, opt for complex sweet red wines like cabernet sauvignon, merlot, or malbec.

Like our previous alternatives, substitute cooking sherry for sweet wines at a 1:1 ratio.

Dry vermouth doesn’t have to be just that “other” ingredient in a martini. It’s a fortified wine similar to sherry and can make a spectacular alternative if you’re in a pinch. So much so that it deserves its own section separate from other wine substitutions.

Vermouth carries the flavor of herbs and spices and is also fortified with brandy. Sherry is prepared the same way, making this an almost perfect alternative.

No matter what recipe you are preparing, dry vermouth will seamlessly replicate cooking sherry in all dishes.

Substitute cooking sherry in equal parts for vermouth, and you probably won’t even notice the difference in your finished dish.

Try chicken stock with lemon if you’re looking for a non-alcoholic alternative to cooking sherry. Of course, the taste won’t be exactly the same, but you’ll end up with a flavorful dish.

Chicken stock doesn’t have the same complexity as cooking sherry, but it will still add great depth of flavor no matter what you’re making.

The lemon juice will brighten the recipe and bring complexity to the dish, similar to what sherry would accomplish in a recipe.

Simply swap cooking sherry for equal parts chicken stock and half a lemon’s worth of juice (about 2 tablespoons) per 16 oz stock. And if you only have chicken broth on hand, you can still use that just the same.

Another non-alcoholic substitution for cooking sherry, this time with a bit more of a kick, is vinegar. More specifically, wine-based vinegars or apple cider vinegar.

Vinegar will replicate the tang of alcohol in a recipe and offers a more complex flavor than stock with lemon.

There are a few different types of wine vinegar that you can use for this swap. Of course, sherry vinegar is the number one choice, but white and red wine vinegar also works great. Or, you could use apple cider vinegar for a very similar effect.

This alternative is best when substituting small amounts of cooking sherry, about 2 tablespoons or less. Vinegar has a robust flavor, and in large quantities, that flavor can veer toward astringent.

If the recipe calls for more than 2 tablespoons of cooking sherry, you’ll have to dilute the vinegar before adding it to your dish.

When substituting vinegar for less than 2 tablespoons of cooking sherry, you can swap them in equal parts.

When swapping more than 2 tablespoons of cooking sherry with vinegar, use a mixture of equal parts vinegar and water. If you’d like to replicate a sweet sherry, add a touch of sugar to the mixture.

When deciding which substitution is best for your dish, start by determining if you want to use a non-alcoholic or alcoholic alternative.

If you’re looking for a non-alcoholic alternative, stock or vinegar will be your go-tos.

Vinegars will work well if you only need to swap out 2 tablespoons or less of cooking sherry. But if you need to substitute a larger amount, using chicken stock might be a better option.

If you’re going to use an alcoholic substitution, know that you can use drinking sherry, brandy, or dry vermouth in equal amounts with great success.

Is cooking sherry dry or sweet?

Drinking sherry comes in either dry or sweet variations, but you won’t see this variation carry over into cooking sherry. With the considerable amount of salt added to cooking sherry, its taste leans more dry than sweet.

Can I use brandy instead of sherry?

Yes, you can use brandy in place of sherry. Just make sure to choose an unflavored brandy so as not to disrupt the recipe’s flavors, and cook the dish for longer to cook off the extra alcohol.

Can you drink cooking sherry?

You won’t want to use cooking sherry for any drink applications. An excess amount of salt is incorporated into cooking sherry to extend its shelf life, so it’s only suitable for cooking, not drinking.