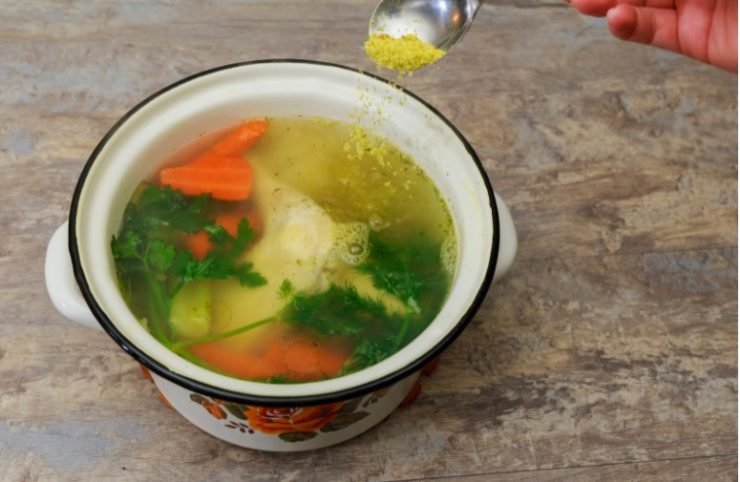 Chicken broth is a great way to add flavor and richness to soups, sauces, grains, and braises. It’s actually one of the “secret ingredients” we use in professional kitchens that make things taste just a tiny bit better than when made at home.

But, if you run out, don’t have any on hand, or want to keep a recipe vegetarian, all is not lost.

After over a decade of professional cooking, I think I can legally put “expert ingredient substituter” on my resume, right? So, stick around to learn my 9 favorite chicken broth substitutes and when to use them.

What Can I Substitute For Chicken Broth?

Vegetable stock can be made from any number of different vegetables and herbs. But it will generally have all the same flavors as chicken stock, minus the chicken.

But when you’re making your own, feel free to add other vegetables and herbs. Things like mushrooms, tomatoes, and leeks are just a few great additions. Avoid brassicas and cruciferous vegetables like cabbage, broccoli, mustards, and other leafy greens that are high in sulfur compounds.

Mushroom broth is technically another form of vegetable stock. But using primarily mushrooms results in a broth that’s rich, meaty, and full of umami, yet still vegetarian.

Depending on the broth you buy or the mushrooms you use to make your own, mushroom broth will often be much darker than chicken stock.

In a lot of cases, the color won’t make a difference. But if making something like gravy that’s 99% mushroom broth, you’ll definitely end up with a final product that’s noticeably darker.

Pro Tip: for the easiest mushroom broth possible, steep dried mushrooms in boiling water. Even though it’s just one ingredient plus water, the resulting liquid (sometimes called mushroom tea) is packed with flavor.

The obvious difference between beef and chicken broth is the protein used in each one. And while the flavors of beef and chicken are quite different, the broths can often work quite well when substituted for each other.

However, in many cases, beef broth will have a much stronger or more pronounced flavor than chicken broth. So while it’s common to use chicken broth alongside seafood and other delicate ingredients, beef broth can end up being a bit overpowering.

If you’re worried about that in your recipe, try diluting beef broth with water to make it play more nicely with the other ingredients.

Bouillon concentrate comes in cubes, powder, paste, and liquid. I’m partial to the cubes because they are individually portioned and wrapped, making them easy to store and even travel with. A great addition to your camp kitchen kit.

No matter what option you choose, simply add your concentrate of choice to hot water, and boom, instant chicken broth.

One thing to keep in mind is that many bouillon concentrates have a very high sodium content. So be sure to taste yours before adding additional seasoning.

Dashi is a Japanese stock made from kombu (dried seaweed) and bonito flakes (dried tuna). I wouldn’t necessarily call it “fishy”, but you can tell it’s made from ingredients that come from the sea.

Dashi is the base for a lot of different soups and sauces in Japanese cuisine. It pairs particularly well with seafood, but its rich umami flavor works just as well with vegetables, chicken, and pork.

Pro Tip: You should be able to find all the ingredients to make your own dashi at your local Asian market. But for beginners, the dry instant packets are a great and easy alternative to keep on hand.

Just like with dashi or mushroom stock, tomato broth is a simple (and vegetarian) way to add flavor and umami to a dish when you don’t have chicken broth on hand. Plus, this substitute only calls for one ingredient.

Along with mushrooms, parmesan cheese, and seaweed, tomatoes are one of a handful of  ingredients that are naturally loaded with glutamic acid. The amino acid responsible for the newest foundational flavor: umami.

For this, you can use fresh or canned tomatoes. Simply simmer them in water for around 20 minutes for the flavor to disperse and mellow.

While you can get naturally occurring umami from ingredients that are rich in glutamic acid, sometimes it’s easier to go straight to the source.

MSG is available in a salt-like powder and can be added to water or other broths to enhance their flavor. Plus, it adds a savory meatiness while keeping things vegan.

Wine is a great way to add flavor and complexity to a dish. And when it comes to substituting for chicken broth, white wine will usually (but not always) be the way to go.

Now, you probably don’t want to replace all of the chicken broth in a recipe with wine. Instead, use the wine to deglaze your pot or pan and allow it to cook off and reduce for several minutes before adding water or other liquids.

This will concentrate the flavor of the wine while getting rid of any harsh alcohol taste.

Pro Tip: When cooking with wine, first be sure to use a wine that you would be willing to drink. Second, try serving the dish with a glass of the same or same type of wine for a technique we call “bridging” or “echoing”.

When all else fails, or you just want to keep things as simple as possible, plain old water might be the only substitute you need.

Sure you won’t get any additional depth of flavor from water, but in many cases, you really don’t need it.

If you use water as your chicken broth substitute, you may benefit from adding more herbs or other aromatic vegetables to bolster the flavor. But for braises and soups that cook for long periods of time, you’re essentially making your own flavorful broth while you cook.

There are a lot of great chicken broth substitutes out there. Most are easy to find in grocery stores, and many can easily be made at home with just one or two ingredients.

When it comes to the most universal chicken broth substitute, you can’t really do better than vegetable stock. Even though it doesn’t have the same richness as chicken broth, it goes with everything and you don’t have to worry about dietary restrictions.

On the other hand, the more umami-rich broths like beef, mushroom, and dashi will replicate the meatiness you get from chicken broth. But, you’ll want to ensure the stronger flavors match the recipe that you’re using them in.

Can I Use Water Instead Of Chicken Broth?

You can always use water instead of chicken broth. But to make up for the flavor, you may want to add additional herbs, vegetables, or other seasonings.

What’s The Difference Between Stock And Broth?

Vegetable broth is generally the best vegetarian substitute and can be used in equal amounts and in any recipe that calls for chicken broth.