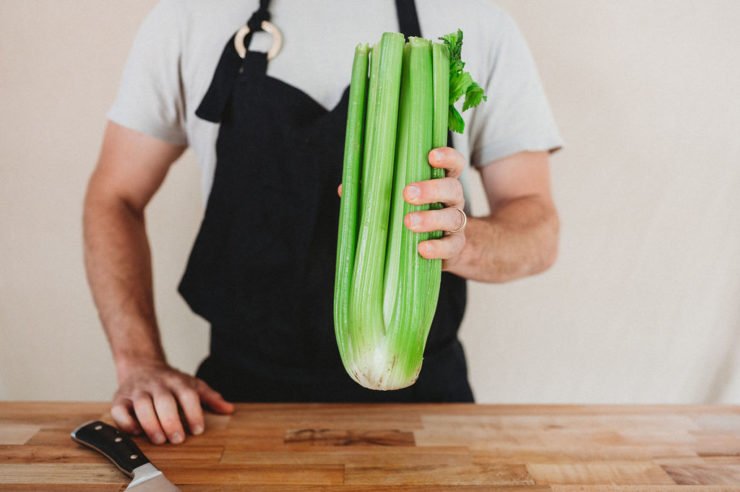 The refreshing crunch and barely-bitter flavor of celery make it a widely utilized ingredient. But if you’re fresh out or need to omit it from a recipe, no worries! It’s an easy vegetable to substitute.

Celery makes appearances in both hot and cold dishes. Its signature crunch shines in salads, especially creamy ones like potato and chicken salad.

When it comes to hot foods, celery lends more taste than texture. A classic part of mirepoix, or the “holy trinity” (celery, onions, carrots), it lends home-cooked flavor to soups, stocks, and stuffings.

No matter what dish you make, this list has a celery substitute for you. We’ll cover each option’s taste, texture, and appearance so you can pick the ideal replacement.

Bok choy is my number one pick as a celery substitute in most situations. It’s delicious in salads, stir-fries, and soups.

Sometimes referred to as “Chinese cabbage”, you can buy mature bok choy or baby bok choy, which is shorter and more tender. But, if you want that big, watery crunch of celery, full-size bok choy is the way to go.

This plant has a thick, white stalk that’s crisp, but not at all stringy like celery can be. Dark green leaves top the stalks. The whole plant can be eaten raw or lightly cooked. With its mild flavor, it can substitute celery in almost any dish.

While it has a more subdued flavor than celery, the texture and water content come very close.

Pro Tip: If you’re cooking both the leaves and stalks of bok choy together, add the stalks before the leaves since they cook much faster.

Green onions, or scallions, can replace celery in green salads, potato and tuna salads, and stir-fries.

Scallions mimic the crunch of celery quite well, especially the white sections. However, the flavor isn’t an exact match, since they provide a mild onion flavor.

Because they’re more pungent than celery, it’s best to use half the amount of green onion for the full amount of celery called for in your recipe.

Carrots can be a perfect 1:1 substitute for celery in salads, soups, and stir-fries. And like celery, they’re an excellent snack on their own. Try eating them with buffalo wings instead of celery to cut the heat.

The crispness of carrots makes them a perfect replacement for raw dishes. In soups, they’re already part of the mirepoix that forms the base of many recipes. So if you want to leave celery out, it’s easy to double the amount of carrot to replace it.

Carrots are very different in appearance from celery. They’re also sweeter and continue releasing sugars as they’re cooked. So consider these things as you decide if carrots are the right substitute for your dish.

Fennel can be a delightful substitute for celery in salads, soups, stuffings, and Bolognese sauce.

Fennel bulb lends a similar crunchy texture as celery whether raw or cooked. But since fennel has a strong flavor, I recommend slicing it paper thin on a mandoline when eating it raw.

With its fragrant hint of anise flavor, fennel won’t be an exact flavor match. Give it a try though, you might end up loving the way it enhances the flavors of your dish. Use it in the same proportions as the celery in your recipe.

An ideal summer substitute, cucumber can stand in for celery in salads, juices, and for raw snacking. Try cutting it up into spears as an accompaniment to buffalo wings or puré it into a cold soup.

Cucumber is slightly sweeter than celery in flavor and has a toothsome texture that helps it emulate celery beautifully in cold dishes. And the green color of the peel lends a similar colorful appearance if you keep the peel on.

There are a few varieties of cucumbers with varying textures and shapes. And depending on which you’re using, you may or may not need to peel them:

Use cucumber in equal amounts to the celery called for in your original recipe, and enjoy the fresh taste they bring to the table.

Asparagus can emulate celery in salads and stir-fries. It’s also a tasty choice for pureéd soups.

The green color and crisp texture of asparagus help it to stand in for celery. Its savory flavor also has a similar touch of bitterness to it.

Asparagus is best when it’s lightly cooked. It can be steamed, braised, pan-fried, or roasted in a little oil until it’s just tender.

Remember to remove and toss the woody bottom part of asparagus stalks before using them for the best texture. Then the rest can be used as a 1:1 substitute for celery.

Green apple is a fruity substitute that works in salads, juices, smoothies, and as a raw snack. For a flavorful texture contrast, chop it up into matchsticks for salads.

This replacement functions well because of its crispness and the light green color of its peel. Green apple is also juicy like celery and has the bonus of bringing an extra zing of acid to a dish.

Apple is sweeter and sourer than celery so you’ll want to avoid using this substitute in cooked dishes. This is because apples sweeten considerably when cooked and take on a mushy texture.

Broccoli stems are an easy vitamin-packed replacement for celery in stir-fries, soups, and even for raw snacking.

The flavor of broccoli has more of a robust vegetable taste than celery. Still, it goes very well with dipping sauces.

Try peeling the stems with a vegetable peeler before chopping and using it as a 1:1 substitute. Broccoli stems can even be cut into sticks, tossed with oil, and baked like french fries. Yum!

This substitute is an excellent choice for leafy or potato and tuna salads. Radishes are also refreshing as a raw snack and perfect for dipping. Daikon radish is also a great choice to use in stir-fries.

Both red and daikon radishes have a crisp, crunchy texture with high water content like celery. In addition, radishes can have a spicy flavor, so make sure you don’t mind that in your dish.

Daikon radish is a long white variety that resembles a huge carrot. They hold up well in stir-fries with brief cooking. Daikon is also great for quick-pickling and putting on banh mi sandwiches.

Jicama is a unique substitute for celery that works in juices, salads, and as a raw snack.

This tuberous root is commonly used in Mexico. It has a fabulous crunch and slightly-sweet flavor. I’d describe it as somewhere between an apple and a potato in flavor, but it doesn’t taste starchy like raw potato, either.

Jicama is best used after peeling since the skin is often waxed. Try cutting it into sticks to eat as a snack or alongside hot wings. It’s highly refreshing, much like celery.

This celery substitute is also exceptionally tasty tossed with citrus juices or salad dressings and can be used as a 1:1 replacement.

Celery root, or celeriac, is a suitable substitute for celery in soups, stews, or with roasted vegetables.

The texture of celery root is much harder than celery stalks, so it must always be peeled before use. After that, it can be used as a 1:1 replacement for celery.

This gem of Chinese cuisine can mimic the texture of celery in stir-fries, salads, and potato and chicken salads.

Water chestnuts have a watery crispness that’s true to their name and similar to celery. However, they do have a slightly sweeter flavor than celery.

Buy water chestnuts canned or fresh, and they can be traded out for celery at a 1:1 ratio.

This tiny seed from the wild celery plant can give extra flavor to soups, stews, salads, and pickle brines.

Celery seed is packed with concentrated celery-like flavor. Also, since it’s a dried spice, it’s easy to keep on hand when you need a quick dose of celery essence.

A little goes a very long way here. So start small with this spice at just a pinch or two, and add it to taste.

Pro Tip: You can also try celery salt if you have it on hand, which is celery seeds ground with salt. Simply reduce the quantity of regular salt in your recipe, and add the celery salt slowly to taste.

This cruciferous staple vegetable can substitute for celery in dishes like salads, soups, and stir-fries.

Cabbage is crunchy and can be light green or purple. It has a mild flavor that melds well with many dishes. However, once it’s cooked it has a distinct flavor and fragrance that’s not exactly like celery.

Since cabbage can cook down faster than celery, be sure not to overcook it if you want to retain some of its crispness. Of course, it can also be eaten raw and is great in salads when cut very thin.

Bell pepper is another close textural match for celery. It can work wonders in leafy salads, tuna and potato salads, stir-fries, and soups.

There are multiple colors of bell peppers to choose from, like red, green, yellow, and orange. The juicy crunchiness and mildly sweet flavor of raw bell peppers make them a splendid substitute.

One disadvantage of using bell peppers as a replacement is that the taste is quite different from celery.

Some people also have sensitivities to nightshades, which include plants like eggplant, tomato, and peppers.

If you love bell peppers and want to try them in place of celery, switch them out at a 1:1 ratio. Try cutting raw bell peppers into sticks for snacking, and dice them for salads and soups.

When you’re looking for a satisfying celery substitute, it helps to consider a few factors as you make your decision. These factors are flavor, appearance, and texture.

Appearance is another factor, especially if you’re making a raw salad or stir-fry. Consider options like bok choy, green onion, or cucumber if you want a similar appearance. Otherwise, you can use any substitute you like.

Consider how long your replacement takes to cook, what its finished texture is like, and how its flavor changes upon cooking to be certain it will work with your dish.

Celery seed has the most concentrated celery flavor, and a little goes a long way. It can also be added to a dish along with a crunchy celery substitute to get even closer to the real thing.

Green onion is an excellent celery substitute for potato salad. It contributes mild onion flavor and a nice bit of crunch.

How can I substitute celery in chicken soup?

Use diced carrots to substitute celery in chicken soup. Be aware that they do add extra sweetness the longer they cook.