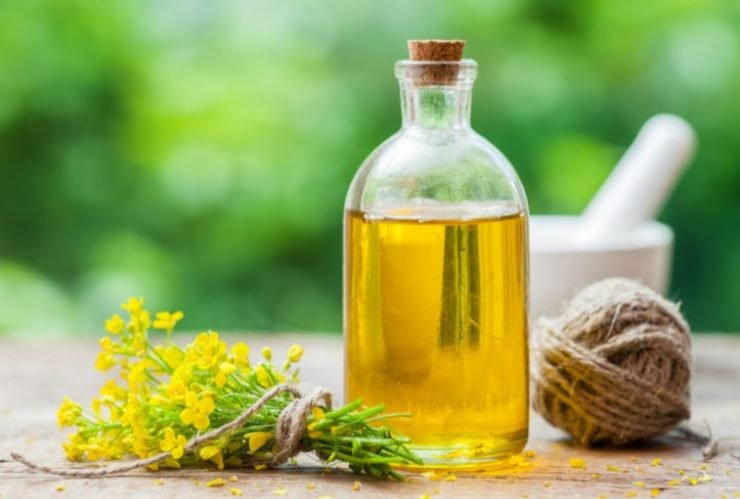 Canola oil is a versatile, all-purpose cooking oil. It’s pressed from the rapeseed plant which is a member of the brassica family. Think vegetables like broccoli, brussels sprouts, and other cabbages.

This is one of the most common and also inexpensive oils you’ll find. So there’s a good chance you’ll come across it in many recipes. But, if you run out or just don’t normally keep canola oil on hand, there’s no need to fear. There’s probably no need to make an extra trip to the store.

If you need a canola oil substitute, just look for an oil with a neutral flavor and high smoke point (at least 400 F).

To make things even easier I’ll share 7 of my favorite canola oil substitutes gathered over 10 years working in professional kitchens.

What Can I Substitute For Canola Oil?

Both sunflower oil and canola oil are pressed from the seeds of flowering plants. And while the two plants belong to different families, the oil produced is very similar when it comes to cooking applications.

Sunflower oil is very neutral in flavor and can be used as a direct substitute in any recipe that calls for canola oil. Plus, you get the added benefit of a slightly higher smoke point. 450 F compared to canola’s 400 F.

Put everything together and you get an oil that’s as close to, if not better than the real thing. All in a similar price range.

Safflower oil comes from a flowering plant in the same family as the sunflower. And I like to think of safflower oil as a slightly improved alternative.

You still get a similar neutral flavor, but safflower oil takes it up a notch or two when it comes to heat tolerance. Instead of the 400 F of canola, and the 450 F of sunflower oil, safflower oil has a smoke point of 510 F.

Safflower oil does come with a slight price increase, but it’s an excellent choice for high heat grilling, sauteing, or wok cooking.

You may not think of grapes as being a great source of cooking oil. But, grape seeds can be pressed to make what I think is one of the best all-purpose cooking oils around. And an excellent substitute or upgrade for canola oil.

I was introduced to grapeseed oil when I began cooking in professional kitchens. And I continued to find it in all of the best restaurants that I worked in.

The main thing that sets grapeseed oil apart is its light and clean taste (or lack thereof).

All of the oils on this list are technically neutral-flavoredoils. But grapeseed tends to disappear into the background better than the rest. Making it a great choice when cooking delicate seafood, or in raw applications when you don’t want an oily mouthfeel.

Light olive oil is like the less flashy cousin of extra virgin olive oil. It doesn’t have nearly the same level of flavor or fanfare, but light olive oil is a versatile cooking oil and makes a much better substitute for canola oil.

Light and extra virgin olive oil are made from the same ingredient; olives. The big difference is that light olive oil has been further refined and likely processed with heat. Resulting in oil with a more neutral flavor and a higher smoke point. Two key criteria for a good canola oil alternative.

When you buy a bottle of “vegetable oil” at the store, it can actually be made from a variety of different plant-based oils. Technically, every oil on this list (and many others) could be sold as “vegetable oil”.

Using the broad, generic name gives manufacturers the flexibility to use whatever plant-based oil or blend of oils is readily available and affordable at the time. And in some cases that may even include canola oil itself.

Some of the most common oils you’ll find sold as “vegetable oil” are soybean, corn, and palm oil. But no matter what the contents, you can count on the oil to be inexpensive, neutral in flavor, and have a smoke point between 400-450 F.

Avocado oil is a unique cooking oil in that it’s made from the pulp or flesh of the fruit rather than from seed like most other types. It’s also one of the few cooking oils that has a high smoke point while also maintaining much of its own flavor.

In fact, avocado oil has the highest smoke point of just about any other cooking oil around, reaching an incredible 520 F!

And even though you definitely get more flavor with this than with canola oil, it isn’t overpowering and can still be used as a great substitute. Just keep in mind that this is also one of the most expensive alternatives that you’ll find.

Peanut oil is another “neutral-flavored” oil that slightly bends the rules. In many cases, this oil will be made using lightly roasted peanuts, resulting in an oil that has a nutty, toasty quality to it.

The subtle taste and aroma can add just a little more depth of flavor that works particularly well when cooking different Asian cuisines. And since it can handle temperatures up to 450 F, it’s my go-to choice when making stir-fries in a carbon steel wok.

Pro Tip: Peanut oil often gets marked up in the big box and health food stores. Instead, take a trip to your local Asian market where it’s easy to find and more reasonably priced.

Canola oil is one of the more common all-purpose cooking oils around. It has a neutral flavor and a 400 F smoke point. Both qualities that are easy to find in a variety of different cooking oils.

You can use any of the substitutes on this list in equal amounts and in any recipe. Just note that avocado and peanut oil may impart more of their own flavor compared to the other alternatives.

Is Canola Oil The Same Thing As Vegetable Oil?

Vegetable oil is a generic name for any plant-based oil. Cooking oil with the “vegetable oil” name can include canola oil, but is most commonly made with soybean, corn, or palm oil.

What Are The Best Canola Oil Substitutes?

Canola oil can be substituted in equal amounts with any neutral-flavored oil with a smoke point of at least 400 F.

What Is Canola Oil Made From?

Canola oil is pressed from rapeseeds, a flowering plant in the same family as broccoli and cabbage.