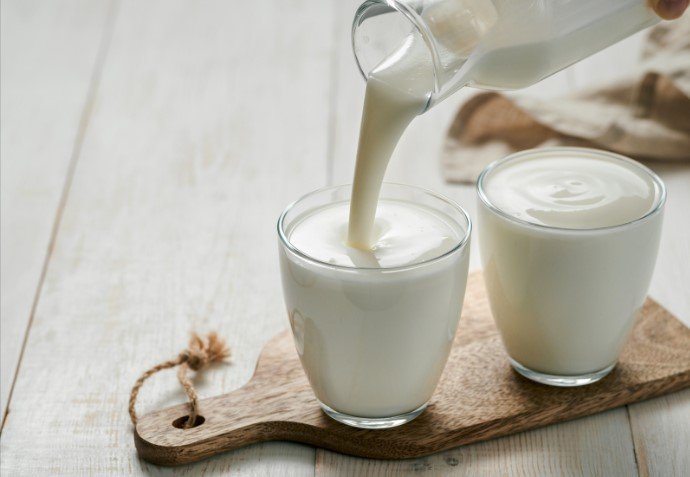 Real buttermilk imparts a rich, creamy tanginess to recipes that may seem hard to substitute. This fermented dairy product can work magic in both sweet and savory recipes.

Thanks to its high lactic acid content (acidity), it reacts with baking soda in baked goods to contribute leavening and texture.

I’ve made tons of recipes with buttermilk in my career as a pastry chef and baker. This incredible ingredient contributes fat, flavor, and tenderness to recipes like pie crust, buttermilk pancakes and waffles, cakes, biscuits, and quick breads.

You might be relieved to know that it’s easy to substitute, and you can still achieve that tenderness and rich texture that buttermilk brings via an alternative. Here are 8 of the top-performing substitutes to replace buttermilk in your recipes.

The 8 Best Substitutes for Buttermilk

If you have some milk in the fridge and vinegar on hand, then you already have one of the easiest buttermilk substitutes ready to go.

This substitute can be used in any baking recipe that calls for buttermilk, from pie doughs to cookies. The acidity in the vinegar causes the milk to thicken and curdle slightly, mimicking the texture and flavor of buttermilk.

To use this 1:1 substitute for buttermilk, measure 1 tablespoon of white vinegar into a liquid measuring cup.

Then fill the cup with milk the rest of the way, to the 1-cup measuring line.

Stir and let the mixture sit for 5 minutes to curdle. Use as directed in your recipe.

This is another simple substitution using ingredients you may already have at home. Like the milk and vinegar combination, lemon juice also has the right acidity to make milk curdle and thicken like buttermilk.

Also like the first substitute above, this can be used in any recipe that calls for buttermilk.

Measure out 1 tablespoon of lemon juice into a liquid measuring cup. Fresh lemon juice tastes best, but if you only have the bottled kind, feel free to use that.

Then fill up to the 1-cup measuring line with milk. Stir and allow the mixture to rest and curdle for 5 minutes.

Use this substitute at a 1:1 ratio for regular buttermilk.

While this fermented milk drink may not be something you already have stashed in your home fridge, it’s a close match to buttermilk due to its lactic acid content.

Kefir can be used in any recipe as a 1:1 substitute for buttermilk. I think it would work quite well in a buttermilk salad dressing recipe, too.

If your kefir seems significantly thicker than buttermilk, just add a little water or milk to get it to the right consistency.

Keep in mind that many brands of kefir are pre-sweetened and flavored, so look for the plain, unsweet kind.

4. Milk and Cream of Tartar

Finally, a use for that neglected container of cream of tartar that’s been knocking around in your spice cabinet!

Cream of tartar is easy to use to create a buttermilk substitute. It’s a flavorless, acidic powder that’s made of potassium bitartrate.

This substitute works best in baking recipes, due to how it needs to react with baking soda to function in a recipe.

Since it’s a powder, it is easier to add to the dry ingredients in your recipes than to the liquids (it will clump).

For each teaspoon of baking soda in your recipe, add 2 teaspoons of cream of tartar to replace the acid in the milk.

Add the cream of tartar with the rest of your dry ingredients, then add the milk as directed in the recipe (the milk will be at a 1:1 ratio for buttermilk).

Pro Tip: An alternative, potentially easier way to measure is as follows: for every 1 cup of milk in your recipe, add 1 ¾ teaspoons cream of tartar to your dry ingredients.

Sour cream is both creamy and high in lactic acid like buttermilk. Because of this, it makes a great substitution in any recipe.

However, because sour cream is so thick, it needs to be thinned out before using it as a substitute.

To do this, simply combine ¾ cup sour cream with ¼ cup milk or water, and whisk together until smooth.

This mixture can be used at a 1:1 ratio in any recipe calling for buttermilk.

Pro Tip: Try using a 1:1 ratio of plain yogurt to buttermilk in place of sour cream.

6. Non-Dairy Milk and Vinegar (or Lemon)

This dairy-free substitute for buttermilk works best with soy or almond milk and can be used in any baking recipe.

Your baked goods may turn out slightly less rich than they would have with buttermilk, due to the lower fat content of non-dairy milks. Despite this, they’ll still be scrumptious.

This substitute may not work well for items like salad dressings and buttermilk-based pie fillings, due to the higher water content of non-dairy milks.

To substitute 1 cup of buttermilk, use the same method as number one on this list. Add 1 tablespoon of vinegar or lemon juice to a liquid measuring cup, then fill up to the 1-cup line with your non-dairy milk of choice.

Stir well and let sit for 5 minutes until mixture thickens, then use as directed in place of buttermilk in your recipe.

Just like milk-based sour cream, vegan sour cream can come pretty close to buttermilk. It will also need to be thinned out with non-dairy milk or water.

This can be used to substitute buttermilk in any type of recipe, and could even work well for salad dressings.

For buttermilk-based pie fillings, vegan sour creams that are made with tofu or soy (check the ingredient list) will probably bake up best due to their thickening ability.

Combine ¾ cup of vegan sour cream with ¼ cup of non-dairy milk or water. Whisk in the liquid slowly, so you can control the thickness as you go.

Pro Tip: Try unsweetened vegan yogurt in place of vegan sour cream, and leave out the dairy-free milk or water.

Silken tofu has excellent thickening power and can stand in for buttermilk with a little preparation.

This substitution will work well in baking recipes. It could also be an excellent vegan substitute to use for buttermilk pie fillings since the tofu will thicken up and set upon cooking.

That being said, you will likely need to add some extra flavoring, since tofu is more of a flavor absorber–a blank slate, if you will.

Don’t be afraid to add a touch of extra vanilla, sugar, and/or spices to your recipe to make sure it turns out delicious.

To substitute for 1 cup of buttermilk, measure 1 tablespoon of lemon juice or vinegar into a liquid measuring cup. Fill up the rest of the way with water, just to the ¾ cup measuring line.

Then place ¼ cup of silken tofu in a blender. Add the water mixture slowly as you purée it to a buttermilk-like consistency.

Use at a 1:1 ratio for buttermilk.

If using non-dairy alternatives to replace buttermilk, remember that replacements that are soy-based will have the best thickening power. The only exceptions would be if you’re using vegan sour creams or yogurts, as most already contain thickening agents.

While milk-based substitutes will achieve the closest results to real buttermilk, non-dairy alternatives can also get the job done well.

As a bonus, buttermilk substitutions are all quite simple and don’t involve more than three ingredients. Have fun experimenting, and your recipe will be destined for greatness.

Can you substitute milk for buttermilk?

Yes, but not entirely. You will need to add an acidic component like lemon juice or vinegar to mimic buttermilk in a recipe.

What can you use to substitute buttermilk in a recipe?

Some options include mixing milk (or non-dairy milk) with an acidic ingredient like lemon, mixing sour cream with water, plain kefir, or mixing milk and cream of tartar.

What is a vegan substitute for buttermilk?

Measure out 1 Tbsp. lemon juice or vinegar into a measuring cup. Fill up the rest of the way to the 1-cup line with soymilk or almond milk. Use for 1 cup of buttermilk.